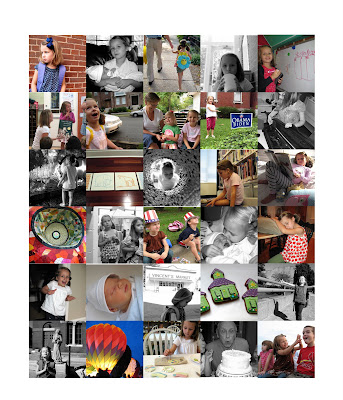 ten blocks :: new love :: backpack :: milkshake :: tally card :: birthday book :: jibber jabber :: swinging girls :: politics :: violin :: garden sculptures :: paper cuts :: bumpy tunnel :: non-fiction :: early bedtime :: glassy eye :: first day :: small parade :: big sis :: worn out :: enthusiasm :: sweet dreams :: path home :: yummy schools :: highway wind :: two angels :: balloon glow :: ceramic paint :: seventy-nine :: best friends :: thirty days
I said on the first day of this month that we were going to slow down, shift gears, take on less and enjoy more. And I can say, without hesitation that we did just that. On the surface it doesn’t really feel like we slowed down much – we started a new school, with new friends and new commitments, we started new things at church, we began and ended the month with trips and put another 1500 miles on the tab. We made gifts, we gave gifts, and we cooked enough potluck dishes to serve a small army. We’ve counted another candle on one of the oldest members of our family and added the youngest to the roster. We attended as many local events with as many local friends as we could squeeze in, and we stopped for goodies more than once on the way home from school. We purchased a new instrument, some new lights, lots of new shelves and a family calendar. We donated to a political party and put up campaign signs and made phone calls for a cause we believe in. We celebrated eight years of marriage and ten years of us and continued on projects around this engagement present we call home. We’ve learned integrity, and non-fiction, and public speaking, and asymmetry and stretched our words – we dream of being person of the week, and holding Mr. Wigglesworth, and playing the violin and cooking lunch. We’ve been hit in both cars, and rented new cars, and dreamed of giving up cars altogether. We’ve stayed up too late, awakened too early, watched too many movies, done too much laundry, eaten enough cupcakes, baked enough cupcakes, walked enough miles, had enough rain. But under the surface we did slow down, enough at least to think of something unique or compelling or humorous or mundane about each day. For each of these days we were present. I hope you enjoyed it..
And now, onward, to October!