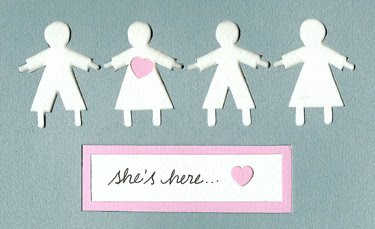 This was a part of the birth announcement that I made for E before we even knew she would be E. We didn’t wish to find out if we were having a girl or a boy, but we knew we wanted to send out an announcement immediately after she arrived – a true announcement of her birth. So I cut out the paper doll figures of boy-girl-boy-girl (perhaps inspired by that snowman card?) and I had white paper on the inside ready to receive those first few photographs of the baby and either a pink heart (in the girl) or a green heart (in the boy). I had ninety tags of pink that read “she’s here” and ninety tags of green that read “he’s here”. The template was ready on the computer with both names and when she came the pink went on and out they went. And although I nearly went mad cutting out all those tiny paper doll figures – it was a great way to wind down those last few weeks of pregnancy and get into the baby spirit. And that’s what I was searching for now, a way to get into that Christmas spirit, a way to get back into the swing of things, a way to prepare myself and to reach out to those that I love and that I think of throughout the year.
…
We’re all about three around here. We love our three floors, we love this unit of three, I find a sense of balance and order and symmetry in groups of three. It’s a comfortable number, it’s a number that we are used to, and a number that provides us balance and stability. But as I looked through those old cards, and thought about where we were going in this next year, I found comfort and balance and stability, and excitement in those four paper doll cut outs. For we were about to become four. My step-by-step making of those gingerbread men, the message of preparation and anticipation of the season, and of what was to come – that was the real message – blatant or subtle – that I wished to get across in this year’s card. It was perfect. It was secret. But it was there. And so the card making began.
…
We are expecting the fourth member of our family in July. We first learned the news on the morning that I knocked on doors and hung fliers on doorknobs in late October for the upcoming election. We painted a shirt with “HOPE” on it and held our own private “hope” close to ourselves, close to our heart. We’ve put five thousand miles on our car since Thanksgiving, and my family has endured my endless, racking sickness along each of those endless miles. I drastically cut my holiday to-do list down, turned off all guilt responses to anything left undone by day 25, and truly tried to live out the message within that card. We’re slowing down, we’re taking care of ourselves, I’m being taken care of by two of the most generous, compassionate people that I know. I am lucky. We are lucky. And soon we will be four.