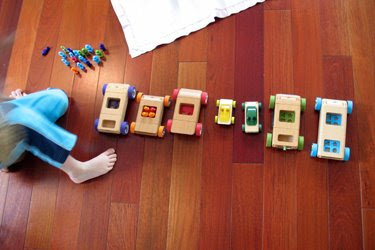 Saturday, while we cleaned and painted and rearranged for the photo shoot, E played in the back bedroom with her favorite cars. It was “field trip day” and the chaperones were lined up outside ready to go. I’m not kidding – she spent forty-five minutes in deep debates between all the plastic people as to how the various groups were going to divvy up the seats. I think everyone had a different voice and name as well… and they weren’t as simple as Miss Scarlet or Professor Plum. (The purple guy off to the side was quite literally throwing a tantrum in protest.) I’m not sure if they actually made it to their destination or not. The entire drama seemed to revolve around the carpooling. It was intense. I hope she doesn’t grow up to be a homeroom coordinator. The other parents will strangle her.
Update: Apparently the day went from difficult to really, really unfortunate. Later I walked in and found the school transportation looking like this. Maybe next time they’ll just take the city bus. 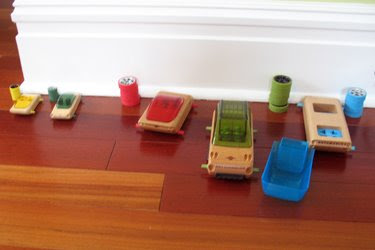