We’ve gotten serious about some projects around the house here. Over the last nine (?!?) years we’ve had periods of intense construction and some lengthy lulls in the action. Once we got through the initial period of just trying to turn a condemned property into some kind of livable space, we worked on projects as we had the time or the energy or the money (mostly that) or the initiative. And while it’s been a lot of work, and a lot of living amongst the work, it has been pretty exciting to slowly move into all the spaces that this house has to offer. Most people move into a house with a certain number of rooms and a finite boundary. We’ve sort of seeped into this place, living first as newlyweds in a three room flat on the first floor, then enjoying the novelty of our own second floor bedroom and bathroom that weren’t also a dining room by day, and even more fun, moving up another floor to that attic nursery in the sky. Just completing the back room on the third floor gave us another space to hang out in, to work on projects in, and to have people over without having to trip over bodies on air mattresses all weekend. So what’s left?
Well, I started into a lengthy description of the layout of our house, and then thought I could probably explain it a lot better with a five minute sketch so here it is: 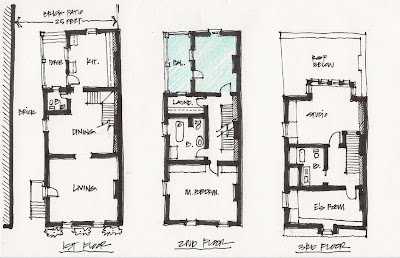 Our house is really quite a simple house. Our entire property is only 25′ wide, and our house is 18.5′ of that – the leftover is the brick walkway between our house and the neighbors’ and our front and back entries are on this side. The other side of our house is our actual property line and our neighbors’ house on that side is about three feet away. So in order to look at our west wall from the outside you have to go into their yard. It’s a three story brick wall with no windows at all, just three chimneys going all the way up. The interior layout is very simple. Three rooms, one behind the other, the front two are square, and the back one is equal in length, but more narrow, because a portion of the back square is exterior deck / balcony.
When we purchased the house it was a two-family home (an abandoned two-family home). The first floor had three rooms – parlor / bedroom / kitchen and the second floor was exactly the same except that you accessed the second floor space from a back stair that took up most of the deck area. There was no interior stair connecting the two. The “kitchens” consisted of rooms with a simple sink and drainboard (reused in E’s bathroom) and a wood burning stove that would have sat out in front of the chimney and vented to it through an exposed pipe. There were no bathrooms originally, although a full bath was squeezed into the corner of each middle room at some later point. The attic was accessed by a very tiny stair that was housed in that bump out that you see now at the back of the third floor studio. You entered the stair from a teeny tiny door off the second floor balcony, so both the attic space and the dirt floor basement were shared by both tenants. We own one of the simpler houses on our block, but most houses in the area had multiple families living in them, which was par for the course at the time. A lot have been converted to single family homes now, but many still retain their multi-family status which truly means we live in a mixed-use neighborhood. I’m getting off track here a bit though…
We added the interior stairs, and turned the first floor full bath into a half bath. We did a bit more chopping with the second floor, making the middle room a stair hall plus master bath and laundry area. The front and rear rooms remained the same. The third floor is only the size of the front two rooms, and was always one large attic space. We took essentially the footprint of two of the square rooms from the floors below and fit in two bedrooms and another bathroom. E’s room is the front room behind the mansard roof with the dormer. The back room has the rebuilt bump out where the former attic stair was (now filled in). The bathroom is in between the two, and the small room behind the sink houses the furnace for the second and third floors – all duct work is hidden along the floor underneath all the built-in wardrobes on this floor. The first floor is served by a furnace in the basement.
The room that has been undone for over nine years is that back room (and balcony) on the second floor – shown in aqua. We did a minor amount of work on it initially, but eventually it became our storage / workshop as the rest of the house became more and more complete. Once we waterproofed our basement and poured a concrete floor over the dirt we’ve moved our storage and workshop down there. So the room has been standing there, empty and forlorn, just waiting for us to finish it. It’s got the extra bonus of having a balcony attached to it (also unfinished) although all the framing is in place – it just lacks a floor and a railing. We’re going to install removable screens behind the railings on this floor so that we can enjoy the space bug free. The house has a really great air flow to it and when you open a few key windows at the top and bottom the wind really carries through the house cooling things down nicely. We’re looking forward to sitting out on that balcony, enjoying the shade and the breeze with that new baby.
So, if you look back at that post around Valentine’s Day when I mentioned the new drywall – that was the area where we removed the old attic stair and then hadn’t touched since. M’s been working on the walls in there for the past couple of weekends, and we’re getting close to door and window work. Once it gets nice outside we’ll move onto the balcony. We’ve been discussing our “plans” for these areas for awhile now, and last weekend E got up and announced that she wanted to work on some “plans” too. She has sketched up various ideas for how the new back room can be used, including one plan that involved constructing a wall down the center to make an adult side and a kid side (Sketch one, below). She’s done elevations of walls throughout the house showing areas that she’d like chalkboard paint and tack boards for her artwork. (Sketch two, below.) She even drew one section of the hazards that might befall the person who tries to stand on the current floor joists on the balcony with no floor. (Sketch three, below, showing the person falling through to the deck below. She’s titled this one “Balcony Floor” and written “yes” at the bottom because we reached consensus on this one.) And she’s constantly coming up with clever ways of displaying portraits of our family-to-be, enjoying – no, really savoring, the symmetrical possibilities of a family of four. (Sketch four, below.) 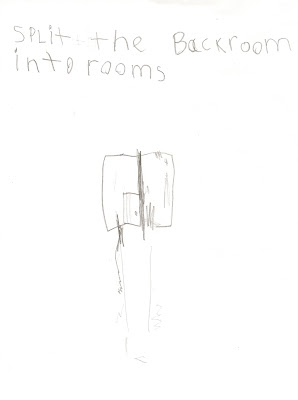 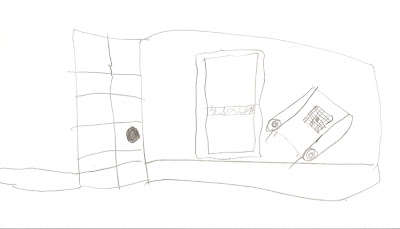 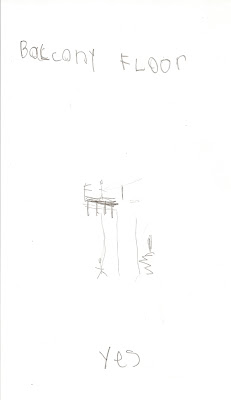 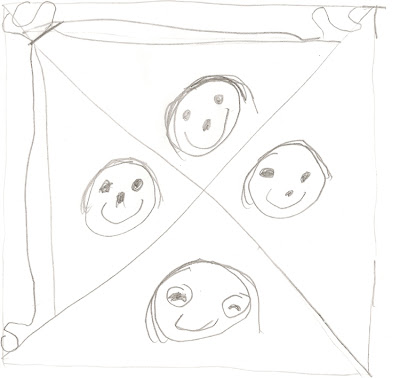 Where’s the baby going? And what are we going to do with that second floor back room? Another post, another day. And I’m sure we’ll have a sketch to illustrate it.

1 thought on “the best laid plans”