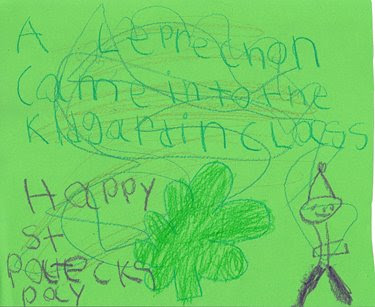 Friday was a really exciting day in the kindergarten class. While the kids were outside playing and their teacher was “running an errand” a leprechaun managed to get into their classroom and wreak havoc. The art center was a mess, chairs were overturned and a note was left on the marker board. The kids spent the afternoon working together on a trap that will hopefully catch him if he returns over the break. And they must have read plenty of leprechaun lore because E knew loads of information on just how to trap them and keep them and get rid of them.
Unfortunately, later that night, all the excitement from earlier in the day turned against us as bedtime came and went. I noticed that she wasn’t falling asleep after her reading lamp turned off – a few times I checked in on her and she was sitting straight up in bed, as if on watch for the night. After about an hour I asked her what was up, and she confessed that she was a bit nervous a leprechaun might show up in her house that night. I had to walk that fine line again – the kind you walk when trying to keep the mystery of Santa and the tooth fairy and the Easter bunny alive, while not getting so caught up in the details of the magic that it’s impossible to sleep. Every possible bit of rational thought that I sent her way was contradicted by some fact (of fiction) that she threw back at me. I’ll say one thing – when a small green legend visits her classroom, they sure do their research. Here’s a sketch of the trap the class constructed for the big catch… 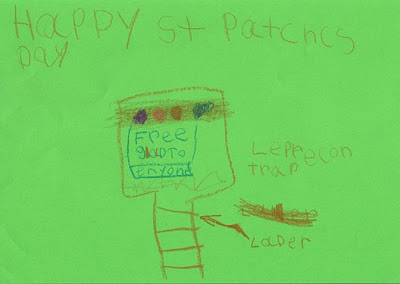 Finally I asked her what I could do to make her more comfortable so that she could go to sleep. “Build a trap, mom – it’s the only way. There’s no way you’re going to convince me that one can’t get in, so you might as well just build a trap to catch it when it does.”
The next day the leprechaun jitters were gone, just like the tooth fairy unease and Santa confusion fades with the discovery of the coin or the presents. In this case, the leprechaun didn’t leave any loot, but the story of how one managed to sneak into the kindergarten class was treasure enough.
Happy St. Patrick’s Day.