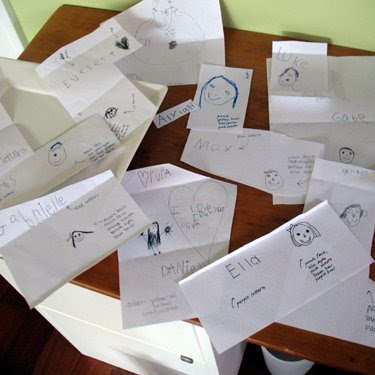 This little end of the year teacher’s gift has turned out to be a very fun project. We decided to do a platter that all the kids could contribute to – a gift made that more special because E’s teacher is moving out of state this summer, and this will help commemorate both a great year with this class, and her time at the school. I thought about the process for awhile, trying to make it as easy as possible for all the kids and their families, and how to end up with a great final product that will be fun to display. Getting fourteen kindergartners together to paint on one plate didn’t seem very practical or precise, so I had them all submit ink or pencil line drawings of their face and their best “signature”. They gave me (very) detailed instructions on what color each line should be. So step one was collecting these items and throwing them all out on the desk. 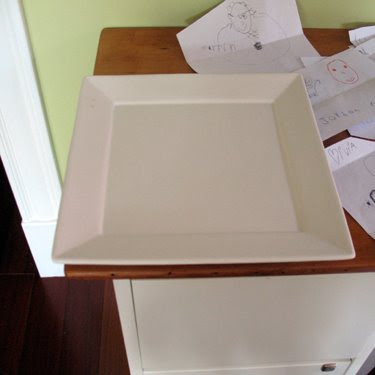 Step two was choosing a nice platter and bringing it home with me, along with some very handy ceramic transfer paper. The paper looks like regular vellum but it works a lot like carbon paper – you place it on the plate, put the original drawing on top of it, and then carefully trace over the lines. But before I could start the transfer I had to get some sort of semblance of order to this thing so I started with a few sketches. 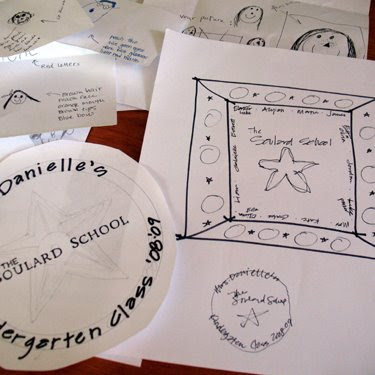 Step three: Once I had some general sketch layouts I was ready to begin. 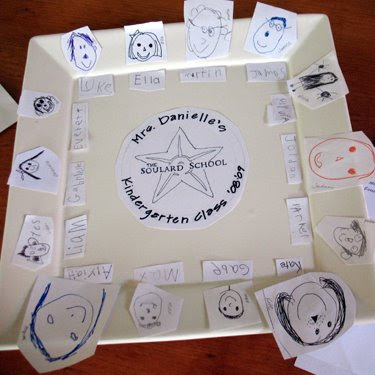 Step four: I first cut out all the names and the faces after writing down the color choices on another sheet of paper. I didn’t want to get anyone mixed up. I enlarged or reduced a few of the names on the copier so that they were all the same scale and I placed them around the plate so that the different colors were pretty evenly dispersed, and the longer names went on the sides with less of them. I then laid out the faces and determined which ones needed to be reduced to fit. 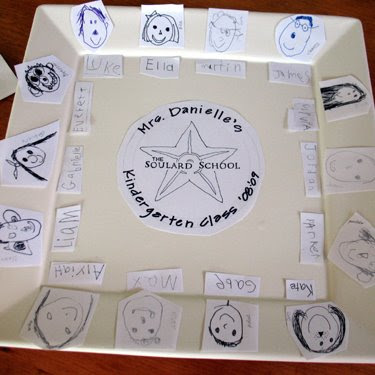 Step five: I reduced the faces and tweaked the final layout including the center logo design. I was getting pretty happy with the overall look but thought that the inside looked a little too “grown-up” compared to the border, so I had E rewrite the letters in the logo so that they had a kindergarten look about them. 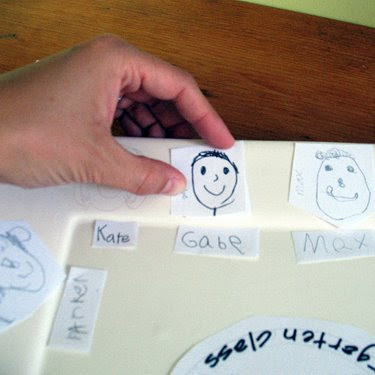 Step six was the fun part. I cut pieces of the transfer paper to match the size of each sketch, and one by one I went around the plate carefully tracing over each line that the kids made. Each face was unique, and looked so much like each one of the kids. And I knew that their teacher would recognize each individual name – if there’s one thing these kids know how to do (and do well) it’s writing! 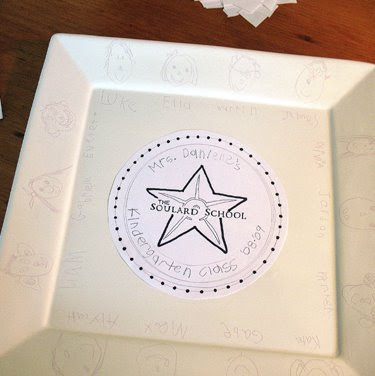 Step seven: Once the outside drawings were complete I was ready to trace the middle logo. You can see in the photo above the light purple lines from the transfer paper. These lines burn off in the firing process, which makes this a really fool-proof way to get an idea from paper to plate. 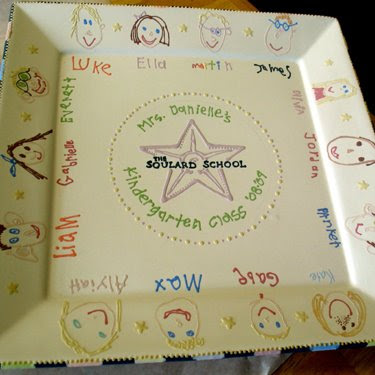 This morning I did step eight – I took it into the pottery studio, and took over about twenty-five of their colors and started tracing over the lines. This process was made easier on most of the colors because they had small dispensers that allowed very precise applications over thin lines. A few of the colors had to be done with a very tiny brush which I took with me. The back has a note to the teacher and is “signed” by all the kids. The colors are fairly muted in this photo – they become much purer and brighter when fired. The final product will be done later this week and we’ll present it on Friday, the last day of school. I’ll post photos then, as well as a link to a friend and co-worker of mine who does this kind of custom work all the time, even for out-of-town clients. If you think you might want to tackle something like this for yourself, you can give her a call. One platter is enough for me now – although I was pretty tempted to make one for myself after seeing how this one turned out!