I’ve tried my best since we went to the beach mid-March to walk at least three miles a day. That’s been a tricky sort of thing during these very rainy months – I’ve walked more than once under an umbrella. The nice part about this spring has been the cooler temperatures though – I don’t mind the rain so much when the flowers are so beautiful and the days warm to the low 70’s. But starting about Wednesday this week we moved into some sort of tropical rain forest climate – temps in the high nineties with ridiculous levels of humidity and rushing torrents of water every night sometime after midnight. Walking around in that kind of weather was just not working, so I decided to do it one day at the mall. And while the walking might be great for the body, it’s killer on the pocket book. Case in point – this little number. 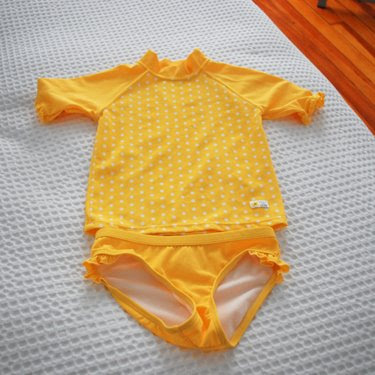 The long wished for swim shirt was just calling our name from the Janie and Jack sale rack. E nearly skipped out of that store and it took a lot of convincing to get her back out of the suit later on that night. We found other treasures that we just couldn’t live without, including the purchase of wooden child sized hangers from a PBK store that was going out of business. By the time we were done with our laps we were getting the added benefit of some arm weights as well. But the swimsuit was a great deal, and just in time for her week’s vacation at the lake with her grandparents and cousins. The week that the new baby is absolutely forbidden to be born in.
I decided, on the other hand, to hit the sidewalk at seven this morning before the worst of the humidity set it. I can’t afford another exercise session like the last one – sales or no sales!