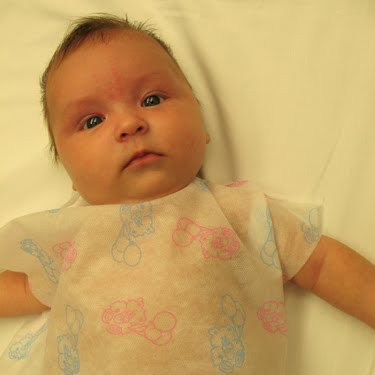 When E was just shy of four months old she caught the flu. Too young for the flu shot herself, the particularly nasty strain that year got her and gave her a nasty fever. She fell into a restless nap with a temperature hovering around 101, and when we felt her an hour or so later she felt like she was on fire and might burst into flames at any moment. We tried to rouse her, but she was lethargic at best, unresponsive to most of our frantic attempts to get her attention. One of us took her temperature while the other called the after hours exchange – it was late Saturday afternoon, and when the thermometer rose above the 105 mark we knew where we were headed. That was a very long and stressful night – first at the ER where our baby girl endured a spinal tap to rule out meningitis, and then admitted into the packed hospital teeming with other children battling the flu and RSV. It was thirty hours before we talked to anyone face to face without a mask on.
Last week was nowhere near the experience we had six years ago. The baby was registering a fever of just over 100 degrees, but for a baby of two months that still warranted a trip to the pediatrician. With an older child you breathe a sigh of relief when the chest and the ears get a clean bill of health, and you are sent home antibiotic free to wait out the duration of the virus that your child has picked up. With a little baby they don’t wait it out to see if they’ll get better or worse. They have to eliminate the possibility of a bacterial infection, and so the poking and prodding begins. What a difficult few hours it was for the three of us, but in the end she’s doing fine and improving each day – enough so that she was able to get her delayed vaccinations on Monday. We can’t protect her from everything, and I dread the upcoming flu season like you wouldn’t believe, but it does feel good knowing that we are starting on that path of resistance to a lot of nasty things. It’s just too bad that this kind of peace of mind has to come from the very sharp tip of a needle.
Here are some sweet sister shots to cheer you up from all that needle talk. 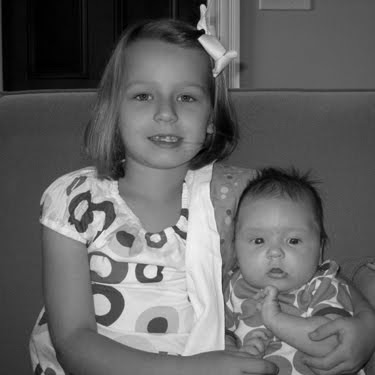 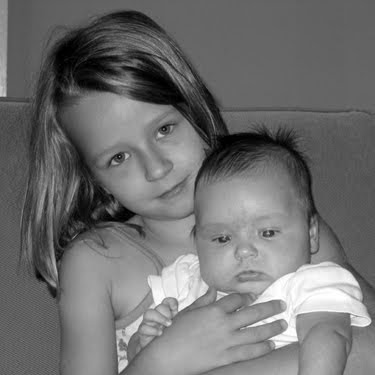