A few days ago my husband was checking in on my blog stats and he shot me an email soon afterwards. “Hey, I was the 10,000th visit – what’s my prize?” he asked. Ten thousandth? Wow. That’s a big number. Prize, hmmm. What kind of prize… How about the fact that I cleaned the upstairs bathroom while the baby napped?

I might have missed the number 10,000, but the fact is, I’ve always noticed numbers. I might go weeks without glancing down at the odometer on the car, but I never miss 40,000 or 50,000 and I have a knack for getting the babyseat back in the car, one of the two strollers we store in our trunk muscled back into its spot, the diaperbag thrown in the front passenger seat and then a quick jog around to the front seat, key in ignition, air conditioning cranked up, NPR turned down and then I glance at the clock and its 11:11. Almost daily, I swear this happens. My daughter (bless her little 10 week old soul) goes to bed now around 7:00pm and starts peeping eleven and a half hours later. When it gets loud enough to rouse me, and I blink enough to clearly see the clock it’s always 6:23. She falls quiet, I roll over, and then she’s back again on the sound system at 6:37. I walk into her room, see her wriggling in her crib with delight that I’ve returned again for yet another day, and when I pick her up, snuggle my face up against hers and turn around to turn off the nightlight, the hands on the Curious George clock she’s hijacked from her sister are always pointed exactly at a quarter til seven. In line at the grocery store on Sunday, the woman in front of me had groceries totalling $97.98. The ingredients I was purchasing for a housewarming dinner for friends, snacks for E’s school, a few gallons of milk and the last of the season’s peaches beeped across the scanner, finally adding up to $98.99. “Hey,” I laughed. “What a series of numbers.” The clerk smiled and said she had noticed too. She lowered her voice to almost a whisper and said reverently “Once, I had a total of exactly one hundred dollars…twice in a row.” It was my turn to be amazed.

When I turned thirty-one a few years back, my husband gave me gifts that were all in prime numbers, and wrapped them in paper he had made with the largest prime number spelled out on it. “Always in my prime, never past it,” he had assured me. Corny, but cute. I’m sure the florist thought him a bit odd when he asked for just eleven roses.

The year 2000 was a pretty monumental year for us, and not just because it marked the turn of the millennium. We bought our wreck of a house that year, got engaged that year, planned and executed a wedding while living in two different states and marrying in a different one entirely, and lived for seventeen days, four hours, thirty-six minutes and four seconds without indoor plumbing, but really, who’s counting? Having such a big year makes it easy to remember how long we’ve been at something. “How long have you two been working on that house?” (Nine years, yikes.) And we’ve been working on this marriage the same amount of time. In both cases it was (sort of) love at first sight. The house had good bones, a host of complications but endless possibilities. We both had our own lives, careers in different cities, other relationships and various complications of our own, but an instant friendship and connection soon developed into so much more. Like the progress on the house, we’ve had stretches of time when we put in the hard work – the long hours, the back and forth, the compromises and the stress. Times when one of us just needs a break and can’t go on another step, or paint another wall, or make it through another day and the other steps in and finishes up, holds things together, cheers the other onto a happier place. And then we’ve had plenty of times that follow where we come through on the other side and just sit back and enjoy it for awhile, marveling at the spaces we’ve created, the daughters we share, the moments we have together as the very best of partners and friends. Nine years ago this very moment we were newly married, dancing under a tent with the horns playing behind us, looking forward to a few more hours in Italian silk and rented shoes, eight more days to sit on a dock at sunset as newlyweds, thirty-five months until we saw our daughter for the first time and another seventy-one until we held our second one.

Nine years that I’ve been lucky enough to share a home, and a life, with you. 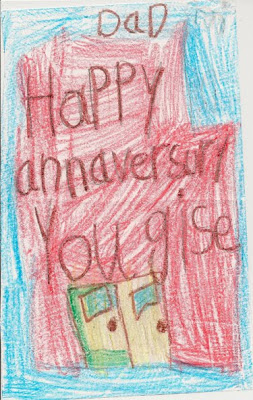