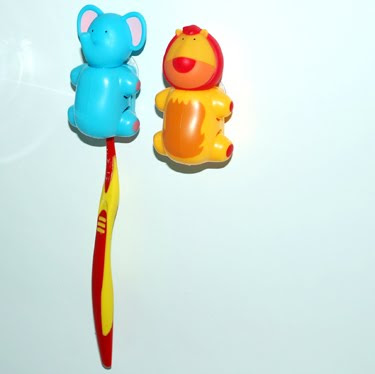 The kids received these from a friend of mine yesterday. E was so excited when I gave them to her and immediately staked a claim on both. I tempered that excitement a bit when I told her that one was for her little sister, so she declared that she wanted the elephant for herself. I asked her to first discuss it with F and make a decision, and she went over to her and held them both up. The baby locked eyes on the elephant and didn’t blink. E and I went upstairs to try them out in the bathroom and she asked on the way up “Did you notice how she couldn’t stop looking at the elephant?” I told her that I had noticed, thinking that the issue was decided. And in her mind it was.
“Well, that settles it,” she declared as we reached the top of the stairs. “She’s going to love the lion.”