I think the idea of setting resolutions every January is a bit odd, particularly since a lot of them don’t seem to last much more than the first week or so of the year. How many days did you get up an hour earlier to run outside in the subzero weather? And if you did actually do that, I really don’t want to know about it. But there is something to the start of the new year and the end of the hectic holidays that begs for a fresh start. I think part of it is that desire to clean up (the holiday stuff), clean out (the stuff that you didn’t touch over the past year) and reboot (just getting your stuff together). You get some new things from friends and family, you eat a few too many Christmas cookies and so you need to make some room in your closets and your pants for the new year. A few years back we resolved to make less waste, recycle more, reuse a LOT more, and we’ve not only kept to that, I think we’ve excelled at it. It informs our shopping, our eating, our gifting and our living in more ways than we can count. I’m not quite sure what I resolved to do last year except maybe to survive morning sickness and somehow manage to give birth to a healthy baby with no drugs and live through the first six weeks of postpartum torture. So I guess I stuck to that as well, but very little else. This year I decided to approach it a bit differently. We’ve been finding ourselves rather joyful around here – having this baby around has made us much calmer, much happier, much more content. So I’ve sort of lacked that yearning desire to mix things up. I kind of like them the way they are. However, there are a few (relatively minor) things that pop up unexpectedly that really just annoy me – little things that can wreck a smooth morning before work, or a fun afternoon out and about, or bug me a little while I feed a sleepy baby before bed. So I thought I’d try to tackle some of those little things and see how much better things operate with them out of the way. I guess the overall resolution then is to take care of the little lists and the tiny hiccups, and move on to the better things in life.
I’ll highlight a few over the next week or two – in no particular order – just the way they happen to get photographed.
…..
This is the wall I look at from the rocking chair in the baby’s room. I’ve had a collection of things piling up on this desk area since she was born, and the photo below was taken several months ago. 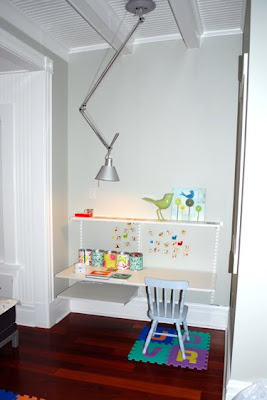 The wall was painted with magnetic paint awhile back and then painted over with the wall paint, so there really was no excuse not to get things off the desk and on the wall. Actually, there was an excuse – when the baby is awake we like to hang out with her, and when she’s asleep – well, she’s asleep. You could title this first resolution “Ignore the fact that the baby is sleeping and take advantage of the fact that she’s…sleeping.” So hammer in hand (there are only five nails – the rest is magnetic) I assembled and reassembled the wall while she slept. 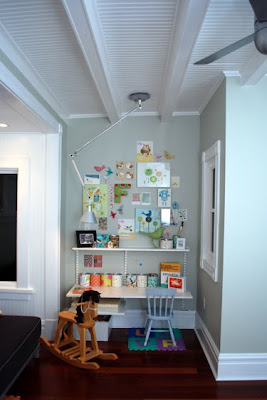 For a few nights I would move things around this way and that, stand back and look at it for awhile, throw some more laundry in, pick up a few things off the floor, and then move something again. I did that for five nights over a week and a half, and I’m pretty much satisfied with the composition. It’s easy-peasy to move around though, and add or subtract at will, and the square frame in the bottom right corner with the black and white mouth will hold the artwork that E did for her sister that didn’t quite get done before Christmas. (There are always a few of those things.) Perhaps finishing that should be on her resolution list. 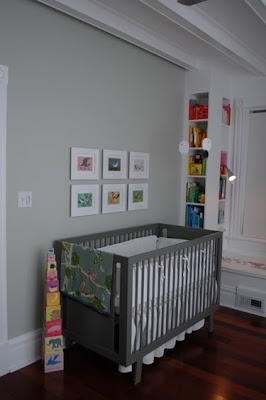 Nothing really new on the crib wall, just figured since the baby was sleeping and I was lighting her room up with my speed light like the fourth of July, I’d take a few more shots. So there it is. A nice view of a lot of birdie things that I enjoy while rocking that sweet baby of mine. 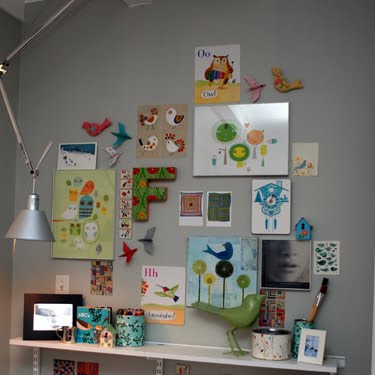