So we’ve happily been laundering in our house now for five days, and it is so very blissful that I’ve nearly forgotten the two months prior that we were without machine.
In that same sort of way that mothers forget the pain of childbirth soon after the baby is born.
Yeah, right. We don’t forget.
But I will say that in this blissful state many other things that would normally nag and bother don’t seem to be such a big deal. It’s always easier to look on the bright side when your own whites are on the bright side.
So blissful in fact, that you forget to…say… pick up your own child from school. But that’s another story for another day.
For those of you that have been waiting on the edge of your seat for the laundry room redo lowdown, let’s first take a moment to recap:
Last week of January: our combination washer/dryer spun its last load in a raucous manner that shook the very walls around us and then went up into flames. (Not really flames, but a definite burning smell.) It was perfect timing since we were about to have fourteen people staying in our house a couple of days later. People that probably would prefer clean sheets. People that use towels when they shower. After the weekend we started researching models that would work in our predefined space. Only four did.
Two sets cost nearly five thousand dollars a set.
Five thousand dollars is a lot of money.
We chose cheaper, at least by a bit, and boosted the economy – at least briefly – in a locally owned appliance store. The units arrived 10 days later, with only one incorrect part that had to be returned. Our buddy J helped to carry them upstairs. They are not light. Ask him, he’ll tell you. 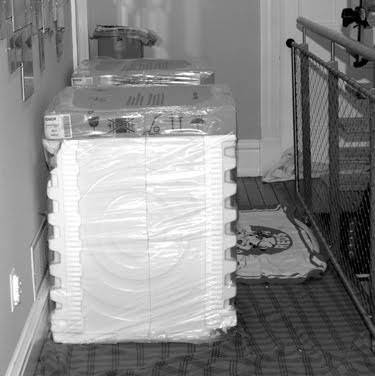 We worked on the design of the room now that we were using two machines, not one. I modeled the room with the existing cabinets and came up with several options. We chose this one. 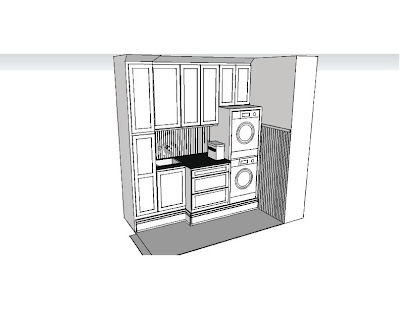 Demolition began, and then everything started to get moved around. Shut off valves and hot and cold water hookups were moved. It’s a lot of copper. 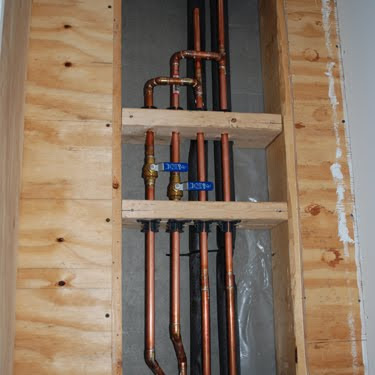 Countertop was cut in place. 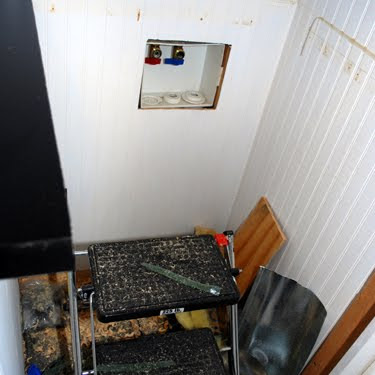 Parts were purchased and organized. Weekly trips were made to the laundromat where $20 will get a week’s worth of laundry washed and partially dried and even less partially cleaned. E got the stomach flu in the middle of this. We threw some laundry away. 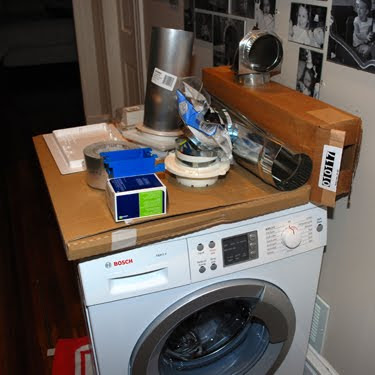 A new vent to the exterior was installed and three layers of brick and some plaster were drilled through with no great catastrophe. The initial area of drywall removed was between the green dots. And naturally there was a vent pipe running through the wall at that very point. So a little more drywall was removed above and below, another trip to the hardware store, and the straight run became a slightly curved run. (See a bit of the pink plaster remaining back there? Lovely.) 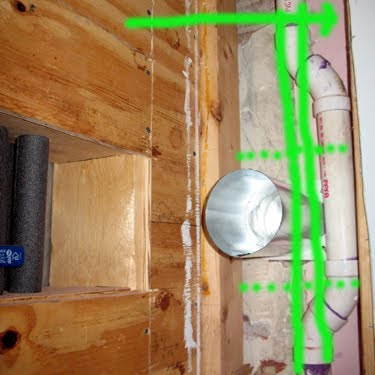 New drywall around the new vent. Gigantic ladder rented from the hardware store to install the vent cap on the exterior of the house. Once up there he noticed a few other things that needed a little TLC and spent an afternoon patching and repairing. 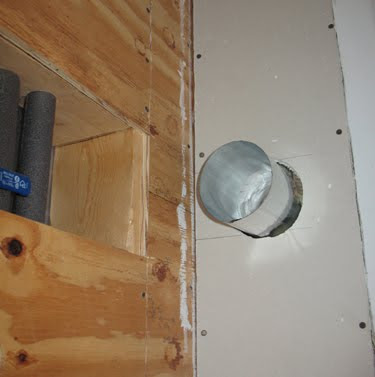 The original cabinet above the old unit was the same height as the other upper cabinets. M took the cabinet down to our friend J’s workshop and shortened it – including the shaker style door. And you can’t even tell, it’s that perfectly done. An afternoon of work, a night of glue drying, some follow up work, sanding, priming, the works… 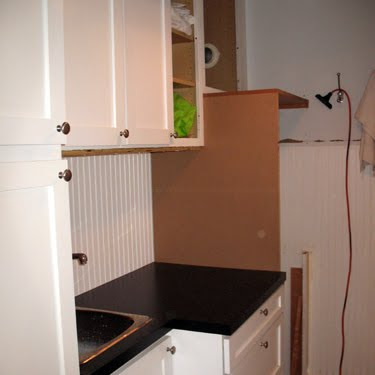 Power turned off and new outlet wired and installed – the old machine plugged into to a standard 120v. 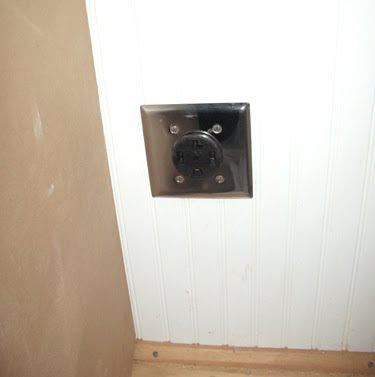 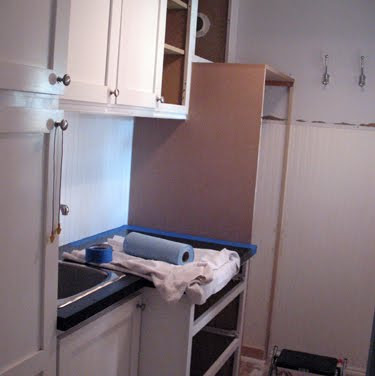 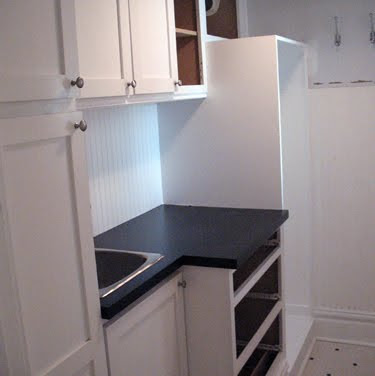 And now the heavy stuff. The platform is one we used before to service the unit which sits about nine inches above the floor. M picked up the washing machine by himself and carried it from the hallway to the top of this platform. I don’t know how. I couldn’t watch. Next came the stacking unit with a pull out shelf, and then the dryer. And this was just to make sure it was all going to work before hooking it all up. He then lifted the dryer back off, lifted the washer into place (on top of a small rubber mat to absorb some of the sound of the units) and hooked the machine up in the rear by accessing what he needed through strategically cut holes in the rear of the drawer unit to the left. The stacking unit went back on and then the dryer was lifted back up and carried forward, into the hole, and then centered on the stacking unit. More hookups in the rear through the tiny access holes. Concern expressed by M at how much the stacked unit moves on the rubber mat. Decision made to uninstall, lift ridiculously heavy units back out and into the hallway, remove the rubber mat. Rinse. Repeat. I bit my tongue and left the room. It was just too painful to watch. 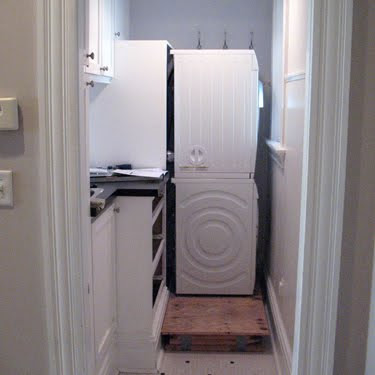 Stacked for the third time, in place for the second time, cautious optimism on my part for the first time. 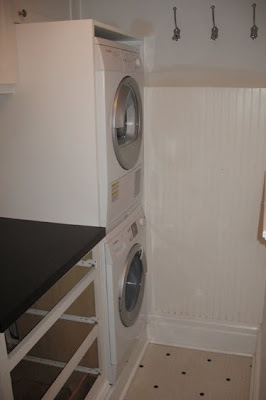 Ductwork and vent assembly installed at the rear of the dryer through precut access holes in the modified cabinet. Clean, precise, can you even find the splice on that cabinet front? Drywall patched and sanded where old trim was removed. 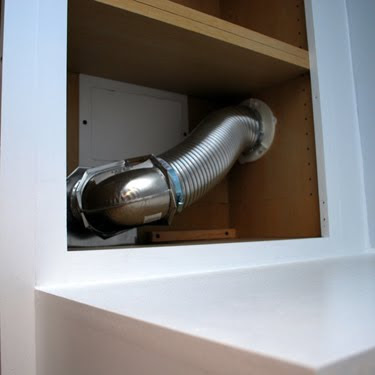 What’s left to do? It’s been nine years since we did this room the first time and the whole thing is in need of some paint, and there’s still some final trim to go around the unit and the new surround. The cabinet doors and drawer fronts are all off and I bought some trim paint and a new color wall paint and you can find us with paint brush in hand this weekend. 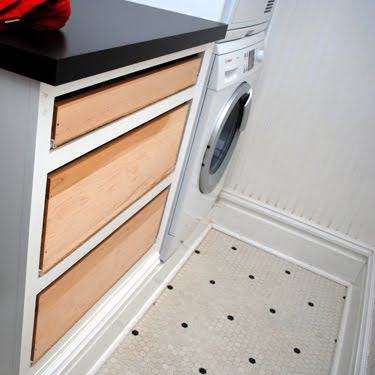 But a little scuffed and worn paint job doesn’t prevent the laundry from working, and work it has. 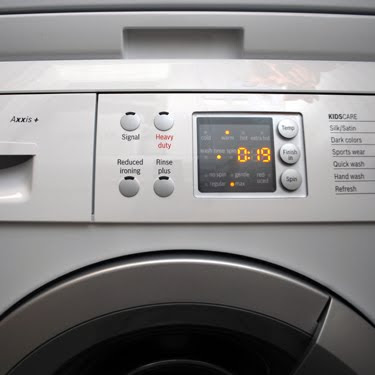 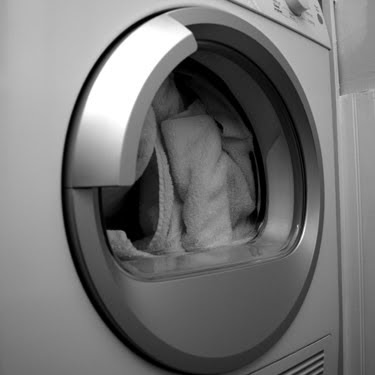 I have known my husband for over twelve years and I’ve always been amazed at what he can do. And still he amazes me – in the little ways and the big ways. On the grand scale of things to worry about, laundry should be a little thing, and for the most part it is. But sometimes it is a big thing, and I know just the guy who’s up to the job. Thanks for all your hard work.