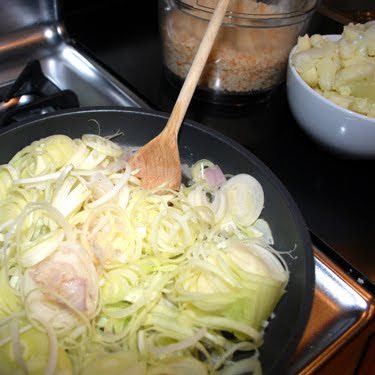 We’ve found this really good dish which pairs the early spring feeling of leeks and shallots and cauliflower with the late winter feeling of a rich, satisfying meal. Cauliflower gratin with Gruyere and leeks. I came across it once when trying to figure out what to do with some leftover leeks. Looking up leeks in America’s Test Kitchen Family Cookbook yielded this recipe, which luckily also used up the rest of the fresh thyme and the leftover heavy cream I had in the fridge from some other recipes. Few things are as exciting in this house as scoring a new recipe that mops up multiple leftover ingredients from other dishes. Good times, I tell you.
It’s very easy to make. Tear up four slices of a really high quality white bread (we don’t often buy this, but we used the rest to make the BEST grilled cheese sandwiches ever, so treat yourself to a really good loaf). Pour two melted tablespoons of unsalted butter and a little salt (1/4t) and pepper (1/8t) over the bread and pulse six times in a food processor to make a coarse crumb. Turn the oven on to 450 with a rack in the middle. Set four quarts of water with a generous pinch of salt to boil on the stove.
Thinly slice the leeks – two nice sized ones will do it once you pulled off the outer layer. Mince one shallot and cut a two pound head of cauliflower into one inch florets. Toss the cauliflower into the boiling water for four minutes, rinse with cool water and drain completely.
Melt two more tablespoons of butter in a big skillet over medium heat. Add the shallot and the leeks and cook for about two minutes, then the garlic and cook for another 30 seconds or so. Stir in one tablespoon of flour, whisk in 1.5 cups of heavy cream and bring to a boil. Once it’s boiling, stir in 1/2 cup shredded Gruyere, 1 teaspoon of minced fresh thyme, a pinch each of nutmeg, cayenne pepper, salt and pepper. Turn off the heat and stir in the cooked cauliflower. Pour it all into a 7×11 casserole dish, sprinkle with the breadcrumbs and another 1/4 cup of Gruyere. Bake until golden brown and the sauce is bubbling. Serve hot and make sure each scoop has the bread crumb topping. Reheats magnificently for lunch the next day. Enjoy in this season between the cool and the hot.

5 thoughts on “in between”