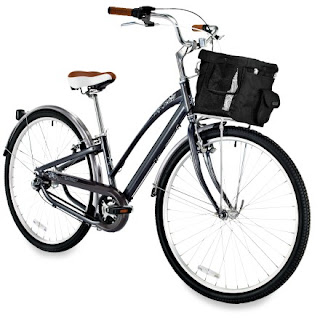 In all the excitement of my Mother’s Day poetry, I forgot to mention that I also received a bike.  Well, not actually.  I really received a helmet and the invitation to pick out my own bike.  And that’s probably much better than unwrapping an unwieldy package with a giant bow since the first bike that I fell in love with didn’t fare well so well on my test drive.
I haven’t had a bike in years.  Many years.  The last bike I “owned” was really just a loner men’s bike from a previous boyfriend.  That should tell you how long ago it’s been.  I kept it chained up to a pipe in the basement garage of my first graduate school apartment, and really only rode it to and from campus in my pre-car days.  For all I know, it’s still chained to that same pipe.  I kind of forgot it when I moved and didn’t have that boyfriend around anymore to remind me of it.
My first real bike was a Schwinn bicycle that was pink and white and cost $110.00 in roughly the year 1983.  I won it in a coloring contest, of all things – my rendition of Snow White (to which I added some patches on her dress, a bit of dirt smeared on her face from running through the forest, and a little background scenery to enhance the scene) must of caught the eyes of the judges enough to award me the prize.  We were eating dinner one night when we got the call.  We rushed over to the bike store where they showed me my choices.  One brown one and one pink one, each with a big paper price tag attached to the handlebar.  The Cadillac of all kids’ bikes – we knew a good prize when we saw one.  Many pictures of me cruising the driveway that evening on my new bike were taken – many of them showed my pouting sister on her Big Wheel in the background.  (I would have pouted too if I was forced to wait four years for almost everything to finally be mine.)
I still love to ride a bike – and love renting them on vacation.  I’d like a bike that reminds me of a vacation rental – it should have more than one speed, but not look like I’m supposed to be wearing spandex and winning races.  I love the retro looking cruiser bikes – and I must have a basket (or two or three).  Fenders are a must to keep those mud spots off my rear, and a bell would be an added bonus.  The one above was so beautiful it hurt, and since it was belt driven it glided around almost silently.  But the three gears didn’t quite help me get up the test hill and no matter how cool your bike looks, it never looks cool to have to get off and push.  I’ve got a few more beauties to try out around town, but I’d love to hear your recommendations if you have them.
…..
Other bike worthy notes:  E is riding on two wheels now.  And don’t blame her for just now mastering it.  Blame her parents for spending last summer way too pregnant or with a new infant to take off the trainers.  She might be late to the game, but we’re looking forward to cruising the parks together around here – me and her – very soon.  Next up – baby seat for Dad’s bike…