I am hurting my father with these posts.  First it was the g diapers.  I remember asking my (Procter and Gamble employed) father when I was still pregnant if he would be too horribly crushed if we drastically reduced our Pampers consumption in the house.  (He wasn’t.)  And I will say that when all the cloth diapers are in the wash, the baby does wear a Pamper or two.  Before we ever ventured into the cloth diaper world – back in the old days when E was in diapers – we tried a bunch of different brands, including the generics.  Who wouldn’t once they encountered the sticker shock of those tiny little newborn diapers that they wear for all of twenty minutes before letting loose another runny poo?  Unfortunately those cheaper diapers never worked.  They always leaked, and leaking diapers were never worth the extra change, no matter how much it jingled in our pockets.  Never.  Pulling poopy onesies over the head of the baby resulted in multiple baths a day which drastically cut down on the amount of free time we had for other activities like crossword puzzle working and light reading.  Ha.  But they did stink, and we were Pampers consumers through and through.
Over the course of six years, Huggies (cheaper by pennies only) has made some pretty big strides, and still to this day remain the only overnight diaper F can wear without soaking through.  She sleeps on her stomach with her rear so high in the air that short of strapping some sort of super absorbent inner tube around her mid-section, it takes a really good diaper to catch the liquid before it puddles under her stomach.  I still feel like I’m letting my father down a bit.
But perhaps the mightier blow is in the works right now.  I’ve been pretty brand loyal to that orange box or jug since I first started putting coins in machines to do my own laundry.  (Cover your eyes, Dad, I have a new love.) 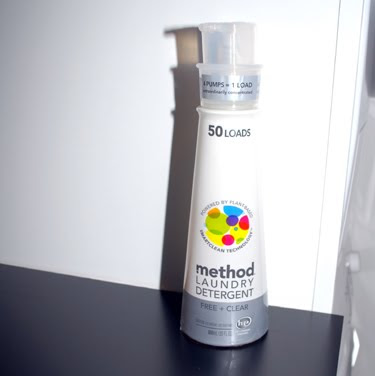 It’s not just because the bottle looks so much better in my newly renovated laundry room (it does) or because it takes up so much less room (it does) or even because it easier to use than that giant orange bottle (oh my goodness, so much easier) or because I can use it with one hand while holding the baby in the other (I can!  I can!  I can!).  You could say it’s because it’s supposedly greener and leaner and meaner than Tide and the company is cool and leaves me coupons in my inbox and doesn’t give me a hernia when I carry more than one bottle in a bag draped over one arm from my street-parked car (all those things and more!).
It really comes down to the ads.  I love them, and they work on me, and I’m not ashamed to admit it.  They work.  Nice job.  I’ve switched, and I think I’m in love.  I’m only twenty or thirty loads in, and there’s a pretty big gelato stain (chocolate) on some little first grader’s skirt, so I won’t jump into anything too permanent until I’ve used it for awhile.  But there is a second bottle already purchased and waiting, so we might just be free and clear of those orange jugs for good.
My father is no longer an employee of P&G, but he does enjoy a bit of retirement stuff from them.  And we own a lot of stock in that company (well, my children do) so feel free to continue using your Pampers and Tide all you want.  Really, they are just fine. 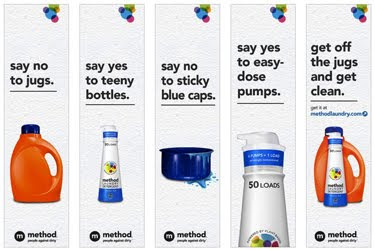