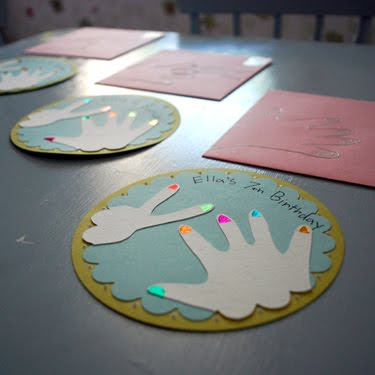 After seven years, it’s funny to think of a party in terms of just three kids instead of a dozen.  We’ve had simple / elaborate birthdays (yes, you can have both at once) for all the previous milestones, and just had another one for the baby a few weeks back.  The seven year old requested a smaller party this year – perhaps just as a tool for trying to persuade us to let her have a sleepover – but even when that idea was tossed, she seemed content to party plan on a smaller scale.  I can count on one hand the number of times she’s had her nails polished (all puns intended), but that’s what she asked for this year:  a nail polish party.  So we’re having a pretend sleepover, a great idea we got from her buddy K, where the girls come over for the evening, get into pj’s late in the game, but get whisked away to their own beds before the moon is too high in the sky (and the homesick blues rush in).  There will be elaborate nail art – think face painting on a very teeny-tiny scale – and some other teeny-tiny art projects.  And one cool cake designed by the birthday girl.  Last night we sat down to make the invitations with her own seven fingers.  What a crazy easy task when you don’t have to make thirty of them (or one hundred of them at Christmas time!)  I seriously don’t know what it’s like to sit down and start-to-finish something.  Weird.  Cool.  Kind of nice.
So here they are – seven fingers for seven years in less than two weeks.  I may be ready for the party, just not quite ready for that number.