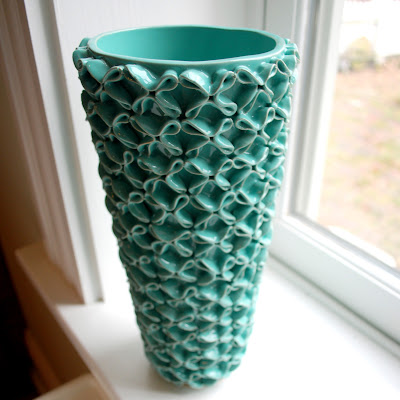 This makes around the twentieth week that I’ve had a Friday feature called friday finds, and while sometimes it does feature something that we’ve discovered and purchased, or a gift for someone that we want to share, more often than not it’s about something we’ve found on our own – without cost – like rediscovering our Christmas ornaments again each year, or the joy of finding our feet for the first time.
This is also the part where I disclose that I am not in the practice of employing what some term “retail therapy” as a way to cope with the stress of the day or the grayness of the weather.  I’m not knocking that kind of therapy – practiced in moderation it’s a lot less destructive than other forms of “therapy”, and I am very close to some people who would confess that they sometimes practice it.  Heck, I’m often the recipient, so I say – forge ahead if it makes you feel better!
That being said, I’d have to classify this morning as one part errand running / two parts retail therapy.  After dropping the older one off at school, F and I made our way to a new(to us) coffee shop in our neighborhood.  I ordered a cappuccino and we found a corner couch to sit on while it was being made.  The corner we chose had bookshelves with an eclectic assortment of used books for sale, the low coffee table in front of us was a rectangular version of the round walnut one that we currently have from my grandparents.  On the table sat an old manual typewriter (similar also to one my grandparents gave us) that F tap, tap, tapped at, and then my white china cup of perfection arrived and I spooned foamed milk into her mouth and leaned back into the cushion to breathe.  For the next hour I did nothing but that.  She moved from the typewriter to the bookshelf, taking one book off at a time, removing the cover and flipping through the pages before returning the volume to its sleeve and selecting another.  Eudora Welty, Robert Louis Stevenson, Moosewood Collective, Howard Stern…  the titles stacked up on the table, the drink was finished, and still I sat.  I knew that was the feeling that I was going for in the living room makeover to a library.  I find peace in a place surrounded by books, I find beauty in those objects that create them.  I crave a space for the volumes to live and a few extra spots for things like our typewriter to rest upon, a place where the simple act of selecting books and stacking them tall brings such peace to this tired mama bird.
We left the coffee shop about the time the furniture stores opened, and we called this day our “sit upon” day.  We tried out sofas, borrowed swatches, and thought a little about the furniture we’d most like to curl up on and read a good book together.  Well, at least I thought about that.  She mostly thought about how fun it was to climb up and down on them all.  I’ve found that when you seem really serious about the imminent purchase of a large piece of furniture the salespeople no longer frown upon a toddler trying out each one for size.
In the process we found three things that spoke to me – perhaps because they seemed almost plucked from that mood board I created a few weeks back.  One was a vase in such a beautiful color (my favorite) that I admit I would have paid more for it than what they were asking. 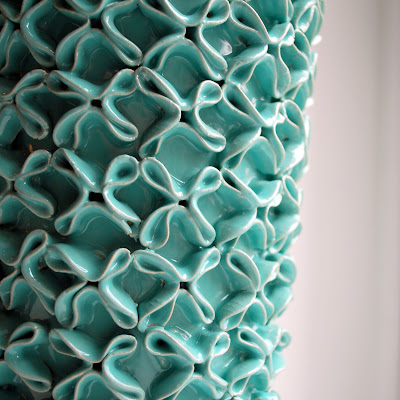 The second were two little birds on a tiny little clearance stand that looked like they needed a good home, perched upon a stack of the aforementioned books. 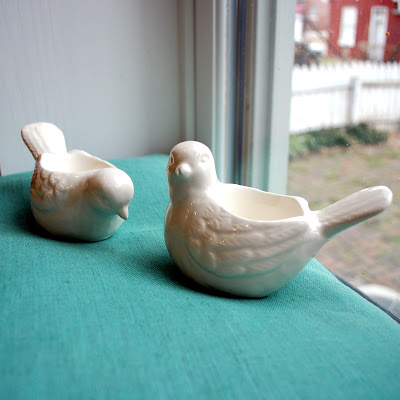 The third was a pillow – for the living room of course, but it might just sit on the bed for awhile getting broken in with my current thousand page read. 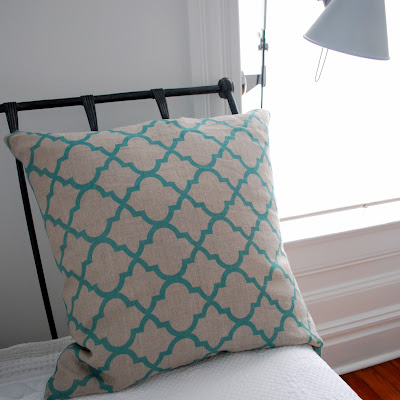 I suppose the outside stresses are all still there, and I know that a pillow or a china bird won’t take away that pain.  But sinking into that corner couch watching that toddler so busy at play with a white foam moustache, dreaming of living rooms that celebrate “living” – well, that (and a good shot of espresso and aqua) will certainly help soothe the soul.
…..
(Part three to follow with couch contenders – and possibly a vote!)