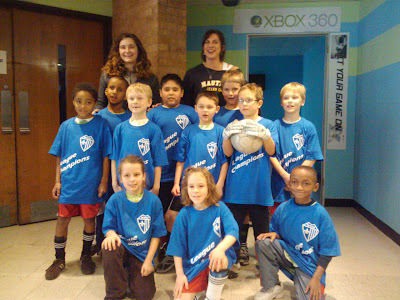 This weekend did mark the final game for this indoor soccer team, and they ended up with a nearly perfect record and were named the league champs.  It was a really exciting season – the game is played off the walls so it ends up looking like a cross between racquetball and soccer – fast-paced and high scoring.  And even though the league is co-ed, our team was the only one that actually had girls on it.  Not to mention those super duper female coaches.  And super duper championship shirts.