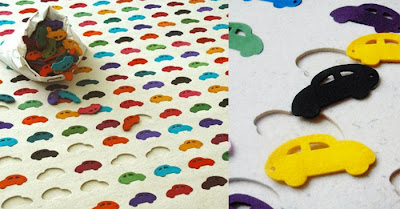 Oh my dear goodness, I just about fainted when I saw this car rug the other day featured on Bloesem Kids.  Do you remember the absolute obsession that E had for lining up matchbox cars by color, by type, but mostly by intricately designed parking lot layout?  F’s demonstrating a bit of that obsession – on Friday she spent about an hour lining cars up on a row, and then she admonished me for putting the “wrong” cars back into the “wrong” bin – apparently now they are sorted in a different way.
This rug is huge – and I can only imagine how lovely it would be to walk barefoot across the felted surface.  And my kids would think they had died on gone to heaven with the options for organization in front of them.  I saved the photo, went to bed and then all of a sudden it occured to me – how the heck do you vacuum the thing?  You know it’s a lint catcher, and every rug needs vacuuming.  These suckers would get sucked up in a flash.  And as fun as taking them out and putting them back in might be – can you imagine the amount of time that would add to that kind of chore?
But still…it’s so awesome.  Maybe just a roll over lint remover might work… no suction required.