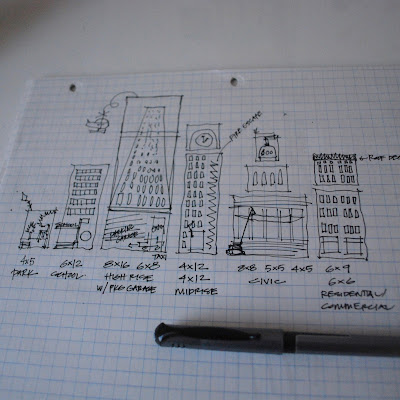 Last night, while E was working on a little homework, the three of us (while F sang in her bed down the hall) did a little brainstorming on the city.  A few sheets of sketches later and this is what we came up with.  I really liked E’s idea to put the small canvas on the bottom of the skyscraper after we determined that we’d get a parking garage in there, and I liked M’s idea to force the perspective on the tall building to make it look even taller.  I like the addition of the roof garden, and I’m excited about that school and park.  And we might even get a helicopter hovering in the mix. 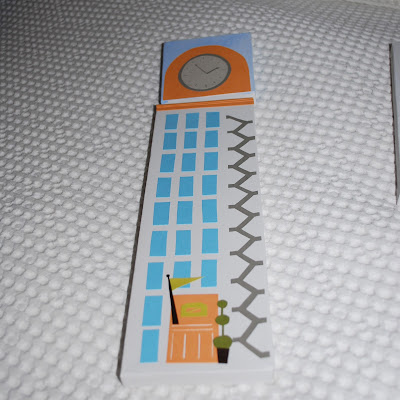 I worked on the second building for my nephew’s “city” and realized when it was finished that I liked the simplicity of it a little more, so I peeled off the facade of the first building and reapplied it with simpler details.  The clock portion is a separate canvas so it will hang just above the bottom one.  I love the fire escape.  E and I spent awhile with test trips figuring out how to convey a simple version of one.  The one rule I’ve set for myself on this project is no straightedge / no ruler.  So everything is done by eye and has a slight wiggle to it – which made the fire escape that much more fun. 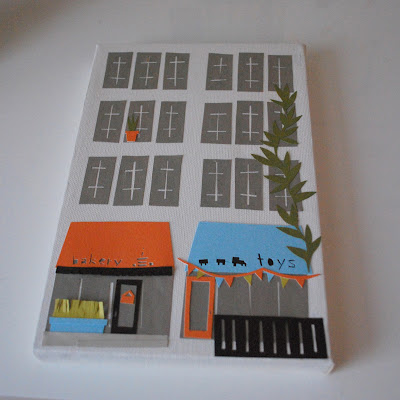 Here’s the new building with no graph paper background, simpler vines on the side and no added horizontal details across.  Slowly but surely, a city is appearing.