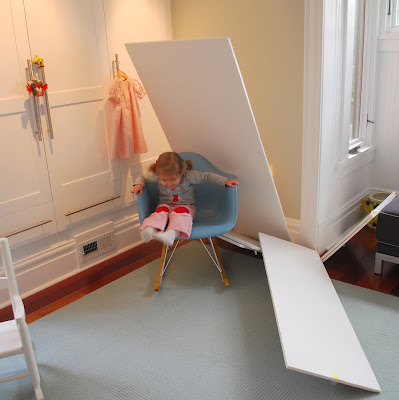 As you can see here – we had a bit of an annoyance in F’s room related to daylight control.  Meaning, we had none of it.
Her room has seven windows – two East facing, four South facing, and one West facing.  And she’s perched up high on the third floor above the treetops, so her room gets a lot of sun.  There was a fairly easy fix for her big double hung window – wood blinds to match the rest of the third floor windows.  But we waited on that window until we determined what to do with the other six.  And then once we decided, we just never got around to it.
The six windows in the box bay posed several different challenges – three are operable and have hardware, three aren’t.  Four are small and square and have several layers of trim around them that took way too much time and planning to install to even consider covering up with blinds or shades… and they were too small to install blinds or shades on the inside.  Awhile back I decided that a single track system that wrapped the three sides of the bay would be best.  It could mount to the ceiling and hold lined curtains that could be drawn for light control at nap and bedtime, but could also be moved in either direction, or completely pulled out of the way to open up the windows to the sky beyond.
I found some fabric I liked, and the type of hardware I’d need, and the name of someone highly qualified to tackle the job.  And then I got sticker shock.  Like several K sticker shock.  The hardware alone – while white and custom made (seamless) and operationally flawless – was a nice chunk of that cost.  And the fabric required to cover the three walls, fully lined, was expensive as well.  The project got put on hold and I purchased $60 worth of foamcore and spent an hour or two cutting it to shape.  We’ve used it ever since.  But when we take it down in the morning and let the sunlight pour in, those pieces always seem to get in the way.  I moved them one too many times this week, I think, and so the alternative hardware (from IKEA, purchased a year and half ago) needed to be installed.  And so it is. 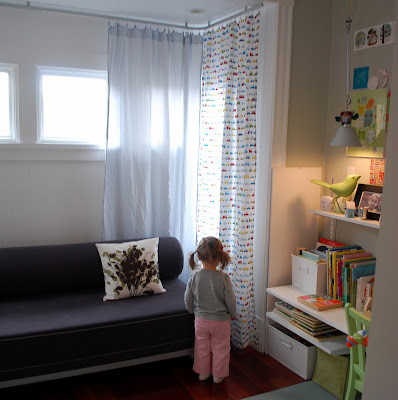 The system is IKEA’s Kvartal, and like most things IKEA, it’s inexpensive, has lots of parts, and little instructions.  It took awhile to lay it out, hold it up and figure out the clearances we’d need, do the calculations, redo the calculations that I did the first time (incorrectly), and then unwrap the ten thousand pieces, each labeled with identifying stickers that were next to impossible to remove.  That’s the price you pay for the price – $5.99 a piece – 4 required, plus a few ceiling mounted brackets and three hanging kits.  I doubt we spent more than $50.  It’s been so long ago, I don’t remember.
We laid it out on Saturday, and then M cut it to fit and installed it today. 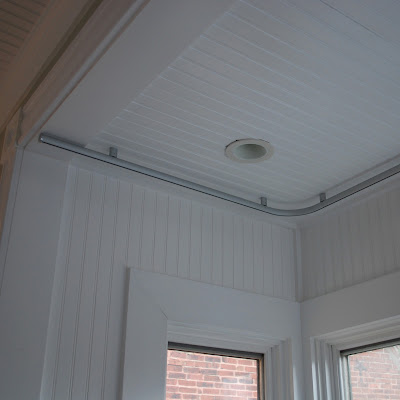 After it was installed, I took a few of E’s twin sheets and did some tests with the clips to start to get an idea of how much material I might need, how full I’d like it, and how close together the hardware should be. 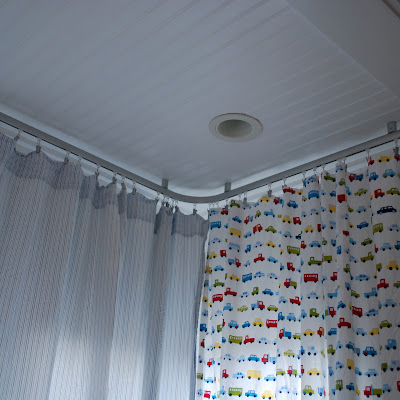 With the hanging clips holding the material, it looks a bit like a hospital curtain with the curved corners.  But what I do like about this system is that you have three choices for curtain assembly.  The best looking, in my opinion, are the concealed drapery hooks. 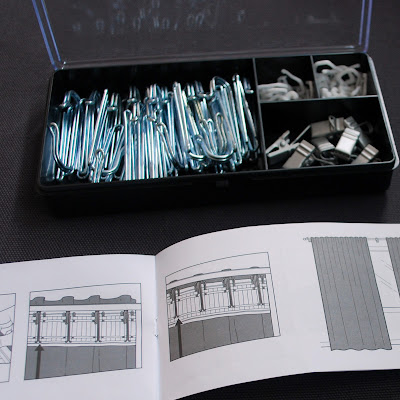 These will attach to a panel at the top of each curtain panel so when the curtain is installed the top portion of the fabric will nearly reach the ceiling, and hide not only the plastic slides, but also the metal hardware itself.  It’s a pretty custom look for a pretty reasonable price.  And if down the road we’re not happy with it, maybe we’ll splurge and buy that other track.  But I doubt it.  It’s nice to save the money here, because I’m certainly going to need it for all that fabric. 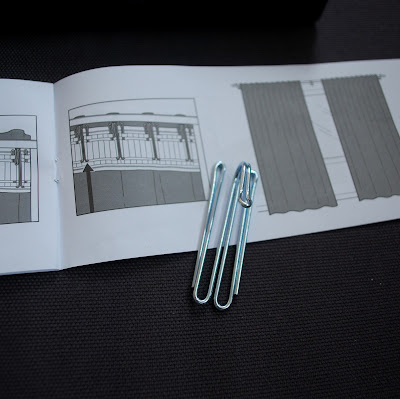 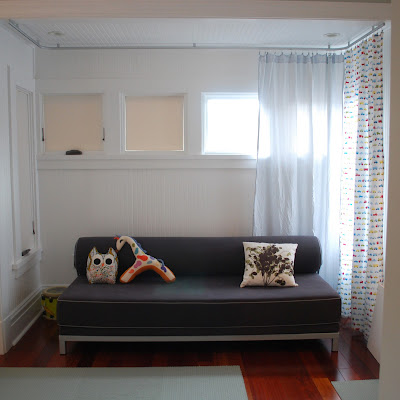 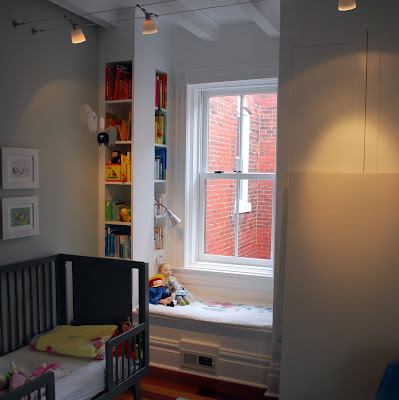 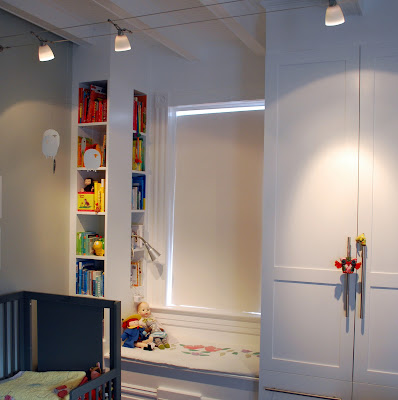 This window is measured, and maybe I can talk M and E into running out this afternoon to order those blinds.  It may be awhile before we can actually do the curtains, but minus one piece of foam core is progress enough for me this weekend.
Here are fabric samples I’m contemplating – if I had more time I’d link them all, but I’ll have to do that later.  I may have an extra hour today, but that extra hour is already filled with things to do! 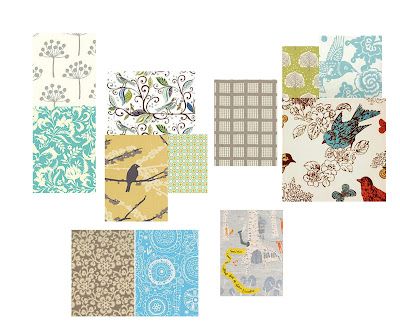