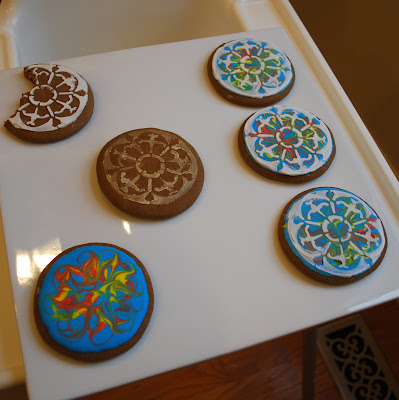 I got this wild hair to make these cookies.  Saturday night.  Around eight.  PM.  Let me back up a bit. 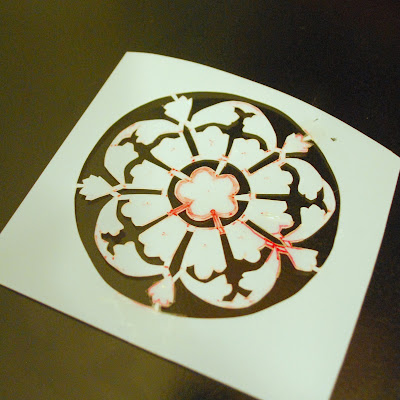 I actually knew that I was going to make cookies at some point over the weekend to go into college student finals care packages from our church – forty of them.  I had a very busy Friday and didn’t get to the grocery store that day.  It’s been a working weekend, and we’re still working.  (I just had to take a moments break from the laptop and look at cookie pictures for a moment.)  So I found myself on Saturday night going to Hobby Lobby (for blank stencils) and then the grocery store for fresh ginger around dinner time, in the rain, with both girls so that M could get a bit of work time in before the evening stretch.  Note to self:  No Hobby Lobby in the month of December.  Ever.  Again.  Actually, I’ll extend that to all retail locations.  Which is fine by me (minus the occasional toothpaste or shampoo run) because I’m done – with the presents at least.  Hooray!  Done.  And by the second of December.  All those Friday finds have paid off. 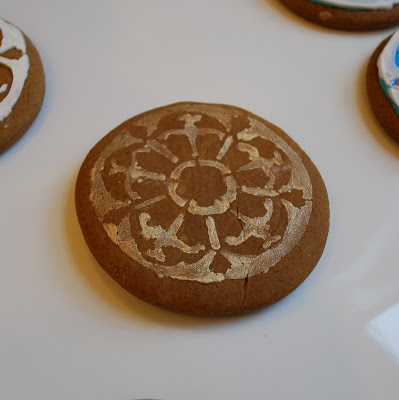 F was having none of the fresh ginger shopping, and climbed out of the grocery cart no fewer than eleven times between the produce section and the checkout.  I held my reusable grocery bags in my hand while the bagger put my groceries in plastic.  It wasn’t until he asked if I wanted my milk in a bag when I noticed that I hadn’t handed my own bags over.  We pushed our cart and ourselves out the door, into the pitch black parking lot, past the Salvation Army bell ringer – angering the little one because she didn’t get to put money in the slot on the way out like she did on the way in – into the beginning of a cold rain, and the kind of toddler car sobbing that can really make your hair stand on end. 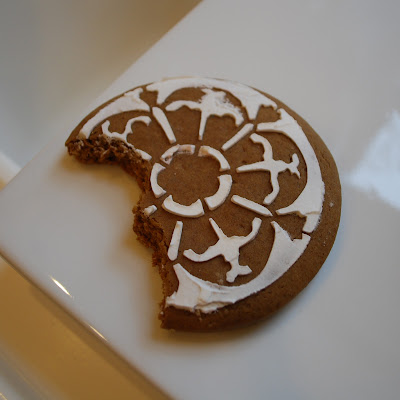 I made two batches of the best gingerbread recipe ever, and stacked the parchment lined sheets on top of each other.  Then I busied myself with other tasks while the dough chilled for a few hours.  Just before ten I rolled the dough out in a bed of flour, cut fifty or so large circles, and transferred them to sheets. I rotated cold sheets in, hot ones out every ten minutes, and the house filled with the scent of warm spices. 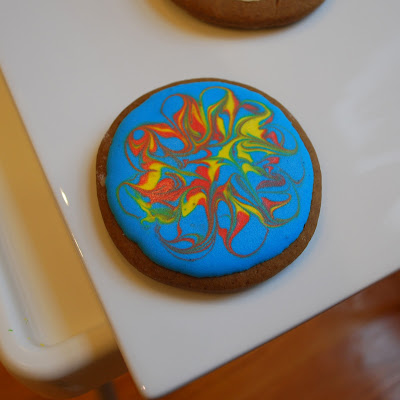 Around eleven or so the first few trays were cooled enough.  I took the stencil of one of the rose windows in our church’s sanctuary that I had made while the dough sat chilling, and tried brushing gold luster dust over the surface.  The end result was pretty cool, but I still liked the idea of using a little icing, and I was concerned that the gold dust might rub off and just end up looking like a giant blob of sparkle.  I tried white icing over the stencil, which was pretty cool as well, and certainly stood out more than the gold.  But by now it was approaching midnight, and all my good reason had long since turned in for the night.  What about the stained glass?  I knew I could do it – so blue icing was made, with a little red and yellow swirled in for effect.  A few hours later the base of the cookies were complete and we turned in (finally) for the night.
This morning I woke up and tried plan A – brushing gold luster dust over the swirled stained glass icing.  It didn’t work – or at least it didn’t look very good.  So I made a second batch of icing – white (again), and applied the window frame to the cookie.  They aren’t perfect, but they look pretty cool, and despite a few drying issues which were quickly resolved with the right amount of time – the kind of time you should have when you properly plan ahead for cookie making – they were done.  They are wrapped and ready for tomorrow, and I’ll likely make a few more.  Now that it’s all said and done, I really like that gold one.  Simple, elegant, and the first idea before the sugar went to my head. 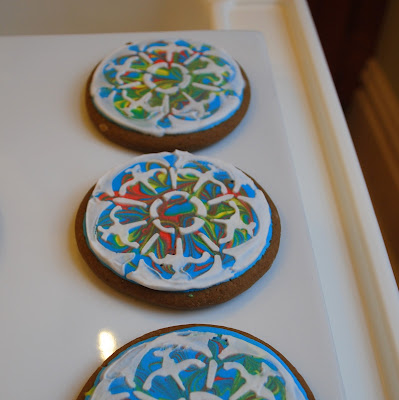 Now, back to work. 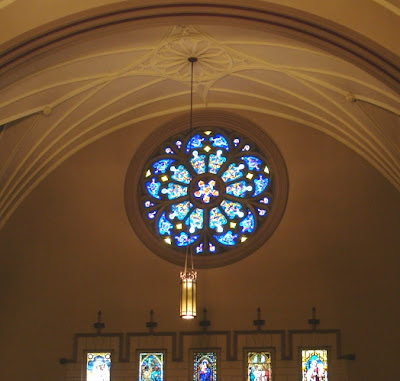