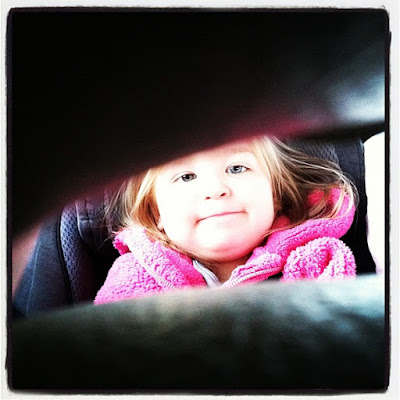 This child is most certainly not quiet in the car.
We’ve entered the age where car travel is a little bit draining.  When the girls were little they could be counted on to sleep if the car was in motion.  Now that the little one is a little bigger she’s likely awake (save for a nap or two), and she’s also very likely being loud.  I know that we’re not too far from a time when she can see better out the window, when she can read to herself, when her body doesn’t ache from lack of movement for a few hours at a time.  It’s tough to be two and be pinned to a seat with a five point harness for hours on end.  So she moves her vocal chords.
The other thing she’s started doing is cheesing for the camera so I have to be pretty subtle about it when I’m taking photographs.  It’s easy to be subtle when she’s playing and her mind is occupied with other things.  It’s not as easy when she’s stuck in the car and I turn around to take her picture.  I thought I’d try a photo through the tiny gap between my seat and my headrest.  She couldn’t see the phone, and although it looks like she looking right at me, she’s really not.  A secret camera perfectly catching one of her signature looks.  (And a rare glimpse of a quiet child.)