I have two resolutions for this year, and they both kind of tie into this blog.  Well, at least one of them does, but I plan on reporting on the other one as well just to keep me on track.  Sometimes I just need a little outside pressure – even self-inflicted pressure.  This post is about the first one.

When I finally got back into photo sorting and printing for the two grandmother’s albums that I do of the girls, I realized two things.  First, it was really, really satisfying sitting down to a task that was long overdue and getting it done.  And second, I have about a billion of those tasks that float around in my head at all times, and I think I underestimate how much the “not doing them” really bugs me.  It’s not really a matter of trying to do it all.  I think it is more of that elusive goal of balance that I’m always struggling with.  Last year was a taker.  The year took a lot out of me.  I felt bogged down in obligations and things that I had to do.  And because there was just so much on our plates, when I did find myself doing the things that I love I found myself fighting that persistent little bugger called “guilt”.  I fight that guilty urge a lot.  I discovered long ago that giving into it makes me miserable along with everyone else.  But it still hovers around like a gnat, a small nuisance that can ruin a perfectly good picnic.
For a few months now I’ve been writing down items that I’d like to tackle – in the house, in my life, and this year I’m going to hit that list hard.  Some are small things, some are bigger.  Some are very tiny, but persistent like that gnat.  Like the fact that we try to hang two dozen coats on three tiny hooks attached to a wooden plaque that I got from Pottery Barn a decade and a half ago when I moved into my first solo apartment.  Every morning from early fall to late spring I take coats and jackets off the hooks, searching for just the right outerwear for me and for two kids.  We rehang those coats multiple times a day.  It’s ugly.  It’s non-functional.  It doesn’t work, and it complicates a process (getting out the door) that’s already complicated as it is.  I’m going to squash that coat hook gnat this year.  I’m not sure how, but I’ll let you know the process I go through, the inspiration for a particular solution, the how-to’s, the materials, the cost and the results.

Once a week.  That’s my challenge, to myself, to my closets, to the art projects in my head, to my pile of winter coats.  The projects themselves might take twenty minutes or several weeks, but the goal is to plan to knock one thing off the list each week, and keep a record of what I’ve done.  I’m hoping by the time December rolls around I’m feeling a little less beat down by the year, and a little more energized by what I can do when I put my mind to it.

So here’s week one:  Photo Albums Updated.  Like I mentioned in my holiday message last month and earlier in this post, I’ve been working on this project for quite awhile.  I think I started sometime in September.  It took that long for several reasons.  First, I had two and a half years to cover, and I take a LOT of photos – photos almost every day.  Second, I was filling albums for four people (two that I did for gifts – which aren’t part of this challenge, and getting F started and E back on track – those do count). 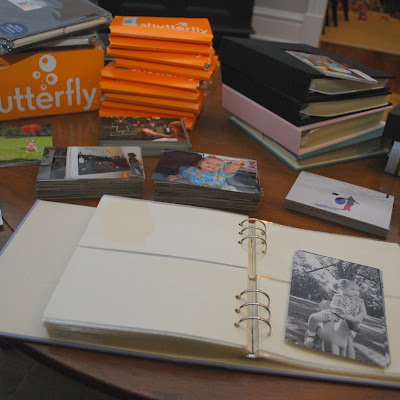 I have a pretty consistent method of transferring photos from the camera to my computer, and so the organization part was covered.  But it is still a little mind-numbing to go through each day and select those images that I wanted to print out for the books.  I aim for roughly 10-12 images a month for the grandmother’s albums, but I put a lot more into the girls’ albums.  I sorted, sized and saved over 2200 photos, uploaded them to Shutterfly, and ordered 4×6 prints.  I spread the orders out over a couple of months, and always bought the 600 print prepaid plans for the lowest cost ($54 each).  I watched for free shipping offers and used those as well, because ordering 600-1000 photos at a time costs about $40 to ship – it’s a heavy box. 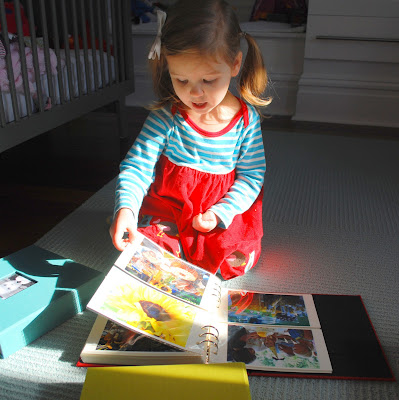 I also discovered a long time ago that it makes more sense in the long run to save the photos into individual albums for each recipient and have a file naming system with first initials rather than selecting a bunch of photos, uploading them, and then going through and choosing the quantities for each one.  That’s a little more time on the front end, but saves a load of time on the back end.   Each of the photos then come labeled with an initial, a month and a number, so that sorting the photos into stacks and then later into books in chronological order is much easier. 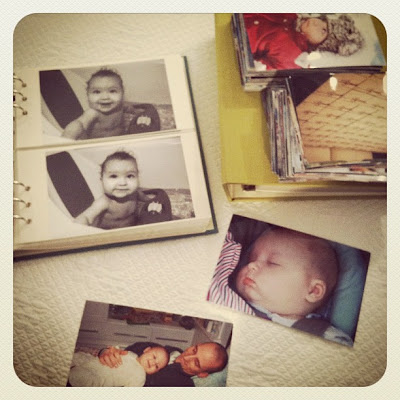 Because that many photos is, well… a lot of photos to sort.  (Below is just F’s stack after about a hundred were already in the album.) 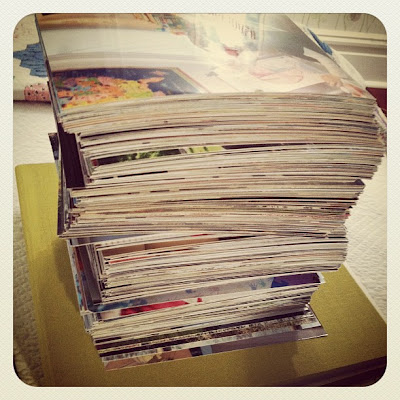 I talked in detail a long time ago about my album of choice.  I love Kolo‘s cloth covered albums, and the Catalina style is hands down my favorite.  It holds two hundred photos, and has a few blank sheets that I write the dates on.  They aren’t cheap – they are currently $38 each, but in my mind they are worth it, and for at least eight years, this model has always been available – although colors change.  I’d like to be able to stock up for everyone and not worry about them being discontinued, but that’s an expensive prospect.  I just keep my eyes on them in case I see them phasing them out.  Occasionally I’ll order them in bulk from Paper Source when they offer 20% orders of $100 or more, and I also purchase them here locally from ArtMart when I have a good coupon. 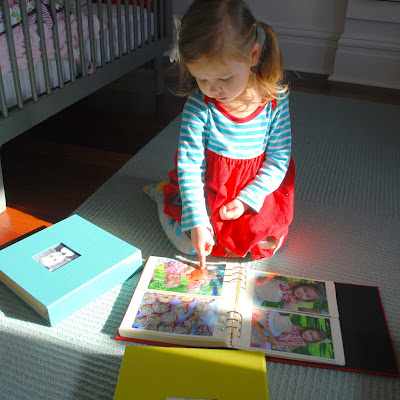 My favorite part is the small square opening in the front.  I find photos of the girls that I like, and that represent the age covered in the book.  It’s sort of a graphic representation of the order the books go in rather than writing “F, Birth – 6 months” or something like that. 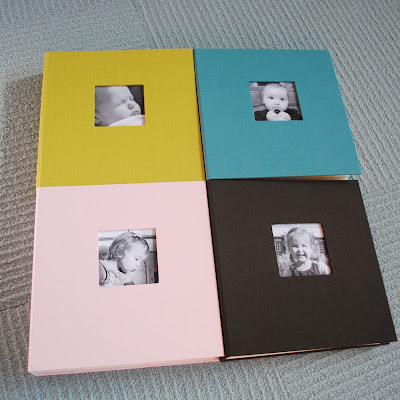 Picking the cover photo is one of my favorite parts. 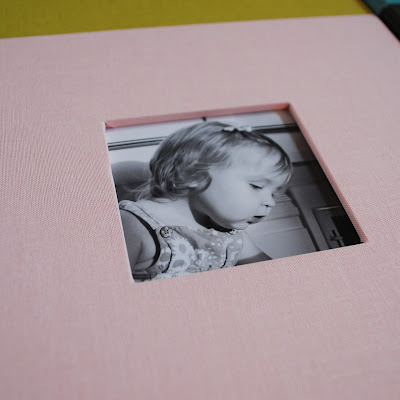 When E turned one she received a striped photo album from Hallmark that was the exact same size as these Kolo Albums.  I used it for her birthday party photos – the stripes are all the exact colors of the other solid colored albums, and she’s always enjoyed looking through an album that just tracks that special day of hers through the years.  I’ve hunted high and low for a similar type album for F to no avail, so for now she has a red one, and I’ve put a birthday party photo in the front to delineate it from the others.  The next time I place an order with Shutterfly I’ll get another copy of this photo – this one came out of our printer and so it looks a little blue. 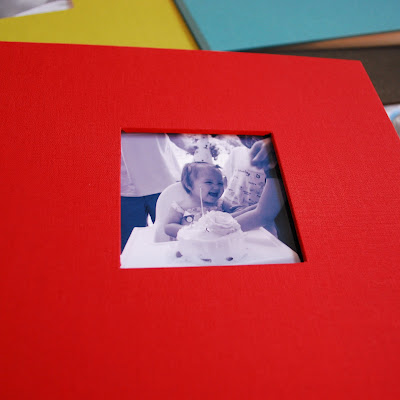 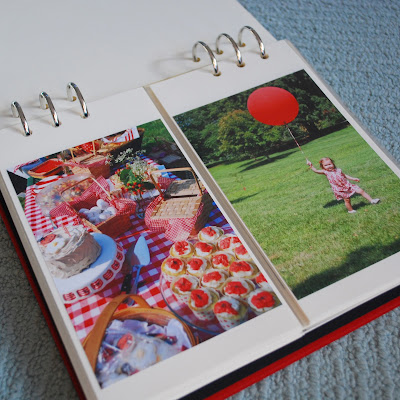 I’m torn on the cover photo for F’s first book.  I like the tiny sleeping photo of her, but that cheeky little monkey picture really captures who she was in those first couple of months.  Decisions, decisions. 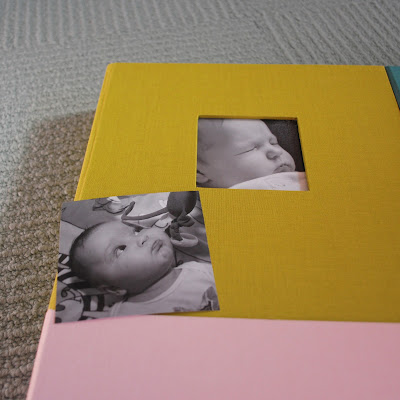 These are the photos I printed for E’s books – I usually choose a bunch, and then cut them out and choose them once I’ve filled the books. 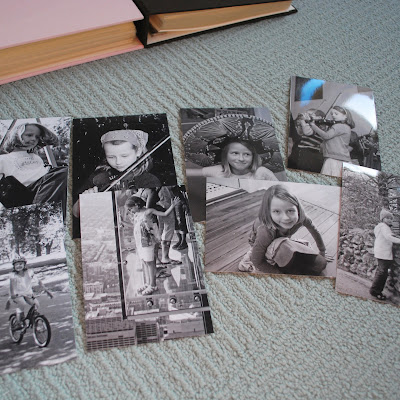 This afternoon I gave F her books.  We looked at them on the floor of her room for over an hour.  Just like her big sister (her albums have been updated as well!), she’s fascinated with photos of herself doing things that she doesn’t remember or that she can’t imagine (like being born).  And I love watching her look through those photos, giggling at familiar faces, asking me hard questions about loved ones who are no longer with us, remembering little moments with friends and family. 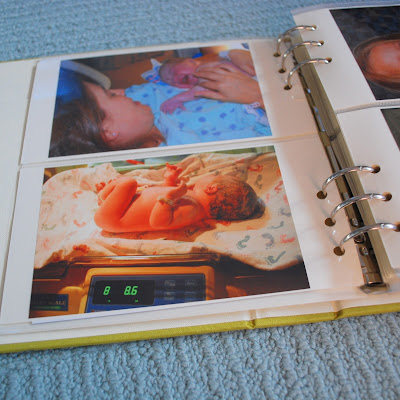 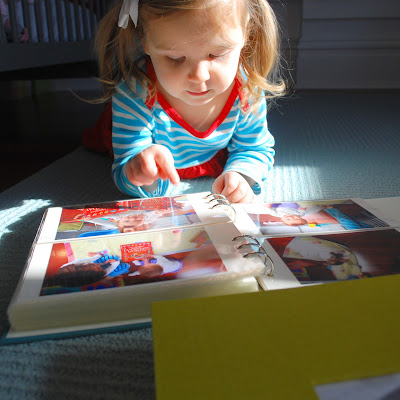 52 projects, week one:  Success.  I mean, look at that face.  Inspiration enough, isn’t it?
P.S.  I have a little New Year’s Resolution for you – speak up more!  You guys keep me going.  I’d love to here what you are tackling this new year, or what you think of what we’ve got going on.  Hope your year is off to a good start.