Two weeks in.  Maybe this is more promising than I first thought.  Like more promising than my self-renewing resolution to stop biting my nails every year that I break about ten minutes after midnight on January 1st.  (I know, I know – it’s a disgusting habit.  And an impossible one to conquer – at least for me.)

Week two – artwork scanned, printed and framed.  And like last week’s project, this is the continuation of a project started long ago but not touched in quite awhile.  I started taking some of E’s artwork and, after scanning and resizing and printing out on glossy photo paper, I displayed it in this nifty little frame that calls my dresser home.  I’ve even had thoughts about where this thing might hang more permanently, but it’s never moved from its initial resting place.  It has also had some blank spots for quite awhile, and a serious lack of work by the younger child in the family.  That’s actually a common theme throughout the house (photos, artwork, etc.).  Not enough representation for the wee one.

I’m working on it.

Here’s the frame as it looked earlier this week with thirteen blank spaces. 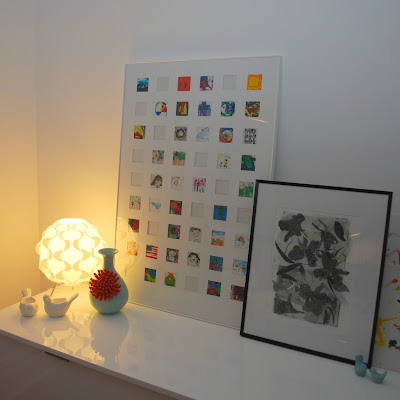 Here’s the paper I’ve been using.  It’s shiny, but not super shiny.  Hence the “soft gloss” name I guess. 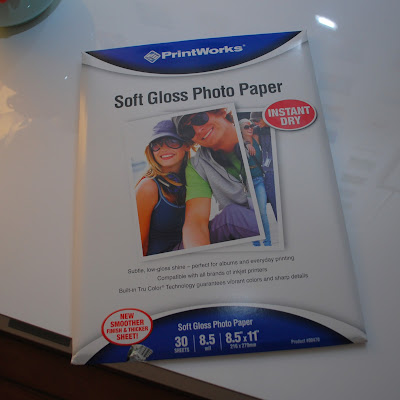 I’ve had a stack of artwork that I’ve been setting aside for awhile.  F’s more of a play dough and puzzle kind of girl – she’s certainly not as prolific with the artwork as E was (and is), but I still have several that I really like.  The ubiquitous handprints, of course, but also the series of drawings she did when she finally mastered a circle.  I remember the afternoon we were drawing when she kept trying to make one end meet the other end, and how excited she was when it happened.
I also have a few other pieces that E did a few years ago, and so I scanned the lot of them a few nights ago. 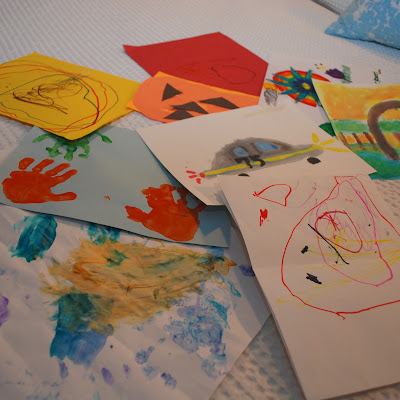 I have a template set up in Photoshop, so the layout went pretty quickly.  I printed out a test sheet and then the real deal at the highest quality print settings available. 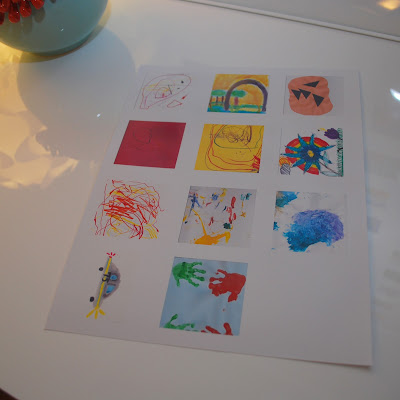 This afternoon I cut them out… 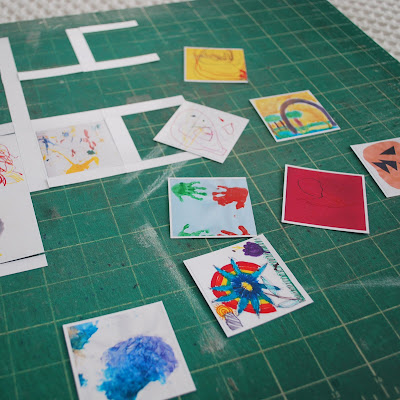 …opened up the frame… 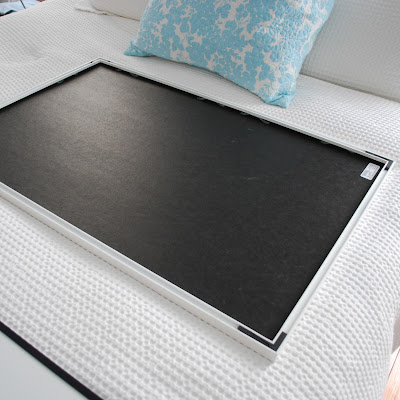 …laid them out where I wanted them and affixed them to the back of the mat board with tape. 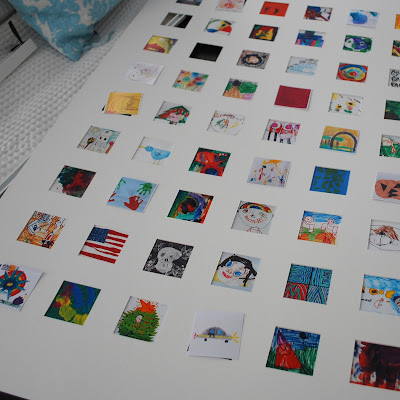 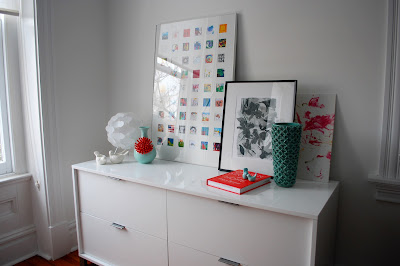 With a little better planning I would have filled all thirteen spaces this time, but I’m hoping that as the girls get older I’ll continue to add pieces in, and swap some old one out for new ones.  Those blank spots will keep me motivated.  (And might encourage me to get out the paints and mess a bit more often.) 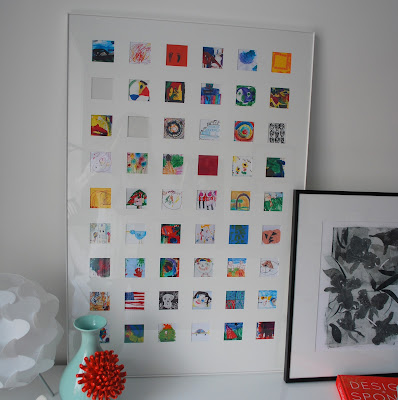 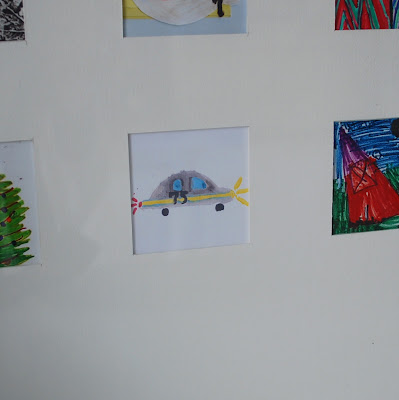 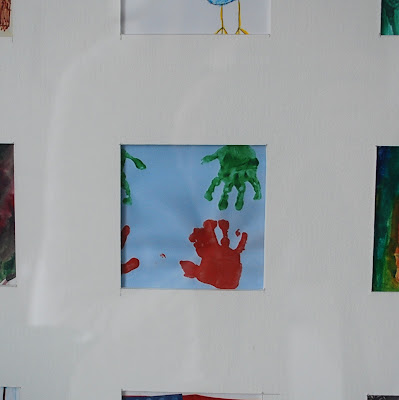 I like how the scan of the handprints actually shows the shadows on the paper that’s wrinkled with the addition of paint.  It looks like the real thing (only in miniature.) 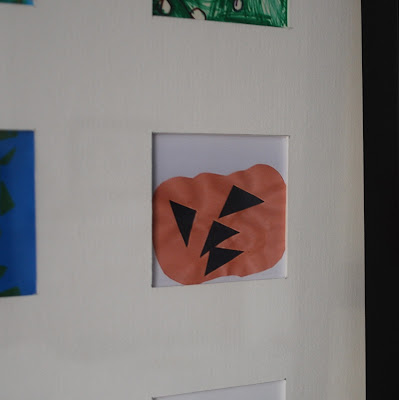 It feels good to get another thing off the list – and this project – while small – accomplishes a few things.  First, it gets the growing pile of artwork gathering dust under the computer desk out of the pile and on display.  And the real pieces are now filed in each girl’s art box in their wardrobes.  When those boxes get too full I’ll take them down, sort through and weed out, and even if some of these don’t make “the cut”, they are still here for me to remember and enjoy.  Second, it comes a tiny step closer to equality between the kids in this house.  Tiny, but still there.  Progress.
The initial cost of this project was probably in the neighborhood of $100-$150 if you count up the oversized frame, the archival mat board, the x-acto knife and blades (that I already had), the photo paper, the printer ink.  But for this round it cost $0 – just a couple of hours to scan, resize, print, cut, attach and reassemble the frame.  Even the little projects are easy to sweep under the rug, so it feels pretty darn good to get this one off the list.
And here’s a photo my sister sent me yesterday of my niece’s flower arrangement.  I want that one in my frame.  Is it wrong to hire out work for your kids’ artwork displays?  (Awesome flowers AP.) 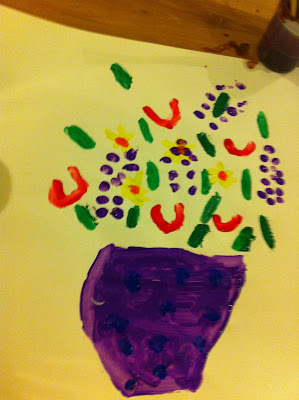