Do you remember Y2K?  Do you remember all the hysteria around the “end of the world”?  The world’s computers would crash and the planet, perhaps even the universe, would explode at that moment?  The only explosions I remember were the amazing fireworks displays across the world, one timezone after another.  And lucky for us all, the end didn’t come – which is a good thing, because I was in Ft. Wayne, Indiana, and I didn’t really want to spend my last moments there.
What I remember most about that New Years Eve was receiving these earrings from M (who was still my boyfriend at the time). 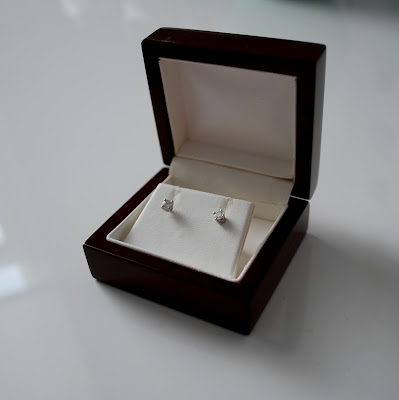 And I don’t need to tell you that when you receive a box like this from your boyfriend on such a momentous occasion like the precipice of the apocalypse, you might just think it contains another piece of jewelry.  That piece of jewelry came a few weeks later, and proved not to be the end of the world either.  We’re still around and ticking together twelve years later.
And what does this have to do with 52 projects you ask?
Well, I didn’t take those earrings off for over a decade until one of the backs was lost awhile back.  And it’s been one of those tiny to-do’s that never got done because it required a trip to the jewelry store (that I don’t frequent) with the earring in hand (which I never carried around with me).  It felt so good to get this little sparkle back (although it didn’t feel too good to put them back into my ears after the hiatus).  And while I was there I had the diamonds checked in my anniversary band and one was very loose, so I sent it off for repair as well.  No sense backtracking on the diamond years, right?
So even though I was so incredibly busy this week, I still got to mark another thing off my list, and I have the earlobes to prove it.