Hooray!  I’m five weeks in, and feeling pretty good that I’ve managed to scratch off five things from that list that hangs over my head all the time.  It feels good to make a little time to get some of those things done – and it really feels good knowing that I’ve tackled even more than five of those projects.  Some of them take more than just a week to get finished – they may involve ordering or some other kind of waiting period, so I’ve gotten the bulk of several projects underway or completed.  I’m temporarily coasting, although this feeling won’t last forever.  But for now it’s pretty nice (and my laundry is done – for today at least.)

This week’s project is updating the photo wall in the second floor stair hall. 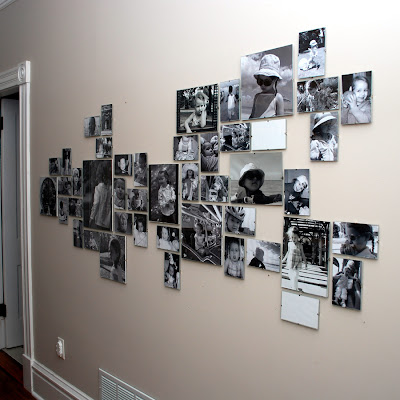 I started this wall many years ago, long before F came into the picture.  These were very inexpensive clip frames from IKEA, and I hung them randomly on the wall and slowly filled them with black and white photos.  The unfilled frames have plain white paper in them.  There were a couple of things that I liked about this wall – I liked how easy and inexpensive it was to get some photos up on the walls, and I liked how these were favorite moments of ours over the course of many years.  I should have kept updating them, and adding new photos when F was born, but like the rest of my ongoing photo projects – I just didn’t keep it up. 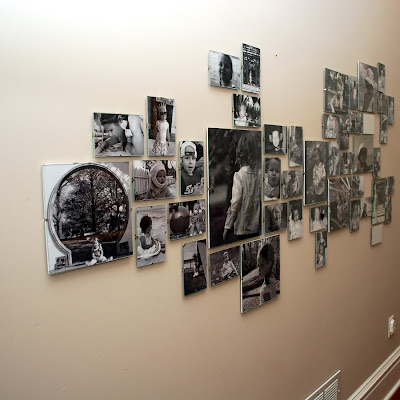 There were also a couple of things that I didn’t like about this display.  First – we don’t have an IKEA nearby, so I wasn’t very good about getting new frames to add to the wall.  And second, the glare on the glass is pretty intense as you walk down the hallway in either direction – in fact, it’s pretty hard to get a photo taken where you can see the photos and not just the reflection in the glass.  I know hallways and staircases are popular places to hang collections of photos, but it is hard to step back and really see what’s on the wall when you are viewing them at that sharp angle.  We’re getting close to painting this hallway again – right now it’s the taupe color that we’re getting rid of in the house, plus the hallway walls are pretty banged up from years of house projects.  I thought about just taking these photos down for awhile until I could tackle something similar again only with both kids this time.
Then I had another idea. 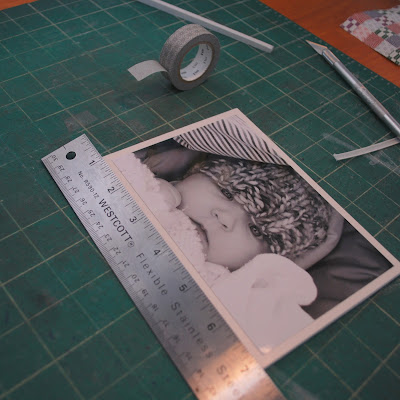 I had some foamcore scraps that I had given to E that were still hanging out in her wardrobes waiting for a project.    I spray mounted a 4×6 photo to some and cut the foamcore about 3/16″ wider on each side.  I then wrapped the edges in a silver patterned Japanese washi tape that I got in a pack of two from The Container Store. 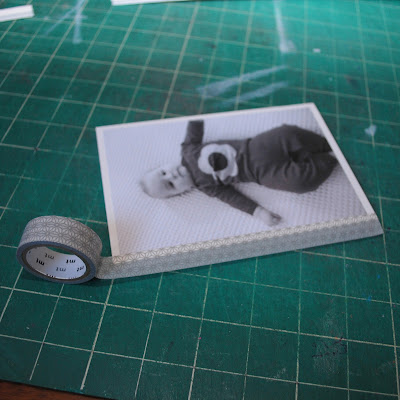 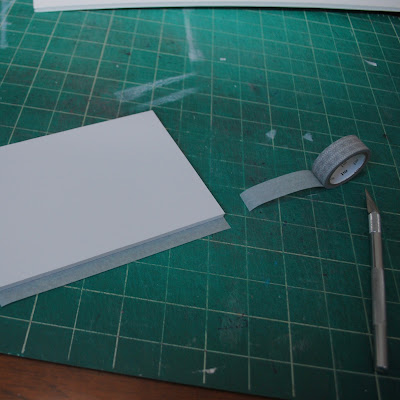 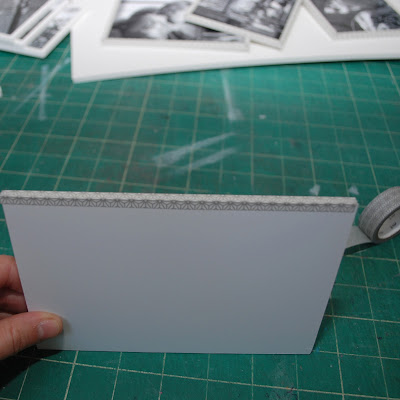 I did this to a handful of photos that I already had on hand – I had ordered them when I updated the photo albums earlier this year. 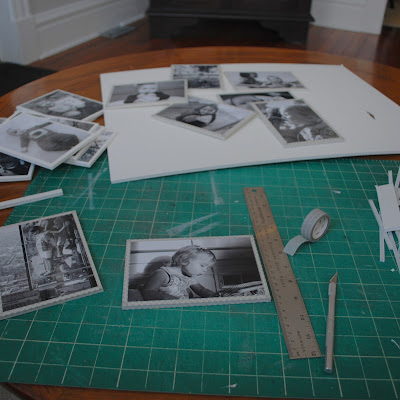 I’m not sure where their final resting place will be – perhaps back in the hallway on the second floor, or maybe somewhere else in the living room that’s in-progress.  I’ve also had my eye on a spot at the end of a hallway so you see them straight on.  Depending upon where they end up, I may mix in some of those larger sizes like I did upstairs.  And I’m thinking of ending up with a very square or rectangular outline vs. the jagged edges I have now.  Still working and thinking, but they are nice in the living room for the moment.  I hung them with museum putty, so they are very easy to mount and move around without leaving a mark. 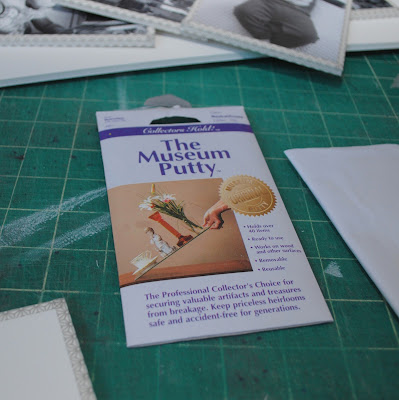 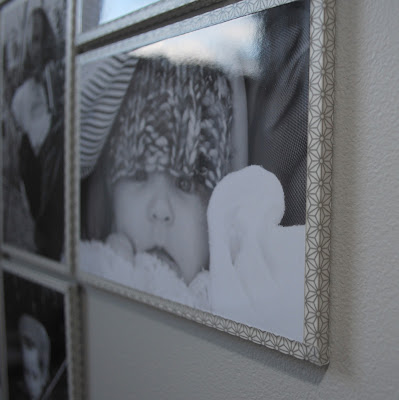 The silver tape gives an extra shine and just enough detail to the edges.  There’s nothing fussy about this at all, but the edges are just dressy enough to add some interest.  And they look great on the gray walls.  I started small… 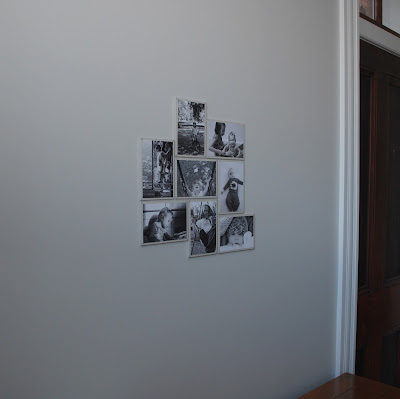 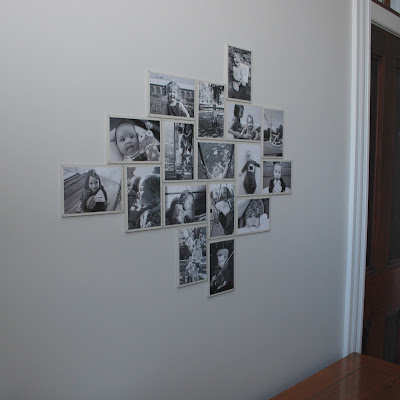 …working until I ran out of washi tape.  I’ll pick some more up to have on hand.  I think I’ll save the red to use on Christmas presents. 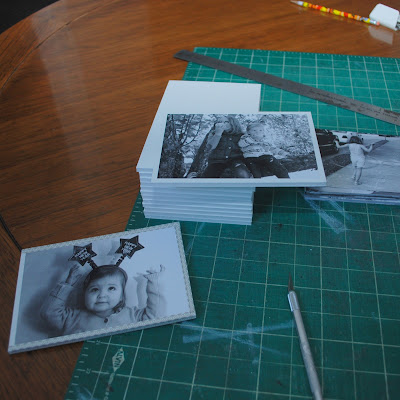 I pre-cut some more foamcore for future photos, and I’ll probably take some of E’s old photos from upstairs and mount them for this display downstairs.  I like the flexibility of this – in an afternoon you can get some photos up on the wall in a way that’s simple and fresh – and doesn’t take a lot of dough. 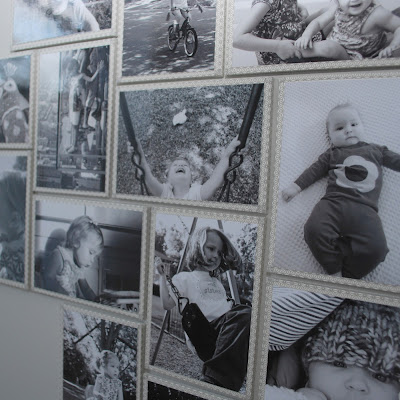 And now the little one gets some props.  It’s about time.