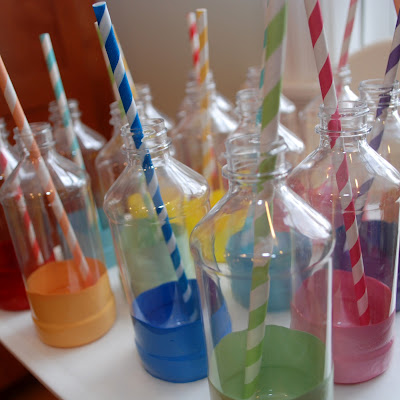 We briefly had sunshine this morning, but it was quickly replaced by cold and gray.  I woke up with a splitting headache that thus far seems to mark the near-end of this head cold I’ve been battling all week.  The only way to turn a gray, headache-y sort of day into anything worthwhile is to inject a little bit of color (and a whole lot of housecleaning) into it.  We were overdo a good environmental clean up around here, and some added color never hurts either. 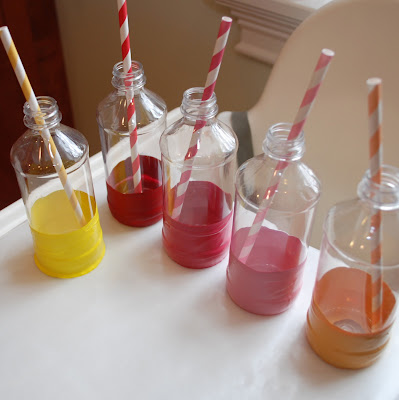 I went back to my favorite party supply shop – Shop Sweet Lulu – and ordered a few things for F’s birthday party.  Inspired by a photo I pinned months ago on Pinterest with a table full of rainbow colored drinks, I knew that I wanted to do something fun with bottles and color.  The park where we’ve rented the pavilion for the event doesn’t allow glass bottles – and really – a table full of fizzy, fruity sodas isn’t really a three year old party thing.  Sweet Lulu’s has the most beautiful glass milk bottles – and now they carry plastic ones as well.  They’re not quite as cute as the real deal, but they will work much better for a group of three-year-olds on a brick patio.  We actually did glass mason jar sippy cups for F’s birthday last year, but I wasn’t as concerned about those breaking since the party was entirely in the grass.  But plastic it is for this year, and now I just needed to figure out how to inject a little color. 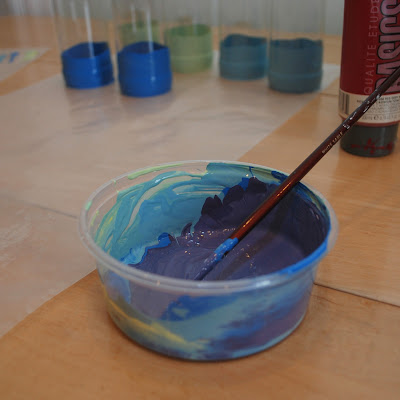 E and I tossed around making colored drinks – like maybe lemonade – but then I just thought it might be too complicated to make a dozen different drinks.  Or it would be sort of gross to make one drink and color it a dozen different shades.  So then I thought about dipping the bottoms of the bottles into paint to match a set of striped straws I also bought from Sweet Lulu – the set has 18 straws – two each of nine colors – and so E and I did a test run with one yesterday afternoon.  This morning we got out four paint colors – I used Liquitex acrylics – and I let my resident mixologist get to work. 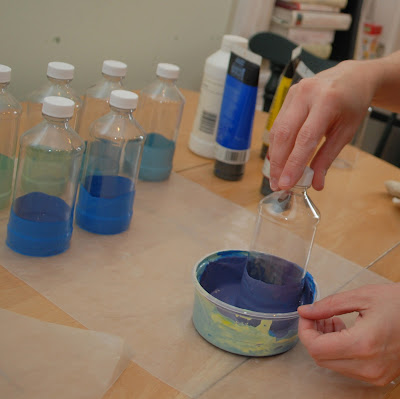 I know I’ve done it since Kindergarten, but I’m still always amazed at what you can get out of red-yellow-blue and white.  E’s particularly good at mixing colors to get just what she needs – and I think she nailed it this time. 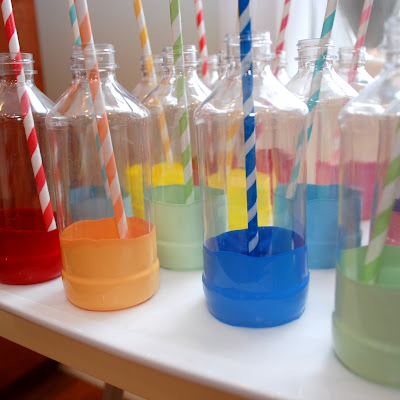 I liked the paint dipping technique, and we used a cheese container for the mixing.  We started with red and added white and more white to get the two pink shades, then yellow for the orange.  We cleaned up and started with yellow, then added blue to get the green shade, then more and more blue for the aqua and darker blue, and finished up with a little red to get to purple.  It really minimized the paint waste that way – we just kept building on the colors that we already had.   If I had planned ahead it would have been nice to use the paint on other things for the party.  I’m sure down the line I’ll wish I had the paint colors already mixed and matched and ready to go.  But this is what we have now, and I’m pretty pleased with the results.  Even plain water or milk will look pretty good in these things.  F danced circles around us the whole time, she was so excited – and she only managed to stick her fingers into the still-tacky yellow one.  And she has some mystery blue paint on her shirt.  Not too bad for a curious two-year-old. 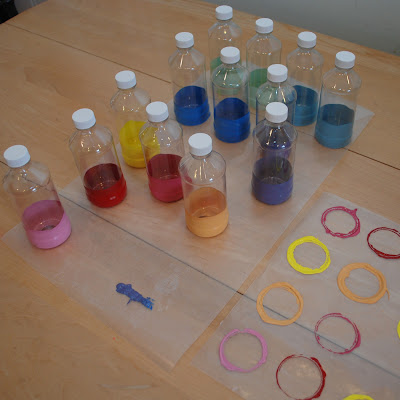 The paint slowly drips down onto the waxed paper, and I picked the bottles up occasionally and moved them around so they wouldn’t dry into a big paint ring on the bottom.  Once they are completely dry on the sides I’ll flip them over to let the bottoms dry completely. 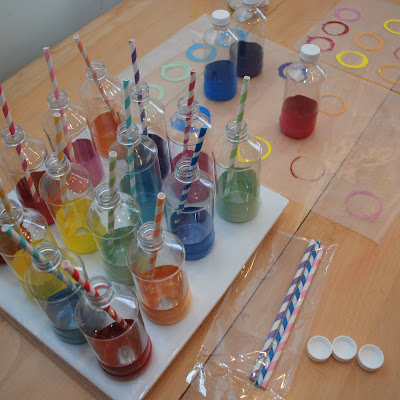 After I started I thought it would have been cool to have these sit on a big white tablecloth and leave paint rings all over it – that would be a cute idea for an art or painting party. 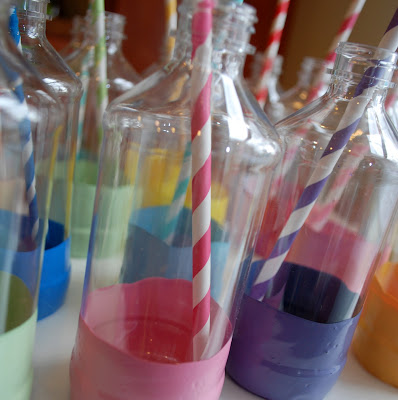 Oh yeah – I also ordered more of these giant balloons like the two red ones from her second birthday.  When my sister reads this she’ll probably decide not to come.  She was the only one with the big enough vehicle to get those two red ones blown up and delivered to the party site.  I haven’t quite figured out how we’re going to get eight of them there – but we’ll think of something.  They are just the icing on the cake. 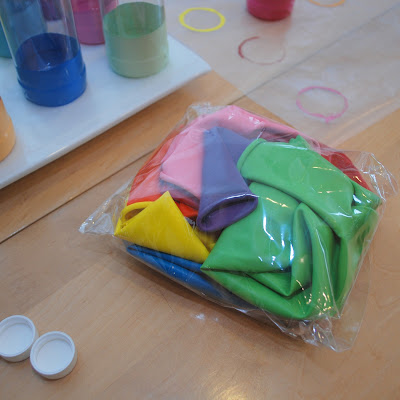 It’s amazing what a clean house, a strong does of ibuprofen, and a little Roy G. Biv can do for a Sunday mood… 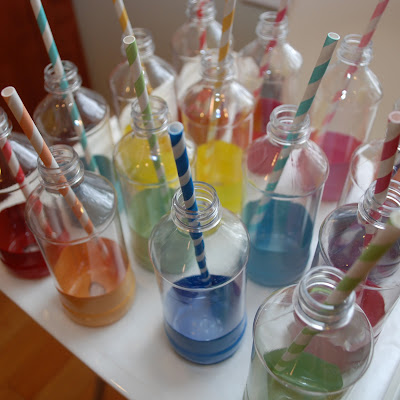 Update: Since we were out of town last weekend, this is my slightly earlier Pinterest Challenge – the challenge posed by Sherry here!  Inspiration photo:  Colored drink glasses: 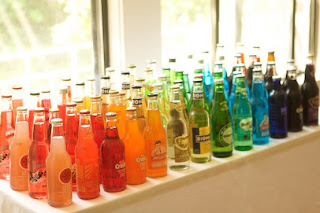 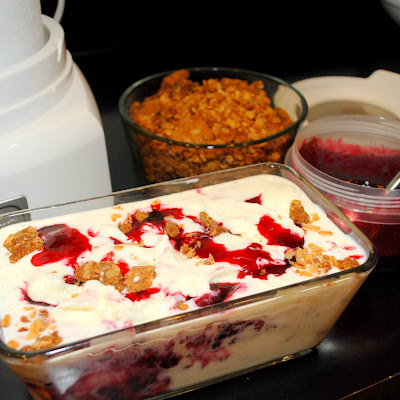 We’re operating on Plan B this weekend.  Plan A was to visit family out of state, but the terrible storms and tornadoes that ripped through the area we were to be traveling through and traveling to put an end to that plan.  It’s a weird feeling to be packed and ready, having taken part of the day off, arranged to pick the kids up early from school and then… nothing.  Returning back home, unpacking, and suddenly finding ourselves with an open weekend.  And now it’s half through and I’m not sure that we’ve really filled it with anything fancy or productive.  There were brief moments in the beginning when we consoled ourselves with the thought that we’d have a little more time to get to this, or that.  But the reality is we are just more worn out, more spent, than we’d like to admit.  If we go and go and go, we generally can keep going.  When our going is stopped, man, we stop.  Like a log.  I feel like a log.  Or maybe a lump.  Definitely a lump, and one with an annoying cough.
Despite all the going, there has still been blackberry syrup in my fridge for awhile, and frozen buttery crisp in my freezer just waiting for someone to go on and make some vanilla ice cream already.  And while the optimism of Friday night (let’s paint some trim!  let’s buy some shelves!  let’s spring clean the house, and catch up on the bills and plan the summer garden and … and.. and!) becomes the reality of Saturday night (let’s iron a few work clothes while we watch Mad Men on Netflix and try to stay awake until Saturday Night Live comes on so that we can sleep through it) – well, at least the ice cream is made.  This ice cream.  Time to move this lump downstairs and find a spoon.