Another thing that has been bugging me for awhile is the state of my dresser drawers.  They used to house my clothes, but when we converted the studio space on the third floor into a nursery, the stuff had to go somewhere.  Over time it’s become a set of drawers where things get shoved – and accessed haphazardly by me and the girls.  I kept telling myself that it was temporary, but now we’re almost three years out and you can see how non-temporary temporary sometimes is around here.
So it was time:  Week eleven:  organize art drawers.

The drawers are really deep – almost 30″, so they hold a lot.  I have them open about half way in this photo.  I put basic art supplies in the top one, books I read recently that are still waiting for a long term home in the middle one, as well as some photo supplies, and fabrics and wrapping supplies in the bottom one. 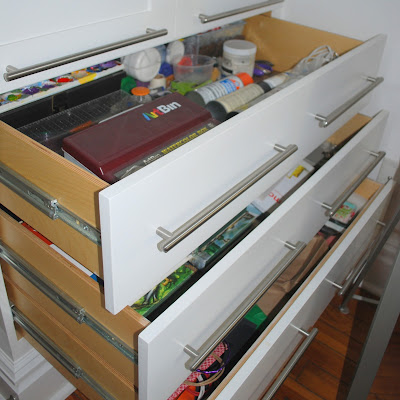 It’s nothing earth shattering, but it does bug me a little less now, and I also have a better idea of what I need to store in the studio when that gets finished one day.  So hooray for little things!