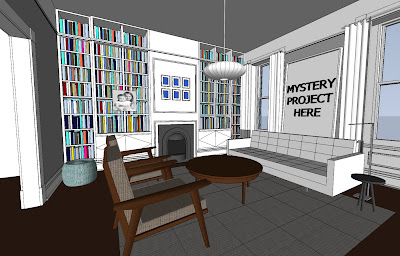 I was having a little fun late one night last weekend, giddy from some of the ideas and projects I’ve been doing and scheming about.  I finally decided to find some Z chairs for the model, and found some that are relatively close – at least in feel and size.  For those of you who aren’t as nerdy as me and don’t use Sketchup to layout your living room furniture, I’ll just tell you that creating furniture isn’t as easy as creating the four walls, or even the bookshelves.  But you can access a whole component library online, and sometimes find something that’s relatively close, and then scale it or tweak it or change the colors until you get something that resembles what you are looking for.  I did that for the chairs, and also for that lamp and the coat rack – the coat rack isn’t as cool as the real one, but I tried to make a quick adjustment and it didn’t work.  Everything else I modeled myself – which is why I’m allowed to call myself a nerd. 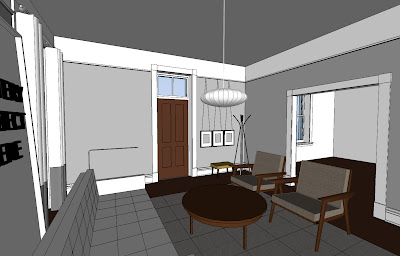 I’ll draw the line at putting actual items that we currently own on the shelf, but I have tried to be pretty accurate with everything in here.  What I’ve really been testing out is where to locate the former TV-cabinet-soon-to-be-entry-wardrobe in the space.  And after testing it a billion (or three) different ways, I agree with my husband.  It’s better in the next room.  Once I took that bulky thing out, the room felt so much better.  I hung some art, arranged the furniture, and contemplated putting myself on that couch with a book in hand. 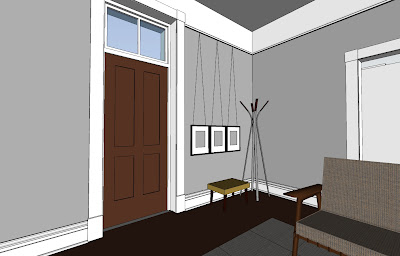 And that big piece of art leaning against the window wall is not really a giant canvas that spells out “mystery project here”, although it would keep things exciting around the place, wouldn’t it?  I just can’t reveal all of my secrets here… and anyway, it’s still mostly in my head (and just a little bit on my desk).  Maybe I’ll put it on that blank wall on the right, but I think I’m going to like it between the windows where you can see it all the way through our shotgun-like house. 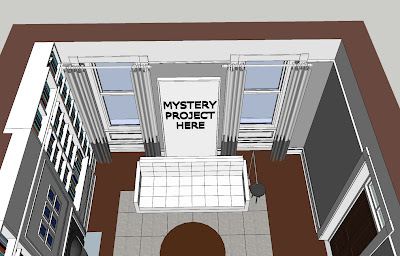 It looks so nice and complete, doesn’t it?  Too bad it’s still got a long way to go.  We have the coffee table and the lamp plus the gold stool.  Some of the artwork is in storage.  And we have the chairs – although they still have pink upholstery.
Still leaves a bit of a list:  Bookshelves, fireplace, hearth, rug, curtains, artwork, couch, side table, floor lamp, coatrack, stool.  And lots and lots of book unpacking and shelving.
Patience. 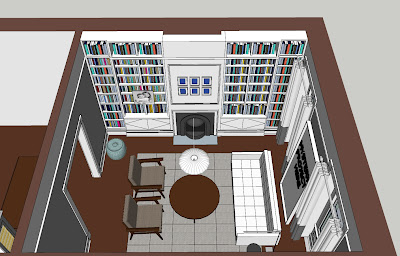