I’ve always tried to make a point to work side by side with my girls when I’m working on anything creative.  They are very used to sitting next to me as I paint or draw or glue or slice into paper with a knife.  When E was younger she’d often stop what she was working on to watch me.  Sometimes she’d pout and complain that the work she was producing wasn’t as “good” as what I was doing.  We’ve had countless conversations about what art is, about the process, about the experimental side of it.  She’s like me – she can see something in her mind and will work tirelessly to get that image out of her head and onto the table.  Over time we’ve both mellowed out and we let things happen in ways that are both unplanned and exciting.  I sometimes ask her about her ideas;  I never ask her what she’s drawing specifically.  I want both girls to know that you can sit down at an easel anytime you wish and just paint.  No agenda, no score. 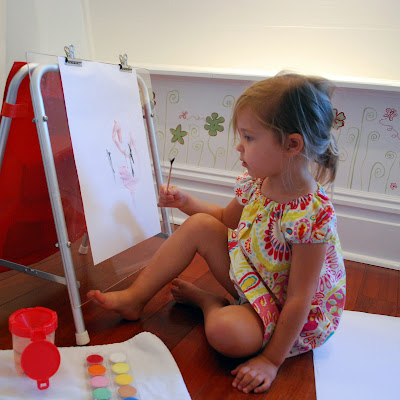 I’m pretty quiet as I work – although I love that time to talk to the girls as well.  It’s a different kind of talk when you are immersed and fully concentrating on something that only you can see.  Sometimes the best conversations happen then.  I never like to be asked about a project that I’m working on.  If I’m asked what I’m making – “what is it?” – I just shrug.  It doesn’t have a name – it’s about the process, and I’ll think about it – and often write about it – later.  But not while I’m working.  Never then.
F got some of her “own” art supplies for her birthday, and since her sister is out of town this week, and her sister’s room is cleared out for the project we’re working on in her absence, we set up shop in there.  She happily experimented with her new watercolors, and the way she could change the shape of the paintbrush bristles.  And then – out of the blue – she said she wanted to paint her party.  She had tried out the entire palette and the paper was covered with a rainbow of colors and shapes.  But that didn’t seem to satisfy her.  I could tell she was working on something more.  It was the first time that I remember sitting down with her and watching her process.  She was focused, and determined to get her ideas out on paper.
“I want balloons,” she said.  “These aren’t balloons.  I want a new sheet.”
I helped her replace the paper, and as I did we talked about balloons.  I asked her what shape she thought of when she thought of her balloons and she yelled “circles!”.  I could see the wheels turning.
“They go very high in the air,” she continued.  I asked her how she keeps them from blowing away and she answered enthusiastically with “a string!”.
“Then start there – with a circle and a string.”
I was sitting a distance away, leaning against the wall, and I picked up my camera again.  She was deep in concentration, completely ignoring me. 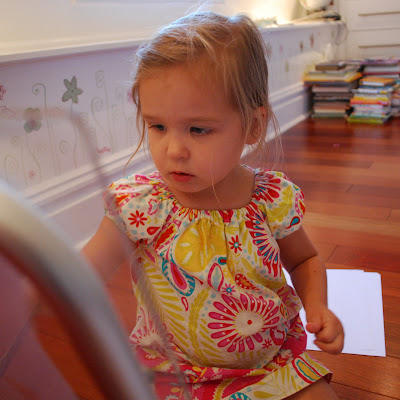 I came around to watch her, just as she finished a red circle.  She dipped her brush back into the red paint and made a line from top to bottom.  Her whole body wriggled in delight as she turned to me.  A cross between a laugh and a scream came out of her mouth.  She had made a balloon.  She had translated the thing she was thinking about in her mind to the paper and it completely delighted her. 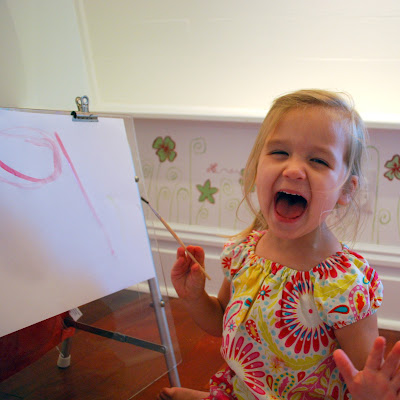 Bubbling over with giggles now, she dipped her brush back into the water and moved to aqua.  Another balloon emerged. 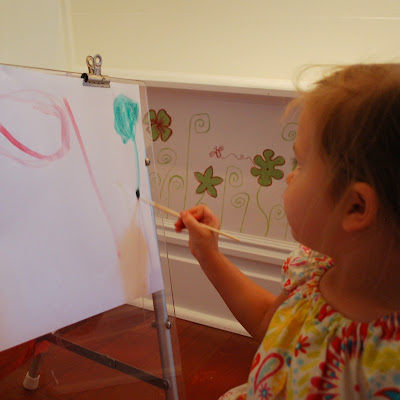 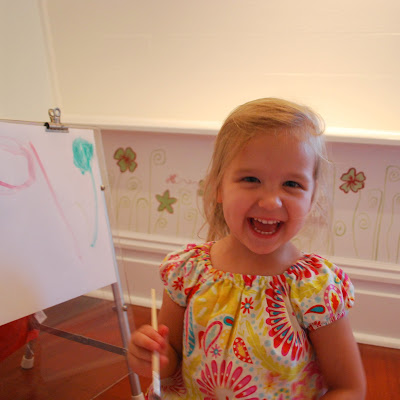 Orange and black, and then even purple that she created by swirling the blue of the string into the still wet red of the balloon.  “I made purple,” she breathed, and then giggled and screamed some more.  She filled that empty ledge with paintings of balloons. I leaned back against the wall and watched her work. 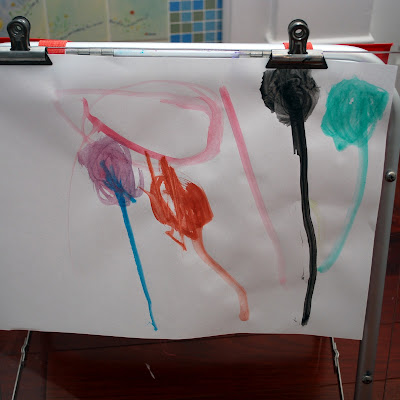 5 thoughts on “a circle and a string”