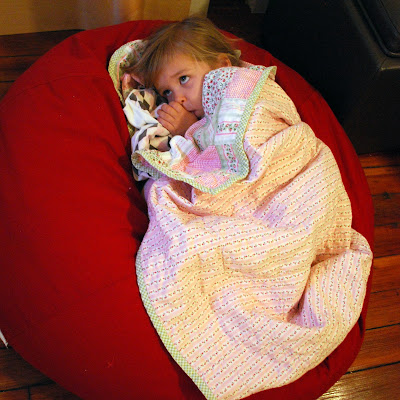 I remember the fatigue that set in this time last year – it resulted from a ridiculously stressful and unpredictable (and then incredible) post season for our favorite baseball team.  Night after night after night we stayed up way too late… but you just couldn’t go to bed early because the best stuff happened in the final inning out strike.  We’ve had tastes of it this year, and sometimes it’s hard to go to bed when you know you might miss the best part.
This photo was taken the other night – F was supposed to be getting ready for bed but instead she had sneaked downstairs and made herself a little cocoon in front of the game.