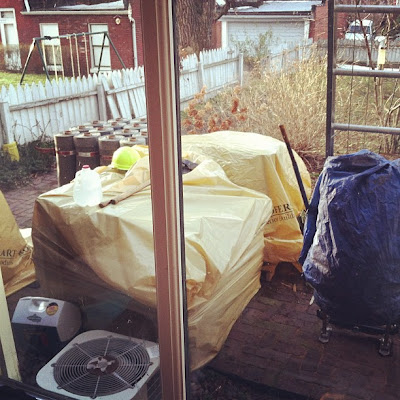 Yesterday the supplies arrived and this morning a dozen men in hardhats and heavy work coats showed up right at eight.  A few minutes later this crane pulled up, and all thoughts of breakfast were gone. 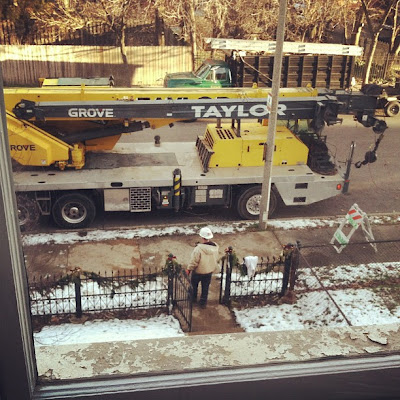 E is supposed to be at school at 8:25, and at 8:24 someone refused to move from that spot below.  Flat out refused. 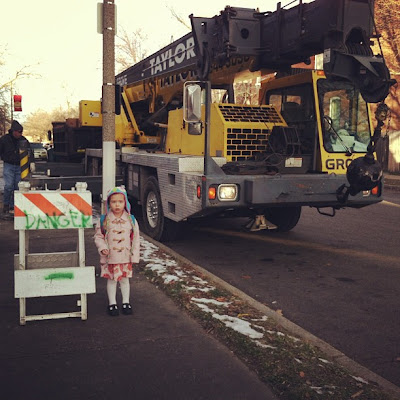 I finally coaxed her away and into the car by promising we’d drive back by after dropping off (the now late) E at school a few blocks away.  We pulled up to the corner by the deli and watched them navigate the crane around the street lamp and up, up, up in the air.  When we finally pulled away there were many tears.  Now I’m sitting at work and thinking it might have been just fine to come in a little later.  Not too many days you have big yellow cranes in front of your house. 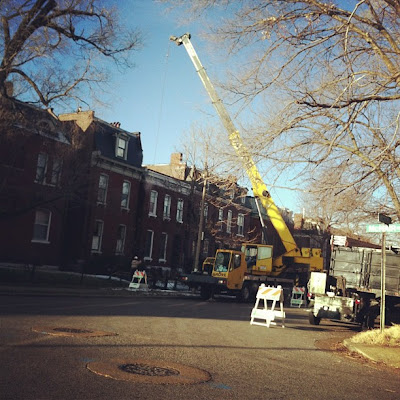 The tears did dry up, and we showed the pictures to friends at school and all was well.  The crane won’t be around tomorrow, but the workers still will, and that should be plenty exciting.
We’re replacing the flat portion of the roof – that’s the majority of the roof on our house.  Two-thirds of the house is three stories, and there’s a two-story portion at the rear with a flat roof as well.  We redid the front mansard roof in slate and copper back in 2003, when E was a newborn – that’s a 100-year roof so we won’t ever have to do that again!  Slide show pictures of that work are here – it was pre-blog days.