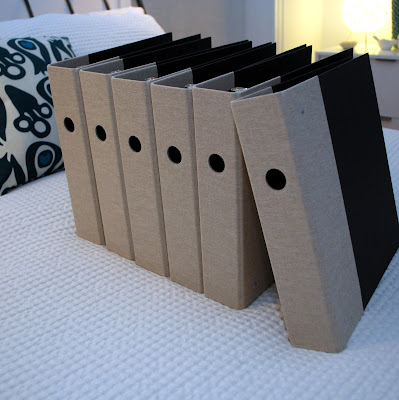 This Friday finds me with my new binders.  I’m pretty excited about them, although I know it means I’ve got a lot of work ahead of me.  They are covered in a warm gray linen and I swear they look exactly like the chairs in the back room where they now reside on the shelves.  Happy coincidence.
If you are looking for some really beautiful binders – and they have several different styles, but I liked this one with the finger hole – then I would take a look at Naked Binders.  They have every color in the rainbow.  I was tempted, but since I already have a rainbow assortment of Kolo albums for the girls’ photographs I thought I would stick to neutral for these.
I’ve gathered a box of miscellaneous house items together, and I have another cabinet full of files.  When I looked back at this small bag of paper items we found in the attic (newspaper clippings, postcards, a photograph, etc.) I saw a copy of a previous owner’s paycheck.  He worked for Union Electric in June of 1960, and his 80 hour gross pay was exactly $200.  He brought home exactly $160 of that.  $2.50 an hour, fifty-three years ago.  Easy math to keep up with.
Seems like such a small amount at first.  And then I remembered my first part time job paid $3.15 an hour, but I got a raise to $3.25 pretty quickly.  The highest paid employee there made $6.00 an hour.  That was twenty-two years ago.  Kind of hard to believe that the minimum wage isn’t much more than that, even now.    Making minimum wage in 1991 I could put about three gallons of gas in my (non-existent car) for an hour’s work of take home pay.  Today I could buy a gallon and half of milk for an hour’s work at minimum wage.
So I guess maybe this Friday finds me thinking of file organization (number 8 on my list), numbers and perspective.  Grateful that I didn’t have to work six hours in order to purchase the six items above me.  And humbled a bit that many people would.
…..
Hope you had a great week – maybe the first full week back after a string of partial weeks due to the holidays.  I always think this week is one of the toughest ones.  Have a great weekend.