Posted on January 25, 2013 | Leave a comment
I’m turning the tables – this might be your very own Friday Find!  Our new couch arrives tomorrow morning, and we need to clear out a few things that we no longer have room for.  Nothing like waiting until the last minute.  I plan to list these things next week on Craigslist, but thought I’d give you guys first dibs if you are interested.  All four items are in great condition – they just don’t work with the current direction we are moving in for the living room. 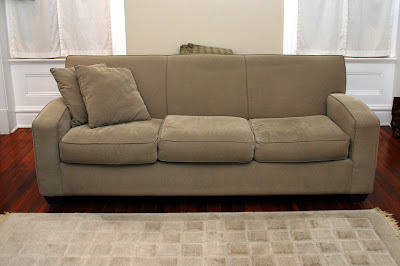 We purchased this couch a dozen years ago from Intaglia (there are no longer stores in town, but they are still going strong in Atlanta.)  We paid around $900 (on sale) for the couch – our biggest purchase EVER as newlyweds, but we were desperate to replace the hand-me-down sleeper sofa that my parents recovered for me to take to graduate school.  I lived in a studio apartment during that time, and so it was perfect… except for the fact that the bed was so extremely uncomfortable that I stopped pulling the bed out at night and just slept on the couch for most of my graduate school days.  And considering I was working on my Masters in architecture – it’s not like I was really sleeping anyway.

Compared to that first couch, this thing is a dream.  We have no pets, don’t smoke, and never ate TV dinners, so as a result, the couch is in great shape.  It’s a grayish-green, full size (84″ long) with three cushions and two pillows. 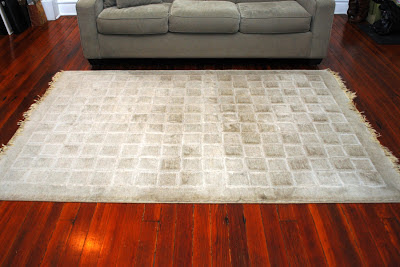 Also purchased at Intaglia – I think it’s roughly 5’x8′ and it’s cream colored, with a pattern of squares.  The rug itself is in good shape, but the fringe is showing a little wear.  It could be removed or replaced fairly easily. 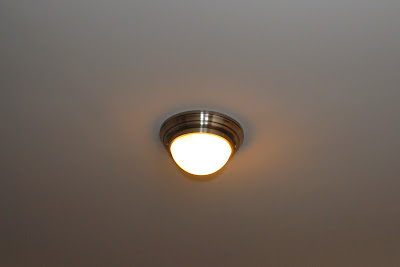 This light came from Restoration Hardware (cha-ching), purchased with some of those (much beloved) Restoration gift certificates we got as housewarming gifts.  It’s also in great shape, but we’ve replaced it with a pendant light in this space because our ceilings are so high.  Finish is a brushed nickel.  I’ll have to get the measurements for you – I can’t remember the diameter, but it was the largest size, so based on the current offerings at RH, I’m guessing it’s about 17″ in diameter.  It looks small in this photo because I’m taking the picture without zoom from about six feet below. 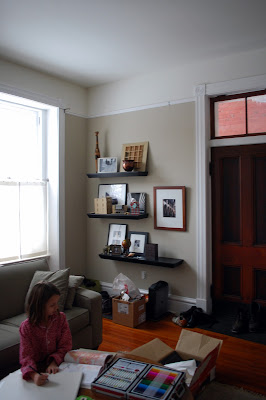 These came from Pottery Barn – and they are in perfect shape.  We just don’t need shelf overload in this room now that we have the bookshelves.  These are really well made, and have a nice mounting system – they are a lot beefier then some of the cheaper ones you see at Target or IKEA.  The finish is a dark espresso color, solid wood.

If you are interested in any of these items please contact me at thirdstoryies at gmail dot com – feel free to ask questions, and as always, first come, first served – (I have one looker at the couch right now). 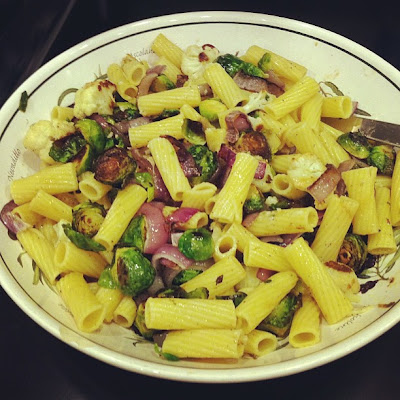 As a child, I don’t remember being tortured by Brussels sprouts.  I can vaguely recall not liking the canned ones and refusing to eat them, but I don’t think they made a regular appearance on our kitchen table.  I’m quite sure that I had them at various holidays, and I can remember them being served a long time ago at Thanksgiving, but I don’t have scary flashbacks to bad Brussels sprouts encounters.  I do, however, have scary flashbacks to salmon croquettes and those frozen mixed vegetables (the square carrots and peas).  Even dicing fresh carrots can bring on an attack of reverse nostalgia.  Man, I hated those things, and I really hated having to “clean my plate”.  I have some twisted childhood stories about how I managed to get “around” eating some of those things – but that’s a story for another day.
This Friday finds me eating Brussels sprouts – again.  I didn’t have to work hard to convert the little one, but I’ve made the recipe three times now and might slowly be swaying the big one over.  She’ll eat the pasta and the cauliflower, as well as the Brussels sprouts,but neither girl will touch the onions, even though they are roasted to the point of being as sweet as candy.
The roasted vegetables are yummy, but the combination of the pasta and the oil and the cheese and the juices from the veggies create this really buttery flavor, without the butter.  I’ve never tasted a dish that flavors the pasta so well – every bite is delicious, even if you don’t have any vegetables on your fork.  It tastes delicious the next day for lunch (which is why I’m calling this a Friday Find even though we made it on a Thursday).  It goes together pretty quickly, and the vegetables roast up quickly, so it’s a great weeknight dish.

Last night the girls came running into the kitchen for dinner and E yelled to her sister “F!  Look!  It’s Brussels Sprouts!”  Now that’s a weeknight miracle if I’ve ever heard one.

Roasted Cauliflower and Brussels Sprouts with Rigatoni
adapted (and enlarged for 4, plus leftovers) from Real Simple
Ingredients:
Directions:
Pre-heat oven to 450° F. Cook the pasta according to the directions on the box, and then drain, reserving a cup of the pasta water for later.  Once drained put the pasta back into the pot.
Toss the cauliflower, Brussels sprouts, and onion with the thyme, 3-4 tablespoons of the oil, and ½ teaspoon each salt and pepper and spread over 1-2 rimmed baking sheets (cover with foil first for easier cleanup if you like). Roast on the center rack of the oven, tossing the vegetables, until golden brown and tender, 15 to 20 minutes.
When the vegetables are done, add them to the pasta pot along with the pecorino, ½ cup of the reserved cooking water, and the remaining 2 tablespoons of oil to the pasta and toss to combine (adding more cooking water if the pasta seems dry).
Serve while hot, and sprinkled with additional pecorino if you so desire – and why wouldn’t you?