(story)time: Sylvester and the Magic Pebble 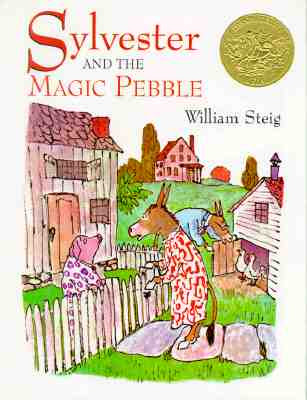 I do love me some William Steig.

One of my very favorite books as a child was Sylvester and the Magic Pebble.  Sylvester finds himself in the possession of a magic pebble – it’s drawn as a perfectly round, red stone, and when Sylvester is touching it his wishes come true.  It is nearly impossible as a child to read about such a pebble without thinking about all of the wondrous possibilities that might unfold with that little red stone.  Sylvester toys a bit with his day, the weather… but then he finds himself in a dangerous predicament and, in a flustered moment of panic, he wishes to become a rock to avoid being noticed (or worse, eaten) by a passing lion.

The problem with this wish is that (as a rock) he can no longer hold the magic pebble to wish himself back to Sylvester again.  Time goes by and he berates himself for his hastiness.  He could have wished the lion away, he could have wished himself back home with his family.  But turning himself into a rock?  He’s trapped, and he has to watch the seasons (and his poor, distraught parents) go by.  I can remember a childhood full of books of lost children – there are so many of them – but I don’t recall another story where the lost child isn’t wandering, and where you see the joy and the light sucked right out of his parents’ very existence when the center of their universe is gone and they have no answers.

Steig doesn’t shy away from this pain and despair, even in a children’s book.  I can never read this book to my children without them snuggling in tighter, closer to me, and I always catch my breath a bit when I watch those poor parents trying to go outside once again after seasons and seasons of grief.  (Thank goodness they do – what an ending!)

Other Steig favorites in our house are Pete’s a Pizza – try to read this book without turning your child into a giggling pepperoni pie.  It’s hard.  We don’t own , but we’ve checked it out many, many times from the library, and a few weeks ago we also checked out Doctor De Soto Goes To Africa.  F requested both books every single night.  Dr. De Soto and his wife are clever dentists that outfox the fox.  It’s a terrific story of professional skill, compassion and self preservation – but I’m a sucker for the various contraptions the tiny dentist uses to work on large animals, and the side-by-side staircases of different riser heights on the last page.  We search out the details like this in the best of the best books.  I love the cleverness of it all. 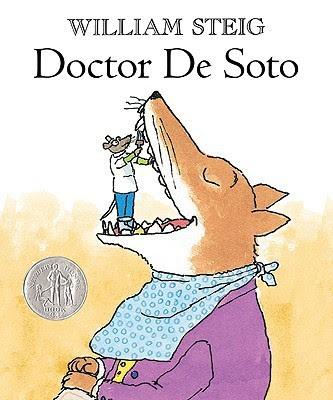 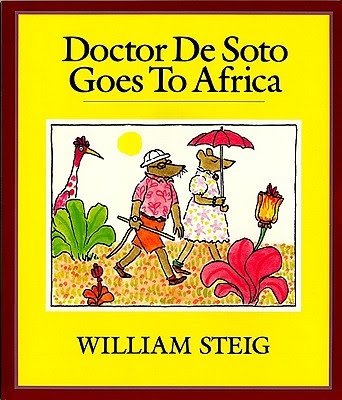 I mentioned that the girls got Brave Irene from a friend for Christmas.  My mother loves this book (she taught third and fourth grade for years and years), and my girls were spellbound when we first read it.  When we finished it, E said “now that was tense.”  Tense it is, but the  heroine pulls herself out of some serious snowdrifts to help out her mother and save the day.  F named her new doll “Irene”, and said she’s “just Irene, but she’s brave when she needs to be.” 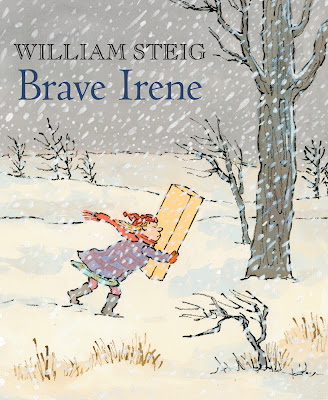 This is why I love books, and why we read them like crazy in our house.  Because three year old’s can name dolls after plucky heroines and start to recognize traits of bravery, intuitiveness, compassion and silliness – and know when to pull those traits out to meet the challenges that life is sure to throw our way.

…..
I would recommend most of these books for ages 5 years and up, although a younger book lover (like F) can also love them.  They cover some pretty intense topics (like a lost child, a fox plotting to eat his dentist, kidnapping, violent snowstorms), but nothing that children’s literature hasn’t seen before and that most kids can’t handle.  Pete’s a Pizza is a fun book for any age – and is particularly fun to read and to act out.  We did a lot of baby “pizza making” on the changing table when the girls were little.
Do you have a favorite Steig book?  (I have a least favorite – Shrek.  I know, I’m weird.)  Please share, if you’d like.
Find these titles at your favorite local independent bookstore. Happy reading! 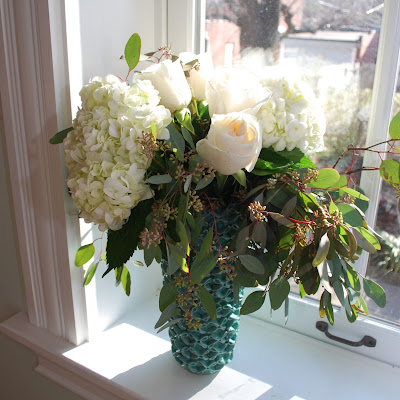 I posted an Instagram photo of these flowers from earlier today, but the Open House is over and we brought them back home and placed them in the window.  The afternoon sun was shining in, and I grabbed the camera because there is just something so nice about beautiful flowers in the window on a cold January afternoon.  I love the way these arrangements turned out.  I was trying to stay around a $50 budget for the school’s event, and I needed three big arrangements and two smaller ones.  I’ve been having great luck with the choices at Whole Foods – particularly because they carry lots of $5 clusters of flowers or greenery – one type per bunch – and so it’s really easy to grab several of those and put together some really beautiful arrangements. 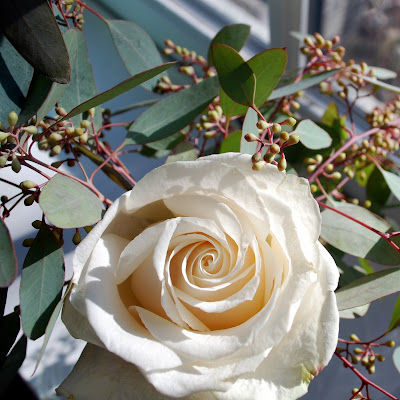 I was standing there contemplating flowers for quite awhile.   There were big tubs full of spring bulbs like iris and tulips, but those seemed a little too springy (although I do like to see signs of the spring I wish were a bit closer).  Other combinations of flowers seemed too fallish, and similar to the arrangements I did for the grandparents’ breakfast in October.  I kept coming back to the seeded eucalyptus – it was this really beautiful combination of green leaves and purplish-pink seeds and stems, and the white hydrangeas were particularly pretty.  I got two bunches of the eucalyptus and two bunches of the hydrangeas (six big ones), but I needed something else.  There was one lone grouping of a dozen roses – not white / not cream, but the tiniest blush color.  They were perfect. 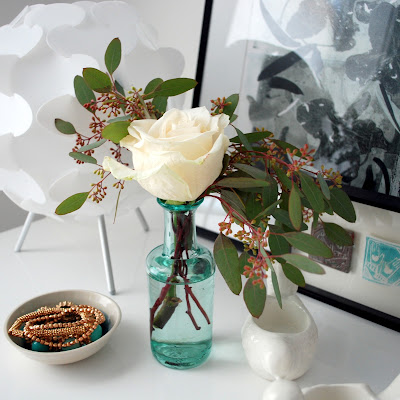 I busted the budget by $5, but I ended up with a tremendous amount of flowers and they really looked great, particularly in the collection of different vases that I used.  I’m sure every WF is different, but if you are looking for some flowers in the near future, you might see if they still have some of these.  For $15 you could really do a knockout arrangement with the three giant hydrangeas and the eucalyptus – and throw in some of those roses and you’ve got a pretty amazing Valentine’s Day bouquet. 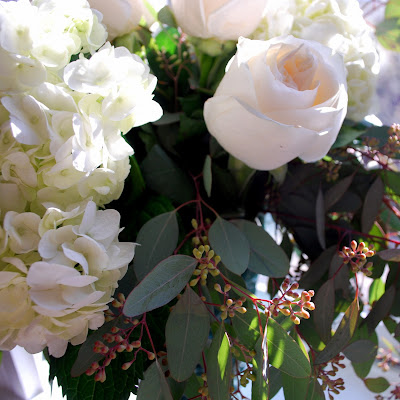 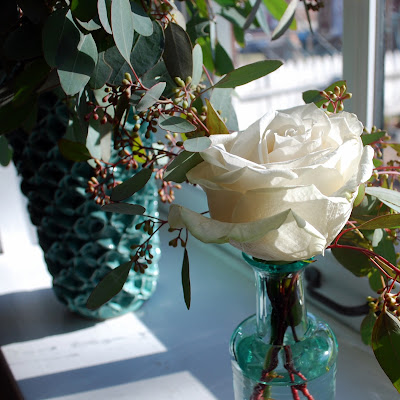 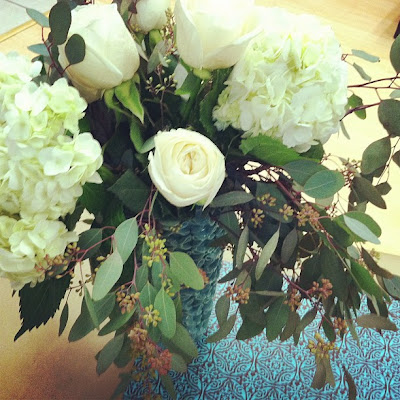 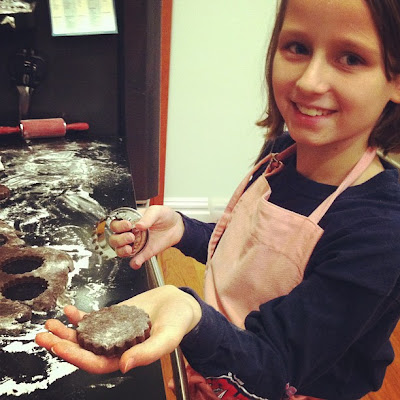 Lots of flower arranging and treat making going on around here last night.   It’s Open House at E’s school today, so stop by and visit if you are in that delightful family stage of making school decisions.  E’s a tour guide, so you might get to enjoy that treat… and you’ll certainly enjoy lots of other treats because all the best foodies turn out the good stuff for this event.
Skip your coffee and donut run this morning and come by – details here. 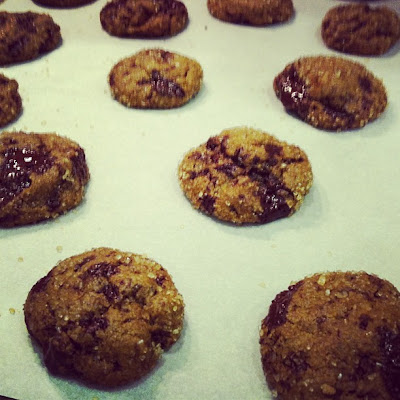