A love story and a bathroom.  Seems like a bit of a stretch.

…..
The elevator door opened and my escort led me through the doors and into a long, white hallway with color coded square tiles on the floor.  We passed several corridors on the left and the right, and then she pointed straight ahead and said “Module F – he’s in F-6, just on your left.”

I entered a large room with a nurse station in the center and my eyes made a quick pass around the room, looking for identifying numbers.  I saw him sitting in a reclining chair across the room, white as the sheets around him, white as the walls and floors, eyes open and talking to the nurse by his side.  I realized I had been holding my breath, maybe for awhile.

…..
We sat in that room for a few hours while the anesthesia wore off and the nurses discussed the surgery and the follow up care and the pain treatment options.  At first when he talked he sounded like he had just come out of dental surgery, not hand surgery, cotton-mouthed and slurry.  His voice slowly cleared up and then his color came back, and he stopped looking like the sheets.  Every couple of minutes he would tell me the same stories again, and I would laugh and tell him it felt like the movie Groundhog Day.  He’d look at the clock, puzzled, and then rest a bit, waking to tell me the stories once again.  I told him I was glimpsing the distant future of our days together, sitting next to one another, repeating ourselves.  He said, no – first we would sit with our parents, then each other.

He doesn’t remember any of these conversations now, but I do and they make me smile just like the color returning to his cheeks made me smile.  My sister gave him a vest for Christmas; now it’s perfect for an arm and hand with pins in it that won’t fit inside of sleeves.  We take care of one another, even in ways we do not know.

When I look back through these old photos they seem like a lifetime away, and not just a decade or so.  We look younger, and dirtier.  We smile a lot, for sure.  Memories are such fleeting things, really, and we don’t control them at all.  We can try to sort them and recall them at will, but even those actions are not guaranteed.  I will photograph and document and write and retell, but it’s just a brief snapshot, it’s not eternal.  But the act feels necessary, just as necessary as the telling and retelling of those stories as he slowly woke up and came back to me.

The original house had no bathrooms, but they were added at some point on each floor.  There was a tiny toilet behind that door, and the complete bathroom was about four feet by four feet.  Tiny tub, tiny sink.  We took most of it out with a sledge hammer, except for that faucet that we would later install into the homemade play kitchen for our daughter.  I had remembered the cast iron fixtures as pink, but when I hunted through the photographs I discovered it was the walls that were pink. 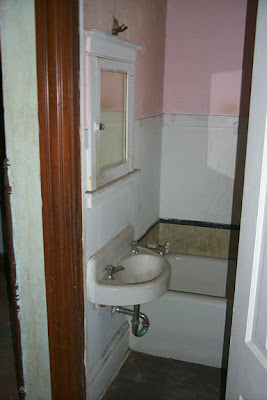 We installed a new half bath on the first floor, with plumbing snaking its way up through the new walls to a second floor master bathroom and laundry room, and then on up to the third floor bathroom for the girls. 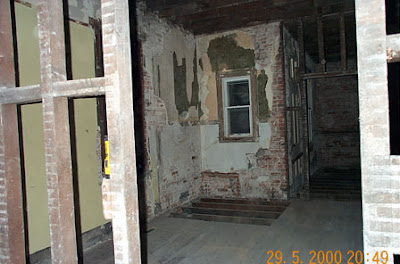 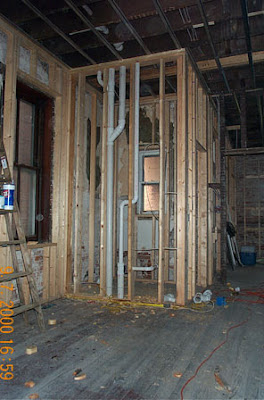 We chose a simple white hexagonal tile to use in all four of those rooms listed above, but we did a different black tile pattern in each room, carefully cutting out white tiles and inserting black ones in to make the pattern.  I remember the night we tried to work out the pattern for this bathroom.  We quickly learned that a six sided object organizes itself differently when running horizontal or vertical – one side is point to point, one side is flat to flat.  So we would find a pattern we liked in one direction, but it couldn’t make the ninety degree turn.  The night wore on and we got a little silly.  When borders of “WASH ME” and “POO” started to appear we knew it was time to call it a night.  We laid out our (fast-approaching) wedding date in black tiles and smiled at the thought of a blank floor, a blank slate, a blank house, a blank life to write upon. 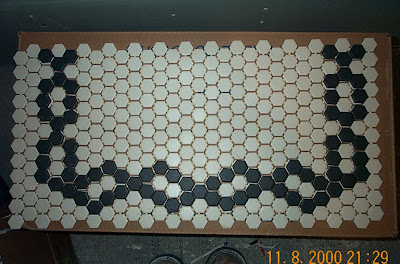 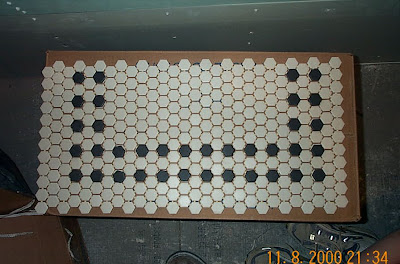 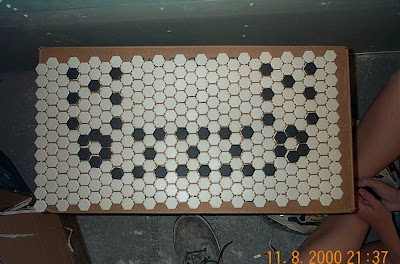 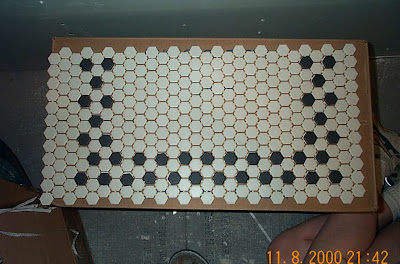 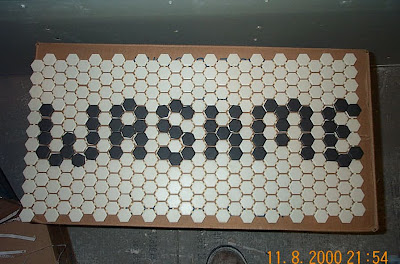 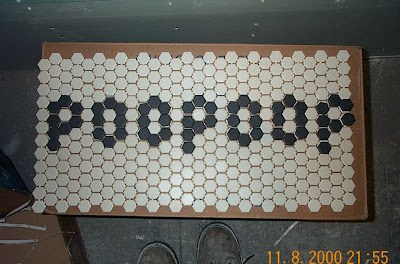 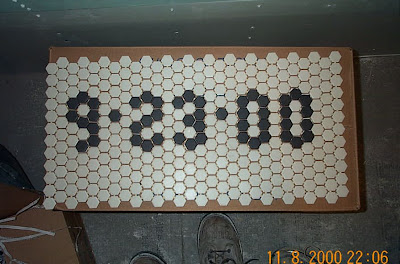 We had never tiled a floor before – we had never really done any of this stuff before.  But we did it.  We studied it, we tried it, we fixed it and we moved on. 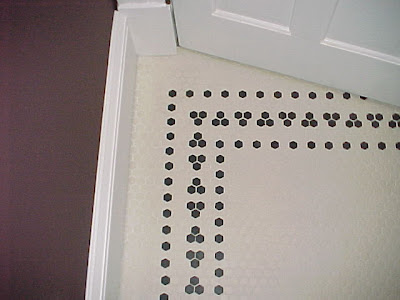 We used the rest of that eggplant paint in that room, and it was much better in a smaller dose.  I love the fixtures in there – the modern take on an old fashioned console sink.  The mirror hides a stash of extra tissue, and the light is really fun – uplighting and downlighting the space that otherwise might look a bit like an elevator shaft. 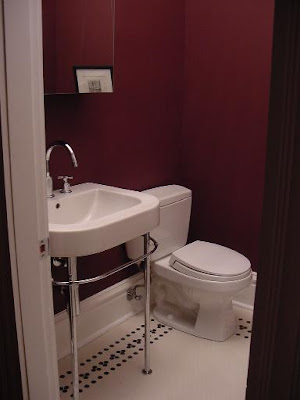 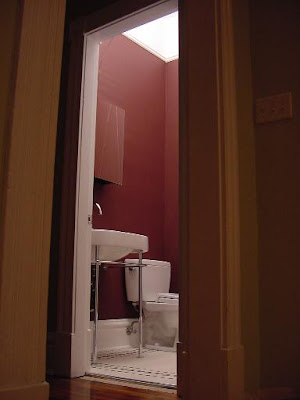 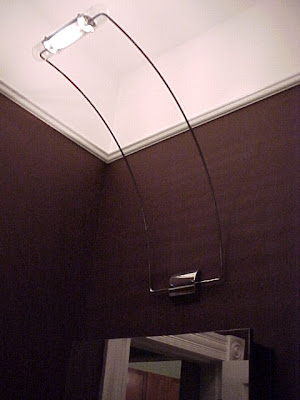 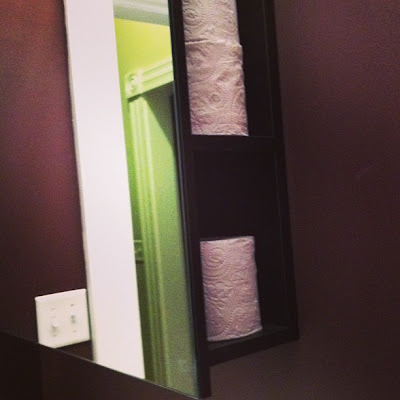 This room was the first room to have all the original trim reinstalled.  I remember how good it felt to finish off a space – even a tiny one like this one. 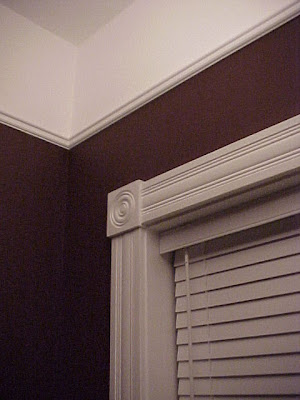 I drew this picture of our house and framed it for him for our first anniversary.  He surprised me with tickets to Chicago for that same anniversary, and we sketched out ideas for our laundry room on airplane napkins. 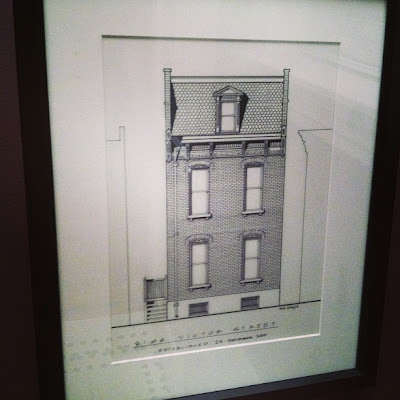 The paint is a flat paint, and so it hasn’t worn well, particularly in a bathroom.  I have plans for the makeover in this room – I even have the paint – but it’s one project at a time right now.  Right now we’re healing and resting and trying to get through the laundry piles.  And while we do that I’ll continue retelling some stories, and smiling when he does the same. 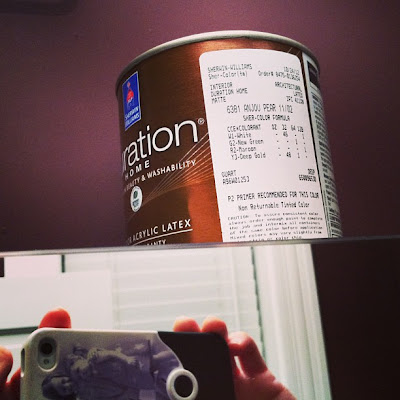 3 thoughts on “lucky thirteen: a love story and a bathroom”