lucky thirteen: a love story and a bathroom

Posted on February 14, 2013 | 2 Comments
We’re currently celebrating our house’s thirteenth birthday (thirteen years with us) and its 128th birthday on this street.  To watch and read about the whole process in those early years (pre-blog), check out our rehab slide shows, nine of them, here.

Is it a little weird to celebrate love and a bathroom on Valentine’s Day?  Perhaps, but let’s go for it. 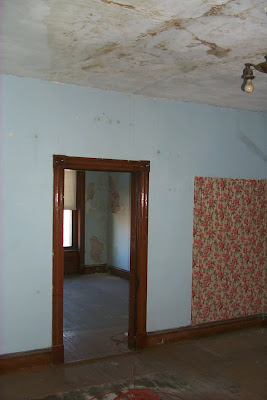 You may recall that the house was originally a two-family flat, and so there was the issue of inserting some vertical circulation through the house to convert it to a single family home.  The stair landed in the center of the house, and so the middle room on the middle floor was divided into three spaces:  the stair hall, a master bathroom and a laundry room.  I will also tell you that we made the deliberate choice to not connect to the basement on the inside, leaving the stair access at the rear of the house.  Occasionally this is a pain when we have to head out into the storm to seek shelter in the basement for tornado warnings, but on a daily basis I’m much happier having the extra floor space and openness that we would have sacrificed in order to add that interior stair. 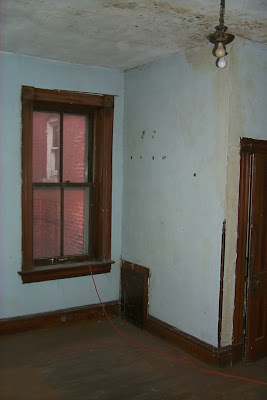 We also considered having a bathroom that opened directly from the master bedroom, but we nixed that idea as well.  We didn’t want to give up the real estate on the bedroom wall that we eventually filled with wardrobes, and we also wanted to be able to access the bathroom from the hallway so that guests staying in the (future) guest room on the same floor could use this bathroom as well.  I personally like having the bathroom separate from the bedroom now, particularly since M and I occasionally have such different morning wake up times.
The second floor was just as disastrous as the first floor, and so we did the usual drill – removing plaster and lath, 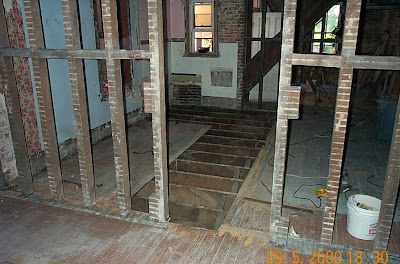 removing some of the old wood flooring (and saving it for patching in other places) so that we could install cement board and tile flooring, 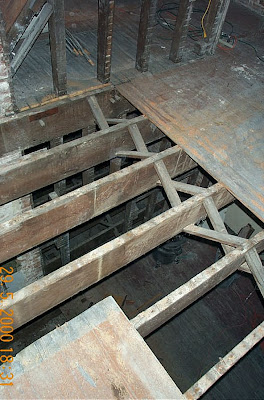 and running plumbing and mechanical and electrical items through the walls. 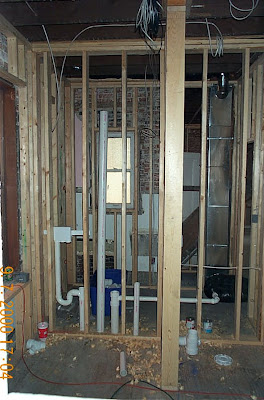 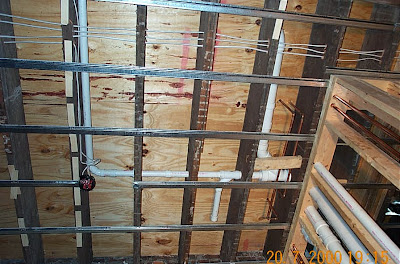 I like this picture of M removing the flooring because it reminds me of the (undocumented) episode where he was removing the attic flooring over our bedroom and accidentally stepped his size 16 work boot through the ceiling.  He probably dislikes this photo for the same reason.  Happy memories, my sweet Valentine. 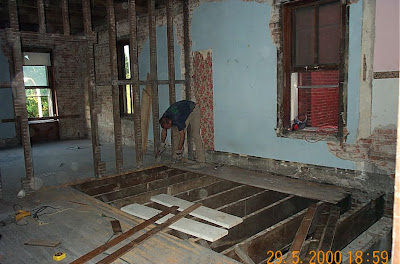 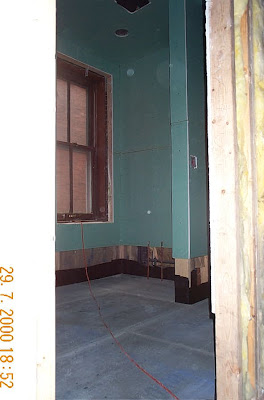 ..and another tile floor and border pattern. 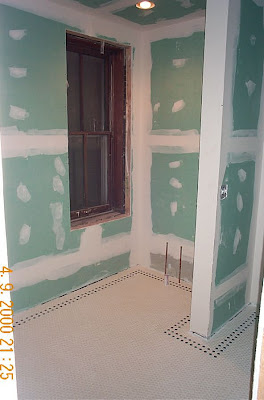 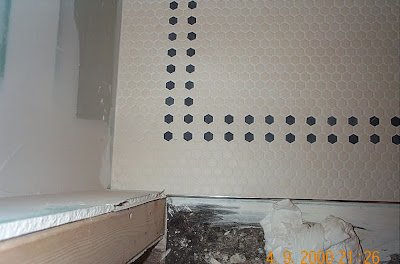 I do believe this was the first old door we stripped and reinstalled.  We have an eclectic array of doors in the house – some salvaged from the house and some found in local architectural salvage places.  We framed all of our doors to a certain height initially, and then framed down according to the actual door height. 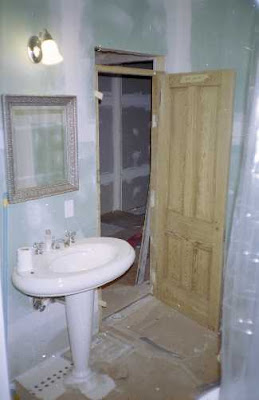 Nothing says master bathroom like this photo.  Swanky.  I do love my tub.  The perspective’s kind of misleading in this photograph, but it’s almost six feet long, and a slipper tub, meaning it’s higher in the back, perfect for a long soak.  It weighs over 300 pounds empty, and it was carried up the old rickety outside stairs.  We’re lucky no one was killed in the process.  We still didn’t have interior stairs at this point. 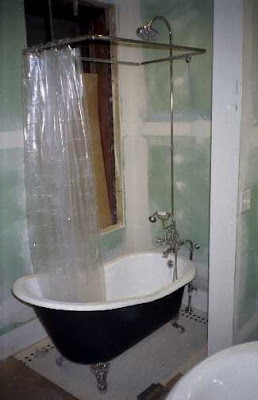 Eventually we got around to painting the room, 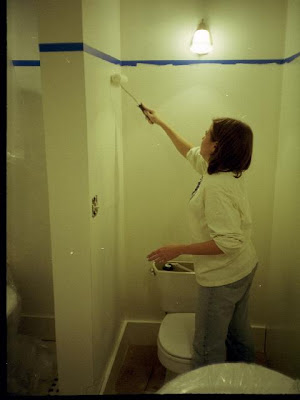 and made plans to install wainscoting in the room (in this photo it’s just paint striking that line.  You can see that the original window had not been touched. 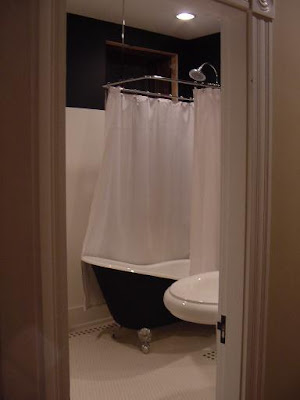 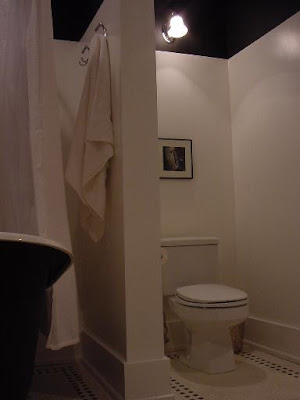 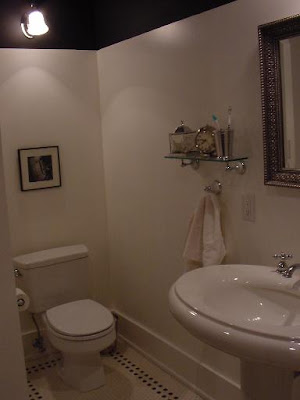 We trimmed out the window, and added the top rail of the wainscoting (not pictured), but still haven’t gotten around to putting the picture ledge up or the vertical members.  It’s been pretty low on the agenda. 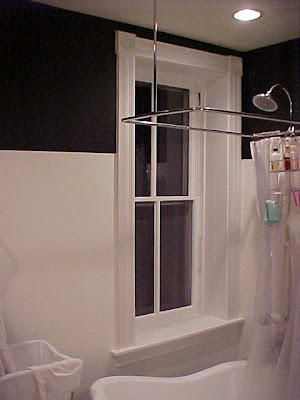 This room works pretty well for us, but we’ve never completely finished it or committed to any real design direction in there.  But I’ve got plans.  I want to finish up the wainscoting – adding the picture ledge at the top, and the vertical boards.  And then I want to paint the ceiling and top of the wall a crisp white and paint the bottom wainscoting an inky indigo – something like these rooms: 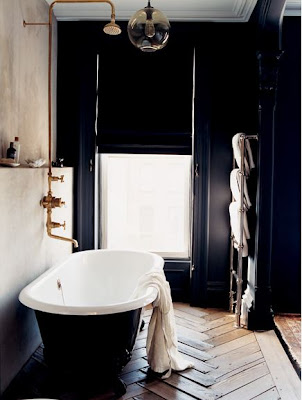 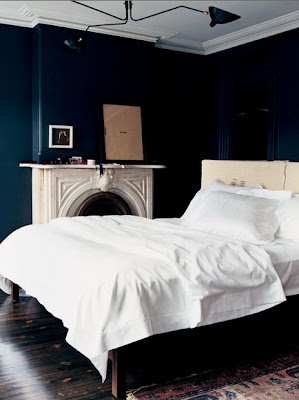 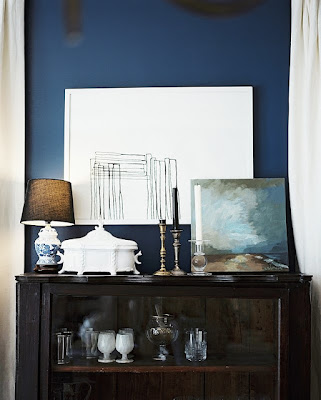 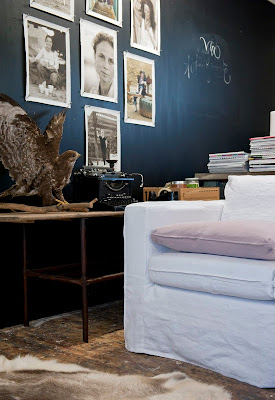 Photo Source
We need a bigger mirror to bridge the distance between someone who stands five and a half feet tall and someone who stands six and a half feet tall – maybe even adding some interesting shaving mirror.  M keeps his head almost shaved, and does it himself, with a handheld mirror.  I’m not sure that we can eliminate that, but it might be nice to have some different mirror looks going on in there.
We also want to change out the lighting completely (except for the recessed downlights).  We installed some okay-ish wall pendants from Home Depot in the beginning, but they aren’t anything special, and I like special lights.  I may or may not repaint the base of the tub – it’s currently black, but maybe it could go the same indigo, or even pick up a different color or a lighter gray (like the adjacent stair hall will soon be).

I love the rolling laundry cart in the room, and we do use it for towels and washcloths but the laundry room is right next door, so it’s not a huge stretch to get rid of it.  It’s a little crowded between the tub and the cabinet right now, although I know I shouldn’t call this bathroom crowded when it really is quite big and airy.  I’d like to introduce some wood like teak into there, and I’d also like a ladder like industrial towel warmer.  The current cabinet that’s not pictured anywhere (an old pie safe with four thousand coats of paint on it) works well, but the doors are currently open so all our stuff is on display.  I’m wishy-washy on painting it again.  I’d love something in wood in there, or some kind of industrial looking pharmacy cabinet, but it’s not a huge priority.  I drew up plans years ago for a built-in solution, but M felt like every room had the same storage solution (even though they all look quite different) and there’s something nice about having furniture step in for cabinetry in places.

And if you want to buy me a Michelle Armas piece for the room, well… I won’t stop you.

So here’s a mood board to get the juices flowing.  (You can always click on these to make them larger.)  The fixtures will all stay, and are working perfectly – although we need to replace the faucet that simply cannot be repaired (M’s tried.)  The tub is a bath-loving girl’s dream.  I love the waffle weave shower curtain in there, and I forgot to mention this, but I switched out the inner plastic shower liner with washable polyester shower curtains (like hotels have) and I couldn’t be any happier.  1.  No more stinky plastic off-gassing, 2.  No more gross, hard to wash, grime and build-up, and 3.  The stupid hooks on metal ball bearings NO LONGER FLIP OVER.  This was life changing.  I like the look of the metal grommets on the outer curtain, but I’m happier with the button holes on the interior curtain because now the hooks work like they should.  Sometimes it’s the little things.  Next up, switching out the girls’ plastic liners, now that I’ve given these a good test run and washed them.

I love this room, but I’m going to love it even more soon.  There’s something about the size and scale of a bathroom, coupled with the functionality aspects, that makes designing the space so much fun and very approachable.

Last night was a doozy, with late night meetings and then even later night cookie decorating.  It’s pretty nice to have a room to escape too and relax a bit after all that.  So I’ll dim the lights (they do!), light a candle, and take a nice long Valentine’s Day soak.  See, I told you I could talk about love and bathrooms after all. 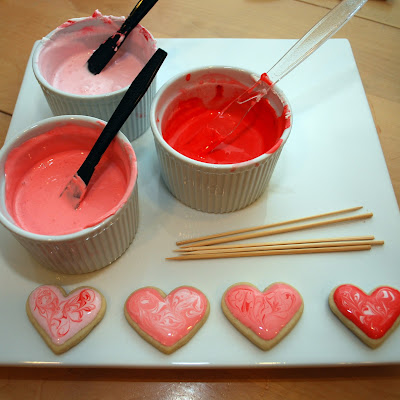 I had a small cookie order this week (4 soccer balls) and so I decided I had no excuse not to use the remaining cookie dough from that batch to make Valentine cookies for the girls’ friends and teachers.  It turned out to be  a pretty busy week, but I had planned ahead for that and made the dough Monday night, baked the cookies Tuesday night, and then decorated them last night after arriving home from a late meeting (so forgive the poor lighting in these photos).
I realize that this is kind of a late tutorial, since today is the day, and I don’t regularly do tutorials anyway, but this is a fun, easy way to decorate cookies with high impact results.  Especially if you have a cookie helper who’s more than willing to swirl. 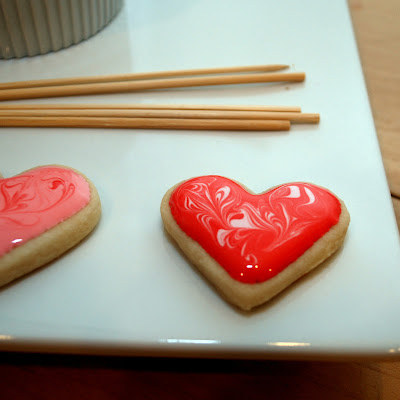 The key to getting a great looking iced cookie in the first place is royal icing at the right consistency – meaning just thin enough to spread out and not leave ridges where you iced it, but not so thin that it runs off the edge.  Surface tension is your friend here. 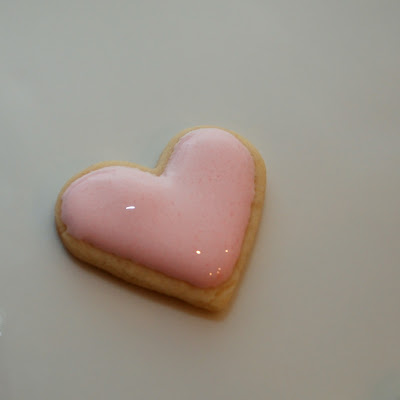 Then you drip a different colored icing onto the still wet base icing – the pattern doesn’t matter one bit. 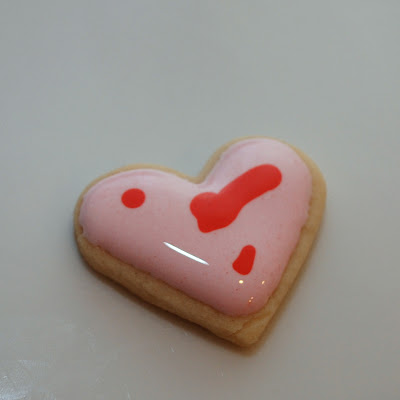 Swirl in some figure eights and random circles to mix the icing colors and voila! 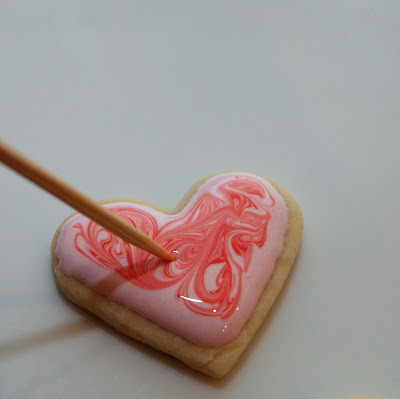 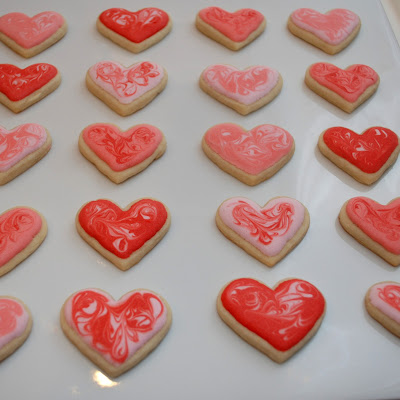 Have a great day today, and check back later for another installment in our house’s birthday celebration.