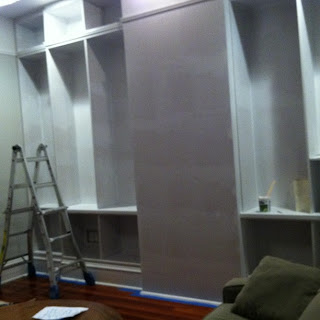 So it’s been pretty busy around these parts (and please forgive the instagram photo documentation).  Last weekend M headed up to Chicago to spend the weekend at the auto show with his dad – he took the train, so he managed just fine with one arm.  While he was gone the girls and I planned out our “girls only” weekend, but I told them that when it was naptime and bedtime that I had another project to focus on – bookshelves.  I really wanted to get them finished while he was gone (except for shelves, of course), and I did fairly well until I got to the top portion.  It was a bit too far a stretch for me, especially considering that I was the only adult on site – there was no need for an ambulance ride to the ER that weekend for another broken bone.  I had already finished priming the cabinets the week before – working some evenings – so I knew I had my work cut out for me.

But I did it – two full coats on the whole thing (except the top).  This weekend we rented a ten foot ladder to give me some extra height and stability up there to reach into the back of those upper boxes. 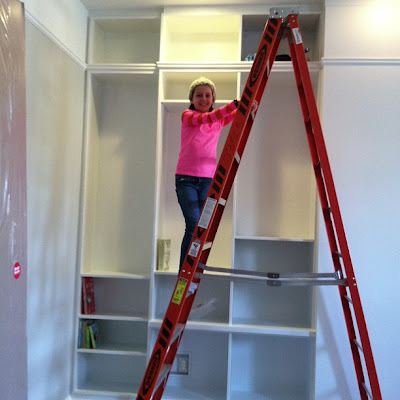 Man, I loved that ladder.  It was like working on scaffolding – it’s super wide and sturdy.  I did a moderate painting session on Saturday before we headed out to celebrate a belated Valentine’s Day.  I started staging the shelves (I think there are about 30 of them) on the kitchen and dining room tables. 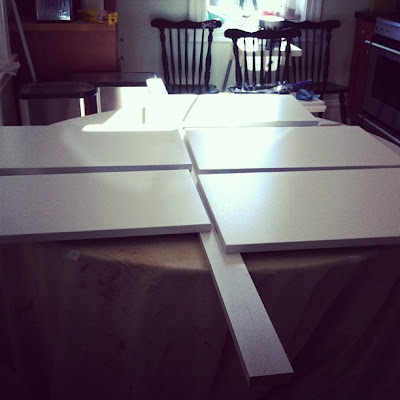 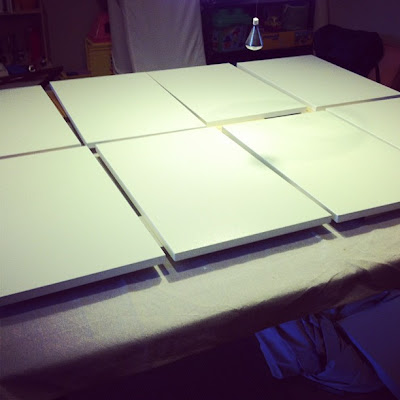 I promised I’d tell you about the new paint we are using, so here’s my unofficial report.  I’m sold on it, but there are a few disclaimers.  The back history here is that we had a paint rep from Porter PPG in to do a lunch seminar in my office on paints.  It was like a big chemistry lesson.  One of the products that she mentioned was a paint that Porter PPG had recently purchased.  It’s called Break-Through, and it was typically used in commercial applications where turn around time is critical.  You can see the little symbols at the top of the can – the stuff dries in 15 minutes, it cures hard and doesn’t stick – so you can paint a window and shut it and not worry about it permanently fusing shut.  You can paint shelves and stock them within the hour.  And,  (what I was most interested in) that hard cure means that things won’t stick to the surface down the line. 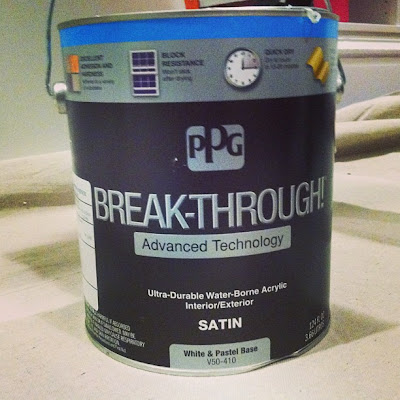 We have tons of painted shelves and surfaces in our house, and that’s always been an issue.  We’ve sort of solved the problem by applying three coats of clear poly over the finished surfaces.  That works, but here’s the thing:  it takes forever.  Painting multiple coats, waiting for them to properly dry in between (because it’s a mess and the paint doesn’t perform as well if you try to rush it), and then applying three more coats of poly and letting those properly cure before loading it up – it’s a neverending process, especially when you are trying to work all those painting sessions in around real life, not to mention having to clean everything up in between those sessions.

I will tell you that this paint is not easy to work with, nor is it for everyone.  You have to be prepared, and have a chunk of time to work, uninterrupted.  It dries fast, which means that you have to be systematic in your application and work in small sections.  You can’t cut everything in and then come back and roll the insides – you do both, back and forth.  This means that it worked great on those individual sections of the bookshelves – but not as great on that big expanse of blank wall in the center – you can still see brush strokes in the light.  The paint store owner recommended going at it with two people to get the paint on fast – you can’t fake it with a bigger roller or with more paint.
You also have to close the can well in between pouring it out in the tray, and you have to wash the tray after each session because the paint will give you those annoying floaters the next time you work with it.  It’s a hard cure, and so you want an even coat – no ridges at the edge, and watch the drips.  I found one drip that I need to sand and touch up.  And you need a good primer coat that is smooth because this paint doesn’t hide old sins.  We had to sand down some ridges, and you want a really well prepared surface before you start.
Oh, and did I mention the cost?  Yikes.  $90 a gallon, although I do have a trade discount card which knocks it down to $60, so in my opinion, it was totally worth it.  (One of the perks of being in the design field.)  We’ll use about a gallon and a half on the entire project – this stuff is thin and goes a long way – and we’ll use the rest of it coating some of the horizontal surfaces in the girls room.  Even at full price, I think it would be worth it.
So, pros and cons in front of you, it really is a break-through product to me.  It looks amazing, and so far it works like a dream.  The next best thing to a factory finish in a shop.
In other news, I’m working on a scale replica of the fireplace on foamcore, so I’ll show you what the whole thing looks like soon.  It’s going to take a few weeks to fill the shelves – we need to pull out lots of boxes from storage in the basement and on high shelves, and M’s still operating with one hand, so I guess you could say we are short handed around here. 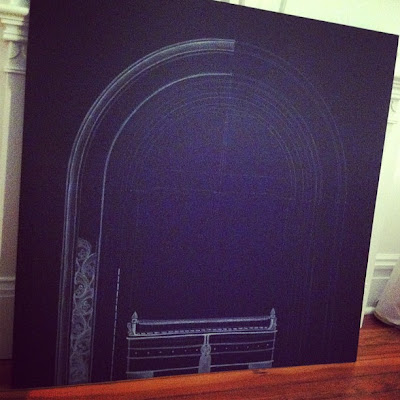 And I’ve got a few more rooms to share with you for lucky thirteen – we’re about halfway through, I think.