We’re currently celebrating our house’s thirteenth birthday (thirteen years with us) and its 128th birthday on this street.  To watch and read about the whole process in those early years (pre-blog), check out our rehab slide shows, nine of them, here.
…..
I’m about to open up the closet doors and reveal images that have never seen the light of day.  There may be a little shame involved.  There might be hoarder references.  I hope that you will be kind, and not judge us too harshly. 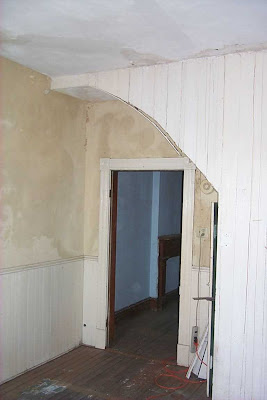 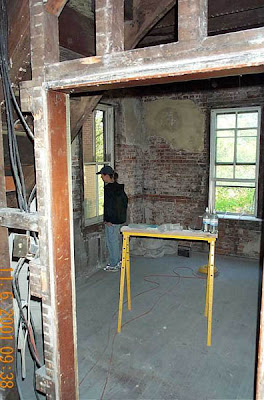 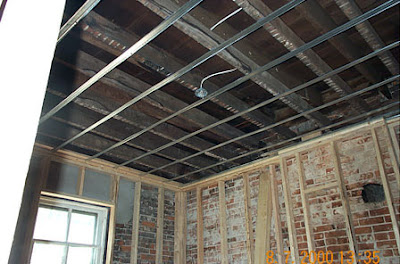 The back room.
This is the room that holds many names and none at all.  It’s been called a studio, a guest bedroom, a den, the “man room” (only by the one man that occasionally feels the need to escape all the women in the house), but mostly we just refer to it as the back room.  At the beginning of this journey it was the second kitchen – the upstairs unit’s kitchen.  It’s the room that suffered the most water damage in the years of house neglect before we swooped in.  It’s the room that we needed to finish just enough for it to qualify as a fourth bedroom when we closed out our construction loan and refinanced into a more standard mortgage.  And it’s the room that we didn’t immediately need to use and occupy – which means that without a purpose it became a sort of “Room of Requirement” for all you Harry Potter fans. 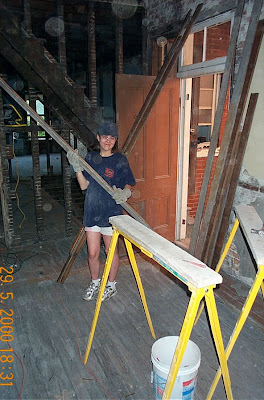 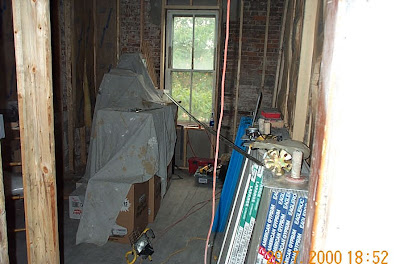 Don’t have a garage?  Don’t have a workroom?  Boom, there it was on the second floor, right in the middle of the action.  So it filled up with tools and sawhorses. 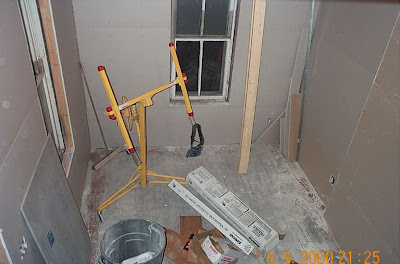 Don’t have a closet?  Don’t have a mud room?  Boom, there it was – a place to throw in all the moving boxes and the brooms and vacuums. 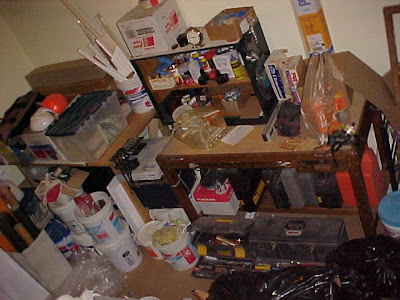 Don’t have an attic?  Basement still has a dirt floor? Boom, there it was – a place to store Christmas decorations, random home decor items and salvaged house pieces. 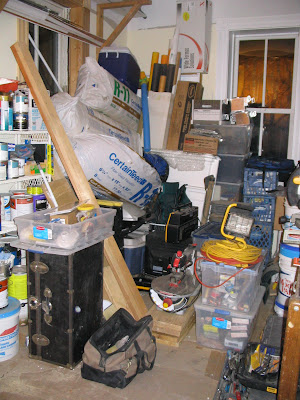 Luckily we could close the door and ignore it, but it was always there in our minds – and a constant source of shame.  How did we get so much crap?  (Just look back at the previous posts in this series and you’ll see – renovating a house produces a plethora of it.) 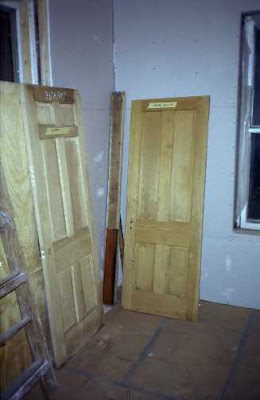 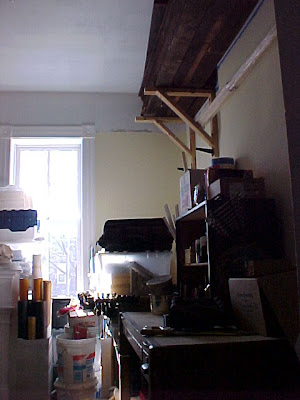 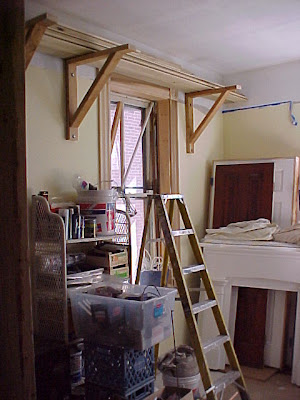 There were so many big steps required before we could even think about tackling this room.  First, we had to do an enormous amount of work in our basement (that’s a future post), so that we could move some storage down there and set up a proper workshop.  Then we had to slowly add in custom storage walls throughout the house so that we could store things like luggage and Christmas decorations.  We also had to finish up some projects so that we could toss the supplies and thin out the tools. 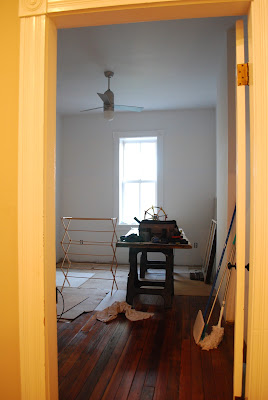 And we had to make some decisions about the space – and sometimes the decisions themselves are the hardest things to get rolling.
There was this cute little rear stair on one end of the room that went from the side balcony up to the attic.  This was because the attic was a shared space between the two units below, and so the access came from the outdoors.  Since we knew that we were going to eliminate the rear exterior stair and rebuild the second floor porch as a balcony, we always thought it would be fun to have a second little stair exit the third floor directly down to the balcony.  It seemed like a fun little secret tunnel from the kids’ rooms to the porch. 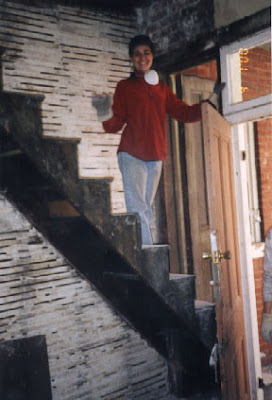 But the stair took up valuable real estate on the third floor and in this back room, and in the end, the charm of that stair was overridden by the practicality of having two rooms that function a lot better.  Now that F lives in that room with the former staircase, we are even more convinced that we made the right choice.  #escapeartist 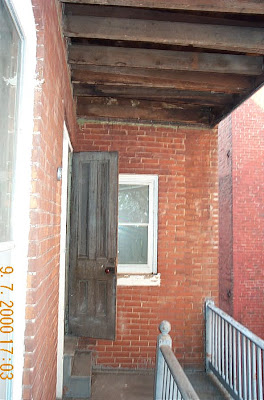 We took the stair out, and the awful wood structure that housed it above (more on that in the post about F’s attic bedroom).  M did a lot of rewiring to move and organize all of the transformers we had installed under the stair for the low voltage wiring in the main stairway. 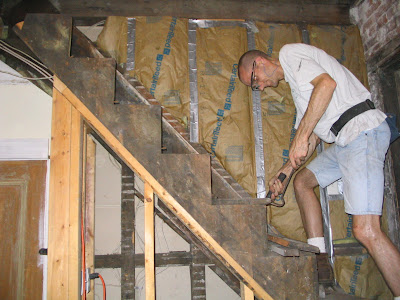 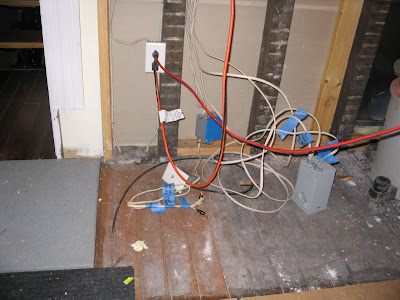 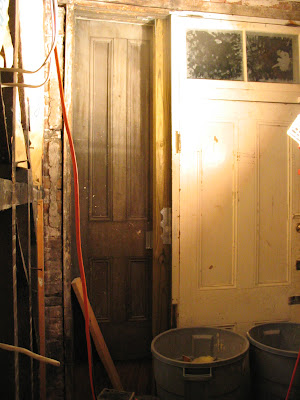 We started trimming out the openings in the room, and we’ve removed the window and door and transom for repair / replacement.  So they are currently just boarded up with plywood.  It’s a great look. 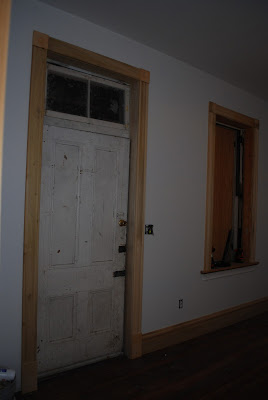 We have a temporary floor and temporary railings out on the balcony, but the idea is to finish this space off soon, and screen it in.  I can’t tell you how excited I am about this project – whenever it gets done.  I love being outside – reading and relaxing – but I hate mosquitoes and I hate bug spray.  I’m really looking forward to sitting out here on a nice spring morning, drinking a cup of coffee, and not having to smell like Deet at the same time.    Plus, the whole second floor is just going to feel so nice with that door and window thrown open to the fresh air.  The room isn’t large, but the balcony is a really nice bonus. 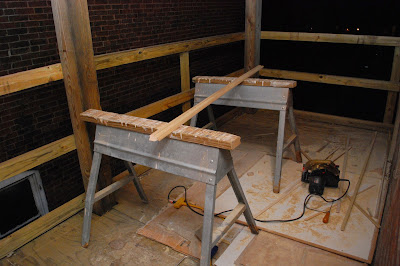 The back wall is full of open storage, and we’re slowly going through our collection of creative supplies and putting them on the shelves.  We have plans to extend the desk from wall to wall, and I’m hoping that’s the next project once the finishing touches are done in the living room (and the hubby has both hands functioning again).  We’ll move the computer out of our bedroom (angel choruses sing!) and I’ll have some room for a sewing machine to come out occasionally. 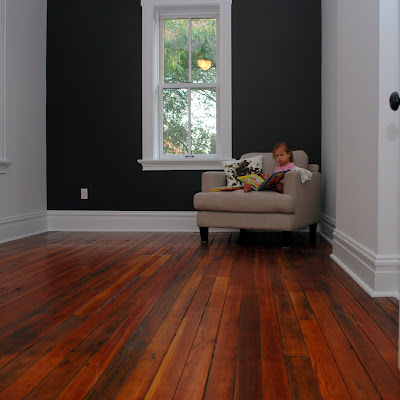 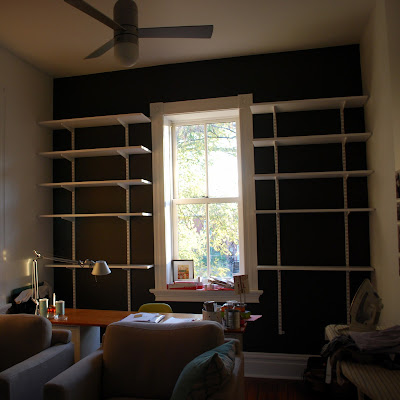 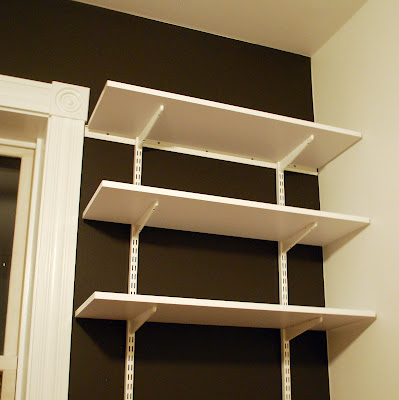 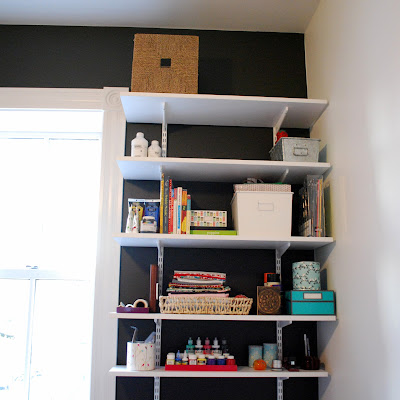 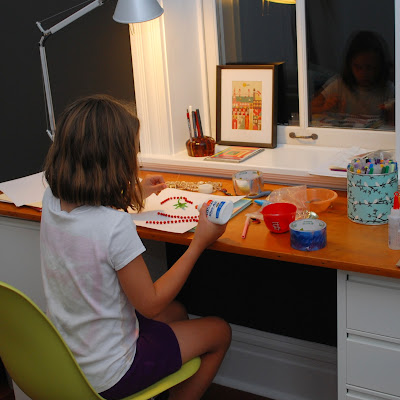 We’ve designed some built-ins that we’ll install sometime down the road.  And we kicked our only television set out of the main living area and it now lives in this room.  We certainly won’t be hosting any super bowl parties in this room anytime soon (it’s not large), but I love this location.

This is the view from the chairs to future wardrobes in the room.  You can see the staircase to the third floor through the door beyond.

And this is the view with the door closed and the TV cabinet open.  I’m not sure why I never built the exterior door and transom in the model – apparently it’s always seventy degrees and sunny on the balcony in my virtual world.
The older I get, the less I like having a television.  We use it primarily as a Netflix viewing station, and don’t have cable.  Several days go by without even turning it on, and that’s just fine with me.  Now that it’s up here, it feels like more of a Master Suite on the second floor – M will turn on Top Gear and watch it while he irons in the back room, and I’m hanging out in the bedroom.  There’s a natural progression that occurs in a vertical house like this – slowly moving downstairs in the mornings, and then slowly moving upstairs in the evenings.  It’s a different way of thinking, and it affects everything that we design and plan for – from book storage to shoe storage.  How do our days look and work?  How can our house help us create the family time and space that we need? 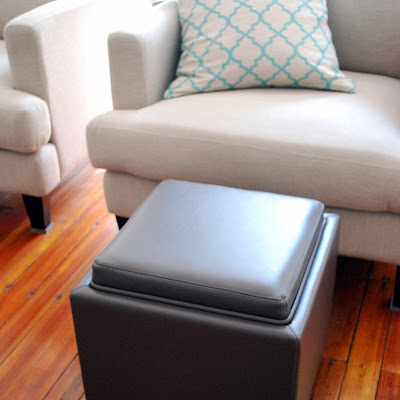 We’ve been slowly filling this room with inexpensive furniture as the budget allows.  The girls bring their beanbags down when it’s family movie night, or they just climb into the oversized chairs with us.  I want to put a nice area rug in (that’s the sample below) but M wants to carpet it with those tiles from wall to wall because the floor’s in such rough shape. 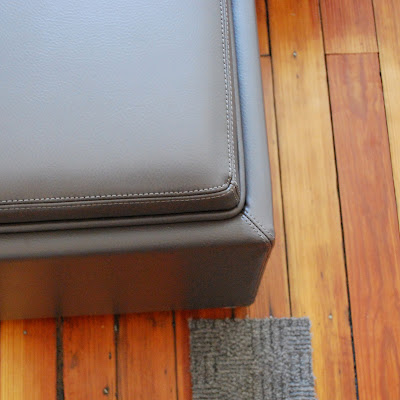 It’s always evolving, but this room is slowly getting there.  Just like the rest of the place, one piece at a time. 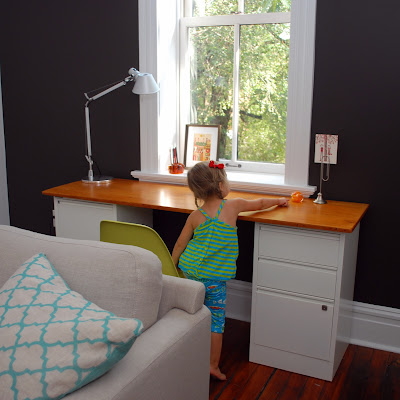 And man if it isn’t the most pleasant place to be on a sunny afternoon.  We’ll have those again, won’t we?

1 thought on “lucky thirteen: a love story and a "back room"”