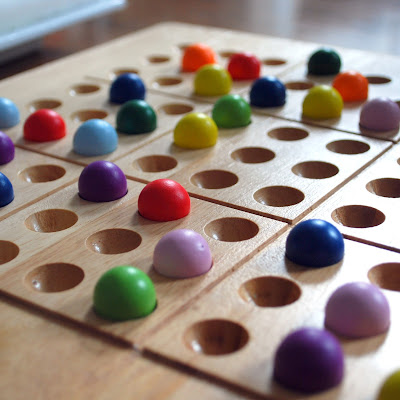 A few things you may not know:

1.  My favorite game to play is Colorku.  It’s like Sudoku with colors instead of numbers, and a board instead of paper.
2.  My favorite reason it’s my favorite game to play (in this form) is because it can be played by more than one person at a time.  You can collectively work towards a solution.
3.  My favorite person to play this game with is E.  We pull the board out quite often, always after her sister is in bed, and we take the next card out of the box and set up the board for play.  Each round gets a bit harder.  Some games take a half hour or longer.  It’s quiet, and we concentrate.  It stretches my brain, and the wooden marbles feel good in my hand.  I get to marvel at how smart she is, and revel in the fact that she loves to hang out with me in this way.
4.  If I had to list my favorite moments in this life, playing a round of this game with her would be on it.
5.  E and her Dad love to watch Cake Boss shows on Netflix.
I promise these are related.
It’s Sunday afternoon, and F’s up from her nap and the rest of us are in the living room talking about furniture layouts and plotting out our next project.  E asks if I want to play Colorku, and I say yes, of course.  E tells me her feet are cold, and asks me if I’d get her some socks upstairs.  They are all picking up things, tidying up a bit, and I get the sense that something is about to happen.  This is not a stretch for my imagination – they’ve been holed up in the kitchen for a good part of the weekend, and the blanket is back up over the kitchen doorway.  E tells me to take my time, and so I go upstairs to switch the laundry over.  I forget about the socks.
When I come back downstairs, they are all in the living room and I see a vase of flowers and my favorite Jeni’s ice cream pint, and the Colorku game set out, ready for play. 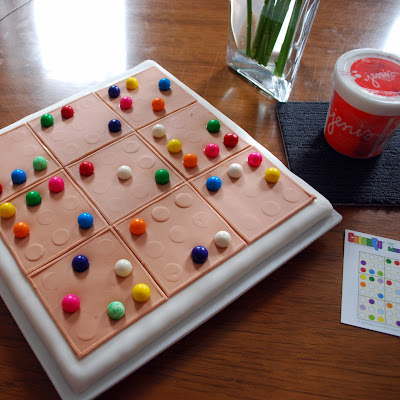 I thank them for the flowers and the ice cream, and I think that we’re going to all play a round together – you know, a family round of my favorite game – and then I do a double take.  Because the game board is a cake. 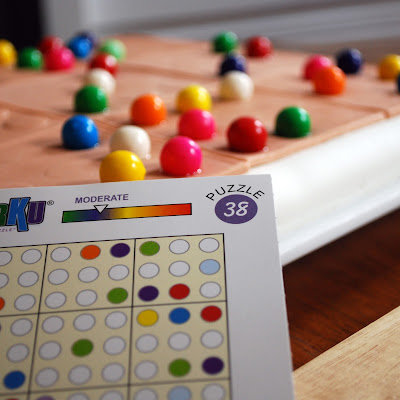 Thirty-eight.  (Gumballs instead of candles).

Now it’s later, and I’m looking at the photos on my camera, and I see them making the cake (from the Cake Boss recipe!)… 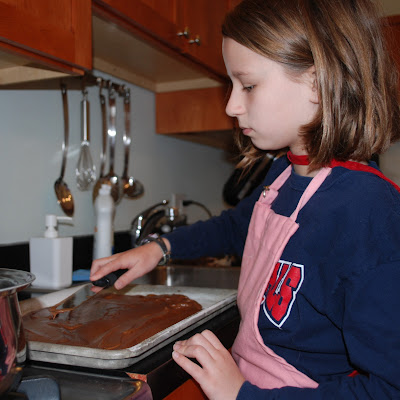 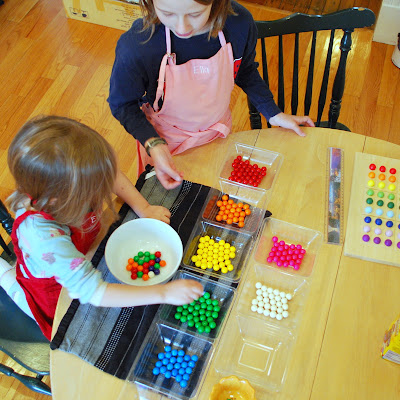 …and there seems to be a fair amount of icing sampling.  E “dirty ices” the cake… 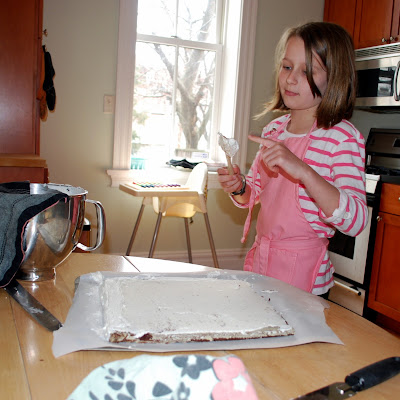 …and then gets to working on the fondant.  I saw the ruler out in several of the photos, and the stacks of perfectly cut squares.  I asked her how she made the indentations and she told me they used the game board itself to do it. 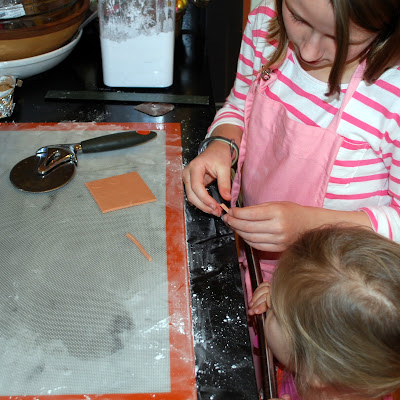 She stretched black thread in an ‘x’ across the plate to find the center, and then she carefully laid out each tile. 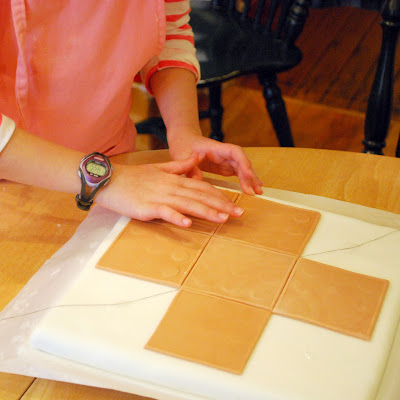 Apparently they searched for a card with thirty-eight marbles on it, but only found thirty-seven so they added one more to the cake.  Still – you could solve this one if you wanted to.  She “glued” the balls onto the cake with a little corn syrup, and pressed them in enough that they look like they are resting in holes on the board. 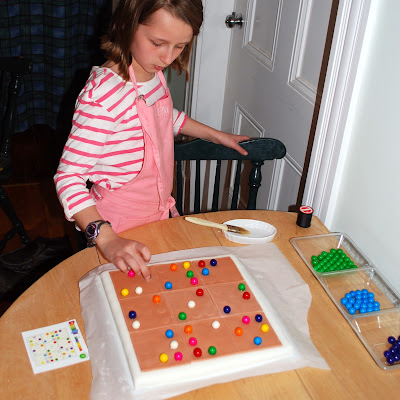 Then they squirreled it away in the fridge and wouldn’t let me near it. 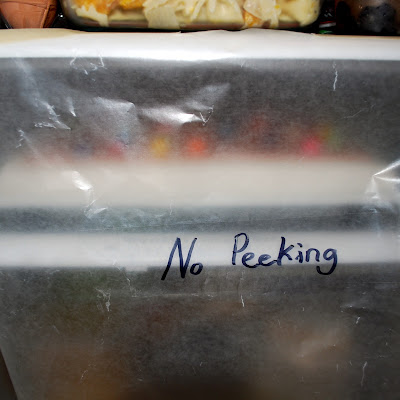 It’s awesome.  The best cake ever. 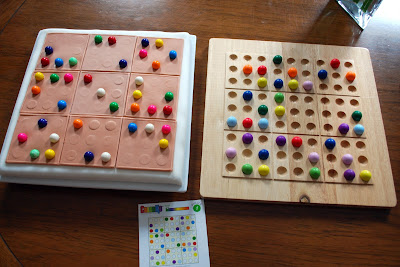 I can’t believe she thought of this idea in January, and carried it out in April.  I can’t believe the little one kept the secret, only telling me a few times that they “most certainly were not working on any surprises for my birthday, they were only making bread and water.” 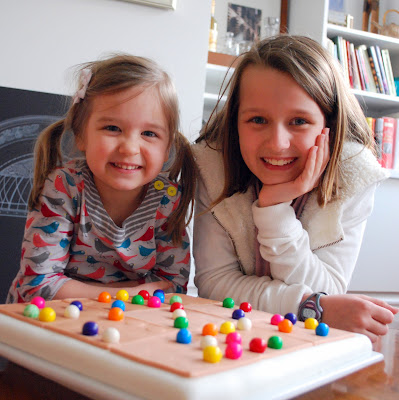 I can’t believe their dad said “You want to make a Colorku board out of cake and icing and fondant?  Sure, why not?” and then made countless trips to pick up just the right ingredients for the job.  I can’t believe that when they realized they didn’t have a light green gumball to match the light green marbles, they all collectively sucked on the dark green balls for just the right amount of time to make them light.

Okay, I can totally and completely believe that last one. 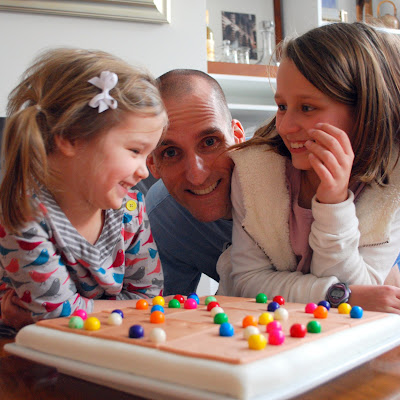 Actually, I can believe it all.  This is why I’m a lucky, lucky gal.  I’ve always thought the best part of birthdays was finding something meaningful and worth celebrating about someone and then running with it.  Seeing that kid get it – and everybody run with it – is really the best gift of all.

8 thoughts on “a lot of marbles”