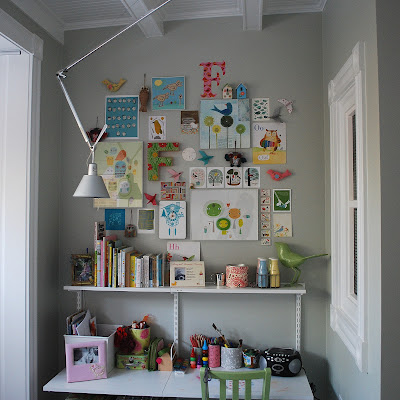 Little projects can be really, really aggravating.
When I mentioned the act of shifting a few weeks ago, one of the real time examples of shifting going on in our house was in F’s room.  This wall may be the death of us.  First it was a computer station in the studio.  Then it was a nursery wall with magnetic paint under the wall paint so that we could shift artwork around above the desk – we just added magnetic tape on cards and drawings, etc.  Then the magnetic paint created this impermeable barrier between indoors and outdoors, and that – coupled with a southwest corner wall needing tuckpointing and an old roof needing replacing (both of those are happily off the list now) – meant that the heat and humidity in the wall really built up and the wall didn’t breathe at all, so the drywall disintegrated and the only thing holding the desk and the artwork up was – I swear – magnetic paint.  I apologize for the previous run on sentence, but I just wanted to spit it all out and be done with it.
We stripped the wall, we fixed the wall, we painted the wall.  (Honestly – if you look at that last link, the post was titled “second times a charm.”  Ha.  But for some reason – in some places – you could see the green of the moisture resistant drywall showing through the paint after awhile.  We might have used old primer or not painted the wall well enough.  Regardless, it bugged me.
So we shifted everything off the wall and re-primed, re-caulked and re-painted.
[M just walked into the room behind me and said “Are you blogging about that wall again? Get some new content, lady.  Linking to old content is not new content.”  He is right.]
But that’s sort of the point.  It’s not all glamorous-never-before-seen-before-and-afters around here.  It’s just a Thursday night with a caulk gun, a Friday night with a paint brush, a Saturday morning with a screwdriver and a vacuum, and a Sunday afternoon with a hammer and some museum putty.  This time I didn’t even think about the layout.  I just started hanging pieces up, stepping back and hanging some more.  I love this wall, and all the little stories behind those things that hang on it. 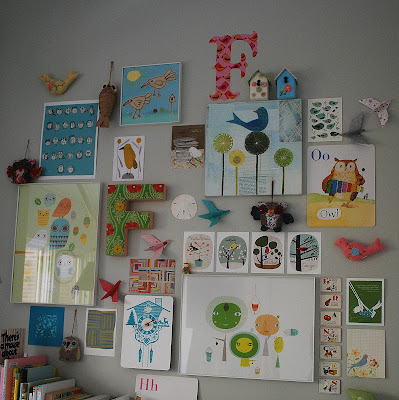 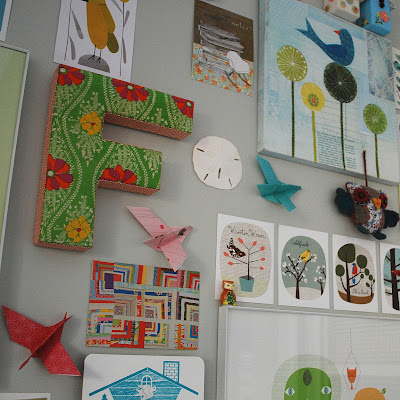 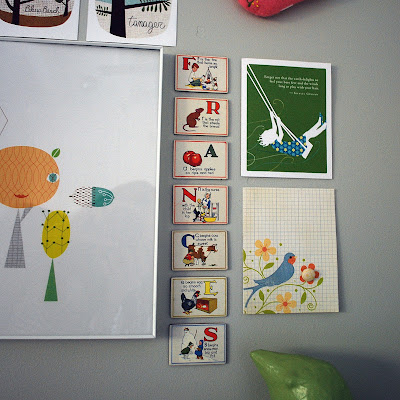 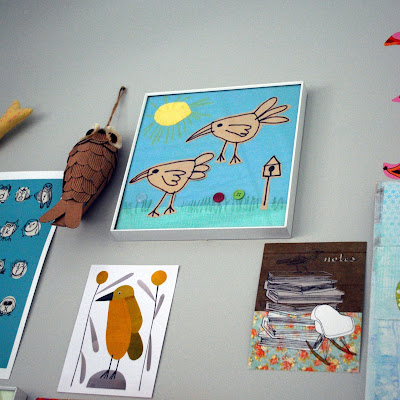 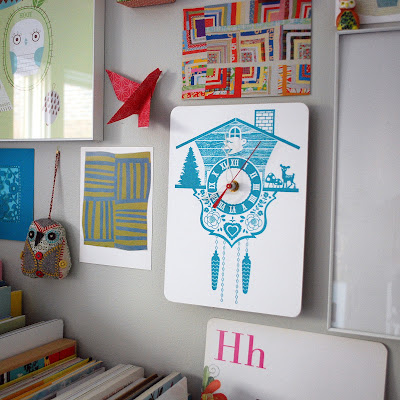 I fully expect to have to deal with this wall again at some point – the renovation gods seem to like this corner of the house.  But at least for now it’s done – everything is shifted back into place and F is once again at her desk – playing DJ with her CD’s and watercoloring up a storm.