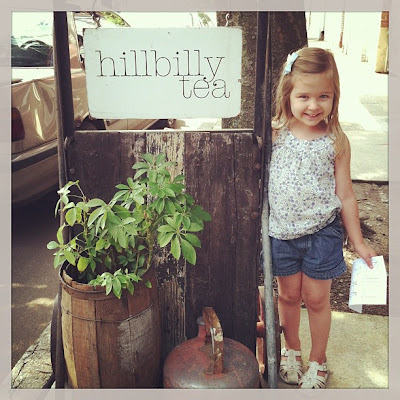 Last weekend we spent some time with family, attended a wedding and relaxed in general.  Oh yeah, and watched the rain.  It rained non-stop the entire time we were there – except for this gorgeous double rainbow that filled the sky at sunset during dinner Saturday night – M got this photo from our dinner table. 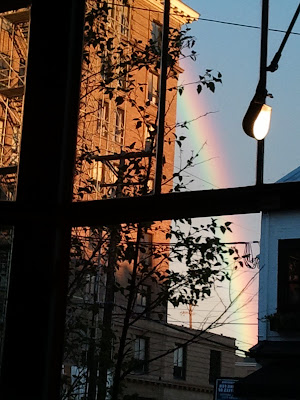 So when we headed out the door Sunday morning on our way back home, we were delighted to see the sun break through the clouds about ten minutes out of town.
There’s a severe lack of anything remotely decent to eat on the journey between my home state and my current state.  Once you pass Louisville, it’s just fast food joints, and not even a big variety of those.  We used to be able to make the trip between meals, but with kids it’s hard to stretch them out much more than five hours – even with snacks in the car.  We’ve tried a handful of non-chain restaurants over the years – even if it means we have to drive a couple more miles off the highway to do it.  Sometimes we even tag on some good restaurant stops at the end of our trip, in places we don’t frequent as often as we should, like Peel in Edwardsville.  But it was Sunday morning, and we were an hour into the trip and it was nearing an early lunch time.  Time to pull out that recommendation from a friend a few months back.
We stopped at Hillbilly Tea, and I described it on Instagram as a hipster-vegan-hillbilly joint.  It was completely enjoyable, and such a welcome spot to spend a sun drenched morning.  It’s just a few blocks off the highway, and it was full, but we still managed to snag a seat after about ten minutes – long enough to make a quick restroom break and sit for a spell (outside a car seat). 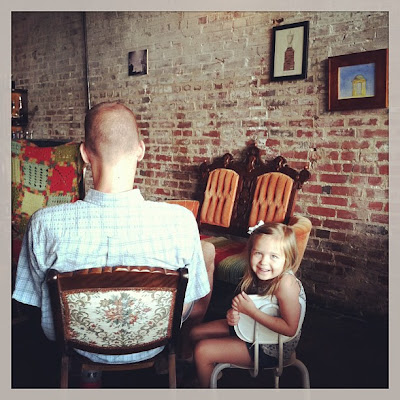 Everything really centers around tea, and they have tons of it, plus several iced tea options for dining in.  We drank tea in a sunny window seat and tried to decide what to order. 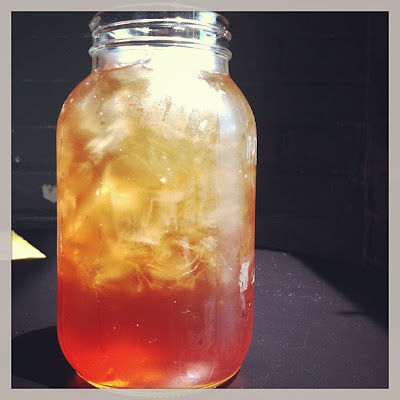 In the end we ordered a bunch of things to share – the vegan scramble that was delicious – with summer squashes inside.  French toast that was actually more of a grilled corn bread, but less bread, more corn – kind of like spoonbread (if you’ve spent much time in Kentucky).  The french toast had a green tea syrup and green whipped cream, absolutely delicious.  We got a side plate of Bourbon County sausage, and a big biscuit with honey, and fruit. 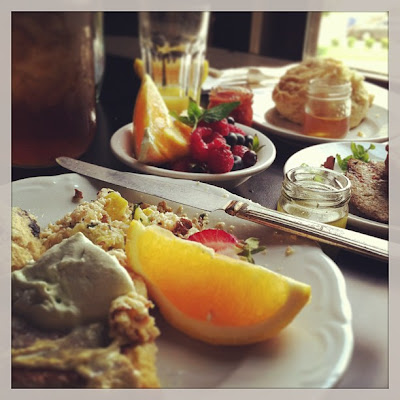 We ate every last drop. 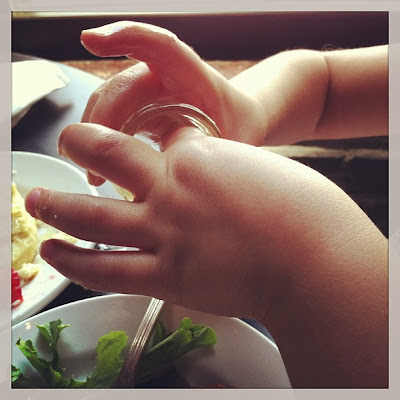 Hillbilly Tea, Downtown Louisville – perfect for meat lovers and vegetarians / vegans alike, and delightful for brunch.
The night before M and I went out with my sister and brother-in-law to table three ten in downtown Lexington.  It was a late dinner, and a bit dark for any good food photos, but the food was really delicious.  This was the night where the gray skies broke apart briefly and the sunset lit up the surrounding buildings, and the double rainbow appeared.  Those big glass windows were all open, and the temperature was absolutely perfect.  We had so much fun sitting and talking and eating and eating and eating. 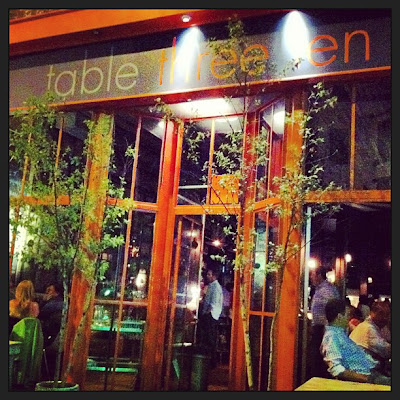 On Friday my parents were busy with the rehearsal dinner for the wedding I mentioned, and my sister’s family was still in route back from vacation, so the four of us were on our own for a spell.  We ate lunch with my grandfather and aunt, 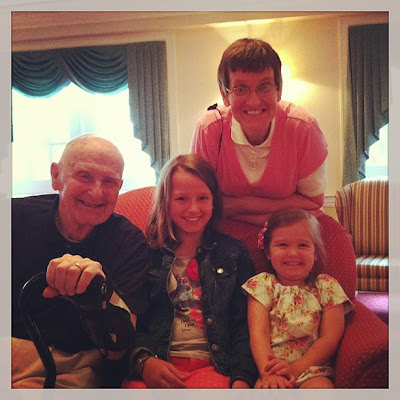 and then we headed over to Graeter’s for some ice cream dessert.  I have a hard time getting anything other than mocha chip, but M got the seasonal peach and it was amazing.  The stuff is good.  Or irresistible, I guess. 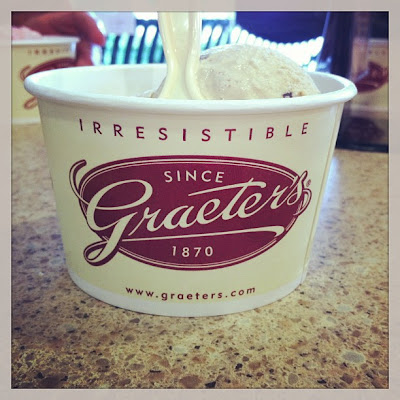 Later that evening, we ventured over to Midway, and ate dinner at Gray Goose.  I like their super thin pizzas – this time I had the Hot Brown pizza – and everything we had was good.  I wouldn’t call the place blow you away spectacular, but it’s a comfortable space to eat in, with the big doors thrown wide and the patio full of brave eaters under the umbrellas.  And the town is so cute and quaint, it’s just fun to hang out in. 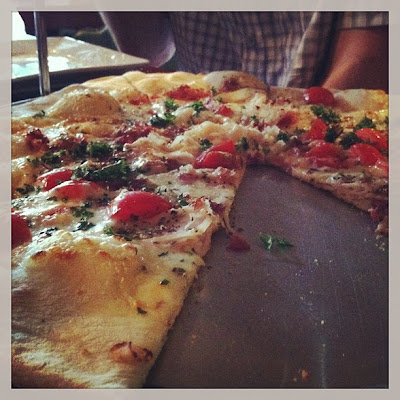 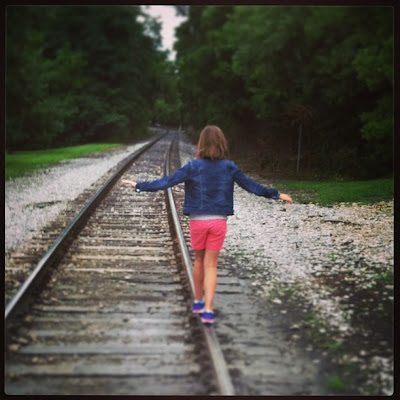 We roamed around for awhile, and along the tracks, and then we drove a couple miles down the road to Wallace Station to pick up dessert.
Hands down, E got the best choice of the bunch – the oversized s’more bar.  But F gets the prize for most original.  Her corn on the cob cookie was like biting into a tub of the best movie popcorn, in a cookie form.  Here’s to weekends of delicious local food. 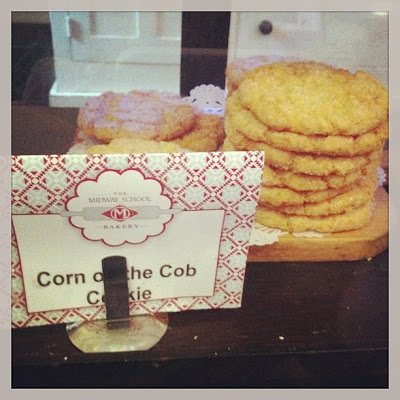 2 thoughts on “where we’ve been eating”