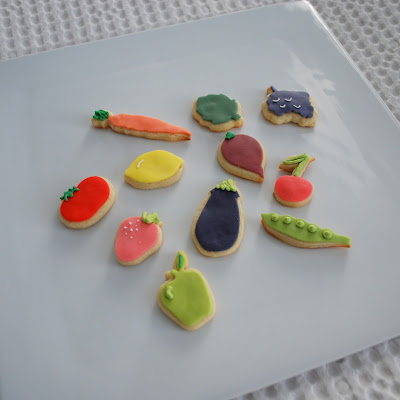 I’ve made a lot of different cookies over the years, but these might just be my favorites. There’s something really fun about little cookies – and lots of them. And something even more fun about another kind of food in cookie form.
I bought a set of fruit and a set of vegetable cutters, and I ended up using eleven of the twelve shapes – I just couldn’t get into the pineapple shape – too tropical for any farmers market around here. You don’t find a ton of lemons either, but I needed the yellow for the rainbow spectrum, so I kept it in. One that would have been fun would have been corn. I could probably have make the pea pod look like corn if I had thought of it earlier. 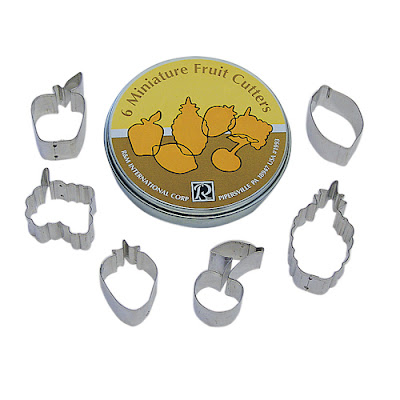 I had several berry baskets full of cookies, and by the end of the party they were pretty much gone. There’s nothing better than a bite sized cookie – and the kids really found them irresistible – searching around for their favorite foods.
I also filled eighteen little market bags with a complete set of the cookies, and all the kids got to take one home. 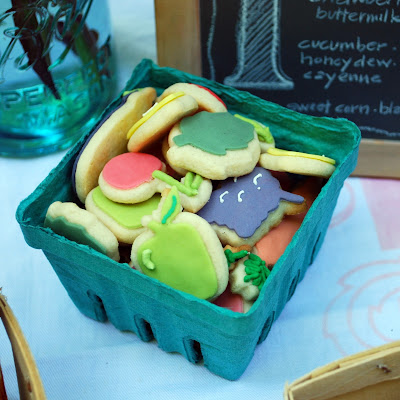 When I made the rainbow cookies a few weeks back I made two recipes of the dough and used the extra to start cutting and baking these shapes.  I froze those, and last Monday night I made one more batch to finish out my count.  I needed to fill the eighteen bags, plus have enough for the table and for a few out of town family members that couldn’t make it to the party.  So I decided on twenty-four of each type. Once they were baked I had them all stacked in my oversize cupcake container.  I posted a photo on Instagram, and one friend commented that she was overwhelmed by the icing in my future.  Funny thing was, I thought that same thing too as soon as I snapped this shot.  It was Tuesday night, late, and I was wondering how I was going to get it all done. 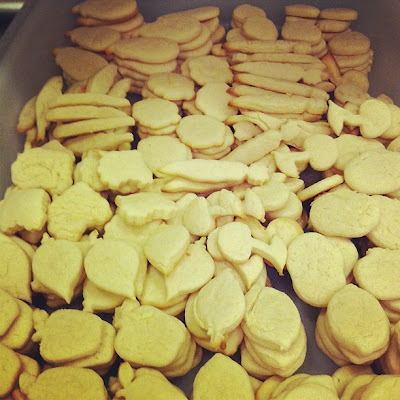 Wednesday night at 8:30 I started on the base colors, and four hours later they were all done.  I do my best not to do the math in the middle of the process, but it doesn’t take a math whiz to multiply eleven and twenty-four.
Thursday night I made a batch of icing and divided it into three bags – white, light green and dark green.  Then I went to town on the stems and leaves, and little peas and white highlights on all the fruit.  By eleven I was done, and they were layered into a container, ready for filling up little cellophane bags. 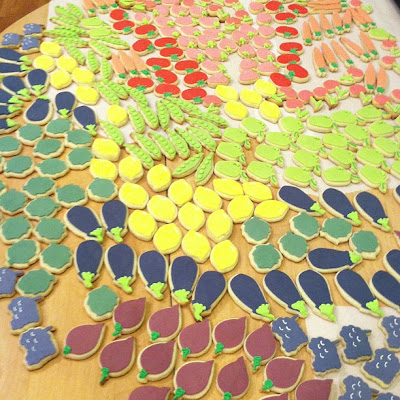 I think the peas were my favorite.  I started with the pinks and reds and worked my way through the rainbow.  I opted for a granny smith colored apple since I had a lot of reds and pinks with the tomatoes and the cherries and the strawberries.  When I got into the blues and purples – the grapes and eggplants and beets? radishes? (I’m not quite sure, actually) the table just looked so colorful and happy that I forgot about how much my foot hurt and how tired I was. 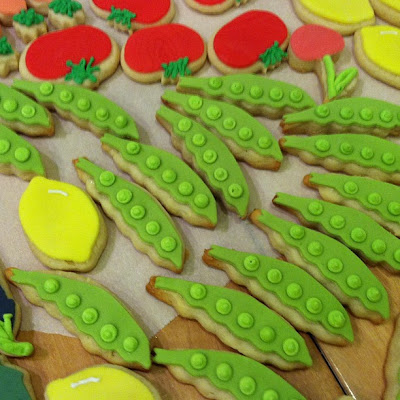 It was probably a good thing to be sitting for a few nights in a row. That meant that the entire house had to be cleaned by M while I did, but it was a good way to divide and conquer the work. I had been standing for so many nights in a row – baking and making ice creams – that it was kind of nice to sit and work for a change.
Speaking of divide and conquer – I also opted to divide the birthday tasks between homemade and store bought. I’ll be the first to admit that I can go a little overboard on the homemade cookies (and this year, the ice creams), but I love it, and look forward to it each year. I also know my limits, and as far out as those limits might seem, I still know them. I bought a delicious cake from Whole Foods, and I added a set of the cookies to the top, as well as her name in pea pod green, and a beeswax “four” candle. I also made three recipes of muffins for the party – forgoing my favorite scratch made muffins for ready-made mixes – blueberry, lemon poppy seed and corn. I did just fine with the first two, but the third one was a bomb, and I tossed them. I do wish I had stuck to my favorite America’s Test Kitchen corn muffin recipe – it’s honestly not much harder, and so delicious. But we survived without them, and no one but the trash can was any the wiser. 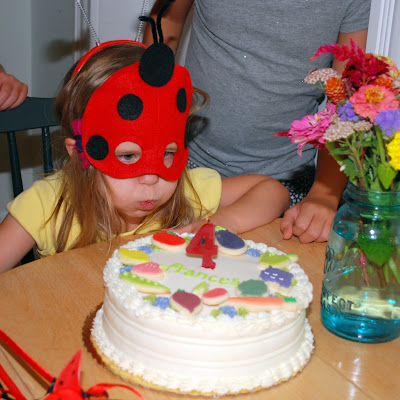 I’m hoping for another excuse to make these cookies again – maybe a friend will throw another farmers market party, or an eat-your-fruits-and-vegetables party.  They’d look pretty sweet as cupcake toppers too, perfect for a summer birthday.  The apples would also look cute iced in all the different apple shades for a fall party at the orchard.  Too many fun ideas, too little time. 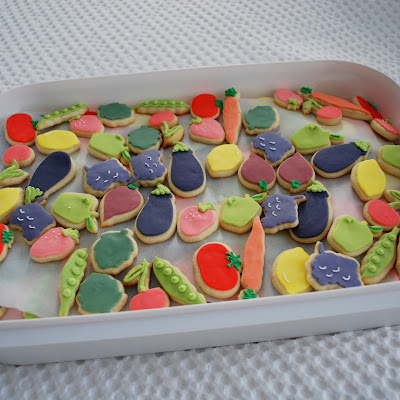