Several months ago I sold several items via Craigslist – my first foray into that grid view world of stuff one no longer wants. A couple of weeks ago I bought my first item via Craigslist. Since then I’ve been trying to formulate a post in my head of my observations (many bothersome and some disturbing) with the process – while also sharing with you what I consider a tremendous score that is currently gracing my living room, and that might one day be reconfigured into another thing that will reside in a corner of my dream kitchen (quite the opposite of bothersome and disturbing).

The two facets of this conversation are entirely independent – the vehicle that is essentially yard sale-ing online is the only connecting point here. The bothersome aspects of the process do not detract one bit from the joy derived from finding new homes for furniture items that we no longer need, nor do they detract one bit from the lovely nature of my new marble coffee table, which might one day (when married to just the right thrifted table base) become the tulip table-like dining spot in my lovely sunlit kitchen dreams. 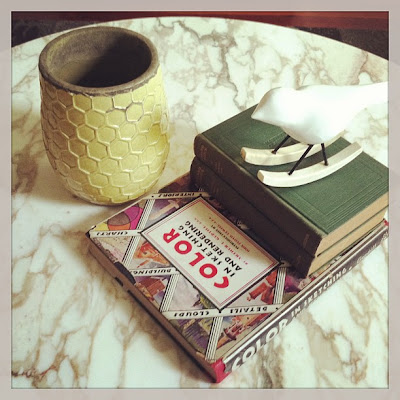 The marble top was purchased in Italy fifty years ago by the lady selling it and her (I’m assuming, late) husband, when he was stationed in Munich. They carried it back to Munich in their Volkswagen and then later shipped it back to the US when they returned. They had a custom base made for it – which is also very cool looking – but her house was on the market and it seemed like she was downsizing and needed to part with some furniture. I was very happy to take it off her hands for a song, knowing full well that marble that size and thickness would cost much, much more. For now it works well in the living room since it’s over a foot smaller in diameter than the former one, which means you can now get your legs between the table and the chairs and couch. It’s not the marble hex tables that we wanted from West Elm – but those jumped in price just as we thought we might buy a few – and we needed at least four for the layout we liked. I still like the idea of a set of smaller tables that move around more easily, but for now this looks great in there, and I love the possibility of making a small dining table out of it one day.

I have lived in this city for over fifteen years now. I have never lived outside of the city limits, and we tend to operate within a fairly short radius of our home. We have friends that live all over the place, and I’ve worked on projects in many of the far flung suburbs, so there are few places in the metropolitan area that we haven’t driven through. But still, we are city folk, and we work, play, eat, school and shop here the most.

The woman who listed the marble coffee table was not the seller of the table – it was her real estate agent. When I called to inquire about it, we had a brief conversation. I told her I was interested, and I asked if I could come pick it up on a Saturday morning. She asked where I lived and I told her. She said she would call the owner and get back to me.

She called me a few moments later, and we talked for much longer this time. Could I come at nine? Did I have the means to carry the heavy slab, and to transport it that morning? And could I tell her one more time where I lived? She was a real estate agent, but she had never heard of my neighborhood. I mentioned the expensive restaurant around the corner that even the most city-shy will venture in for, and she knew immediately where I was from. And then there was a pause, and then the questions. Did I like living there? Was it safe? Wherever did my children go to school?

She told me she had grown up in the city in the fifties, but high-tailed it out of there. Her daughter has young children and would like to move back, but she tells her she is crazy. She asks if I can find this particular suburb and neighborhood where the table is sitting, an affluent one, if you haven’t guessed by now. I assured her that I knew the region fairly well, and what I didn’t know, my phone could surely guide me to. I laughed that I rarely ventured out much past the first inner ring highway. She laughed and said that was funny, because she rarely ventures much past it either, from her direction.

I am bothered by her lack of knowledge of the region that she presents to new arrivals here, those who are looking for a home to buy; I’m more bothered that she writes an entire portion of it off. I am aware that I am making more small talk than necessary in order to convince her that despite my address, I’m a legitimate customer for this table. That Saturday morning we notice all the neighbors are strategically stationed in their driveways, watching us. I understand the need for caution – we are strangers and the seller is older. I am aware that once they see me, they are reassured by my appearance and relax their stance and retreat a few steps. I am aware of the injustice of that, even if I benefit from it.

A few of the items we sold on Craigslist (like our strollers and our couch) were bought by people living in nearby neighborhoods. But everything else we sold went to people who lived beyond the suburbs – the ex-urbs in fact. Our interactions were always the same.

They would ask for the address / neighborhood.

They would not be familiar with the neighborhood until I pointed out nearby landmarks.

We would arrange a time for them to stop by, and then we would watch for them because our house has a side entrance, and it’s a little hard to locate on the first drive by.

I quickly learned to walk outside and wave, because they would seem nervous to get out, unsure of where they were.

A huge look of relief would wash over their face when they saw a seemingly normal looking person waving to them. Their wariness would disappear, and they would willingly come right into the house with me.

Every single conversation would begin like this: Wow, what a gorgeous room. Your house is beautiful. I love old homes. Did you do all the work yourselves?

Sometimes, if it was two people – they would comment to each other about how they’ve always thought it would be fun to renovate an older home. And then some more about charm, and brick and slate.

But here is the bothersome part, the part that has been lingering in the back of my mind for months now. I wish I had a better way to say this – to explain its impact on my thinking and my feelings about so many things in the meantime, but I don’t. Our Craiglist experiences started to feel like some sort of social experiment we were conducting.

If the street was quiet and all our neighbors were indoors, then the conversation would quickly turn to the object at hand. The buyer would inspect it, tell us a little about how they were planning to use it, and then happily hand over a folded up stack of bills in exchange for our wares.

If the street was not empty – if our next door neighbors were moving from car to house with groceries, if their sixth and third grade boys were in the front yard with their new puppy, or riding scooters up and down the sidewalk, in front of our house and theirs, then every single conversation eventually led to these questions in our living room: Do you feel safe here? Is this street safe? Is this a safe neighborhood? Their unease would return as I escorted them (safely) to their cars where they could quickly speed off to their homes again.

And that is where the experiment kicked in – before each prospective customer came by, we could look out onto our street, see who was out and who was not, and predict the conversation we would have with someone who spends little time within the borders of the city. Sadly, we were right, every time.

Do I need to explain who my neighbors are? Can you guess? What their boys look like, outside of the description of elementary aged boys?

I will guess that no, I don’t need to, and that bothers me even more.

Can I tell you about my street, about the people that live on it?

A middle aged single white man who drives a semi and hardly ever wears a shirt, along with his nephew, his wife and two baby girls. He grew up in the house and started living there after his mother died about seven years ago. She always left a card for E on the porch for her birthday, before she passed away. A black grandmother who lives on the first floor and her daughter with her two sons, plus her female partner on the second floor. The grandmother runs a tight ship in the front yard when she’s home, which isn’t often since she works two jobs. I think the daughter does as well. They barbecue together every Sunday afternoon. A gay white man, the only person on our block who has managed to maintain a front lawn that looks more like a putting green than a clover patch, and the new family that moved in next to him with two small blond headed children. A middle aged couple with several dogs and several stickers about their dogs on their cars. A retired fireman who lost his girlfriend years ago to cancer, just after losing two fellow fireman from his station in a tremendous chemical fire at the end of our street maybe a decade ago. I watched him the morning after that fire, sitting on his front steps, sobbing. A new couple that just had a baby shower with blue ribbons and blue balloons, a single guy with a big dog with big poops plus a house covered with lawn ornaments and trinkets attached directly to the walls.  The organist at our church. Our babysitter and her chickens. The owner and the staff of the deli who arrive each morning at the exact time I’m driving my kids to school – just in time to wave hello. There are children and babies all over the place, all with names that we laugh about because they sound like names from fifty, sixty, seventy years ago. Blues lovers, hipsters (oh my, so many), architects. Boys in school uniforms on street corners at ungodly hours of the morning, waiting to be bused to far away districts. Families walking their kids to the school down the street. The older lady who putters around in her garden and always forgets that she talked to me last week, and asks me if I’m new to the neighborhood over and over again. She writes anti-war statements on white poster board with markers that stream when they get wet. A couple we rarely ever see because they have one of the only attached garages in the neighborhood – and they use it.

I do not know what else to do but to tell you the story of this, and ask you to listen before you assume.

8 thoughts on “craigslist (and stories about assumptions)”