scenes from a weekend 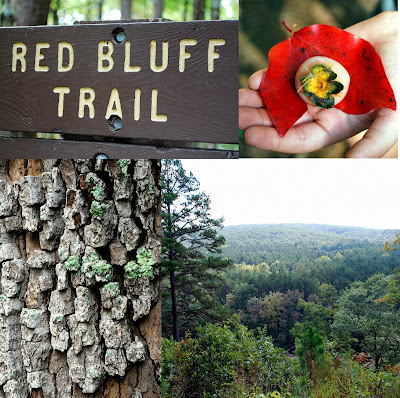 We’ve been lucky these last few years of fall camping. The weather, the location, the company, the food. This year wasn’t any different – even if you count the all night rain Saturday night – it started at the close of our group dinner (chicken curry, rice, naan, roasted vegetables, cucumber salad) and tapered off before the first riser the next morning. 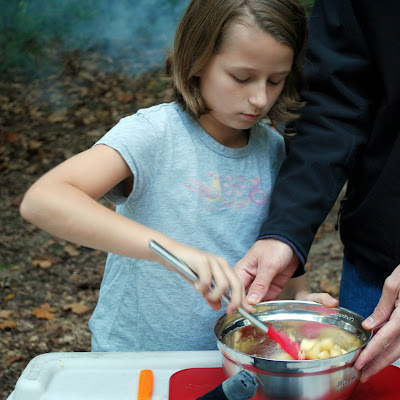 Saturday was warm – more like early September than late September – and our campsite was just a few steps up from the water. 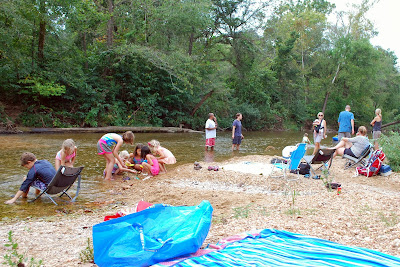 We had the place to ourselves. It was shallow, clean and clear, and the kids took turns in the kayak, floating around the area.
The little one enjoyed the pushes. 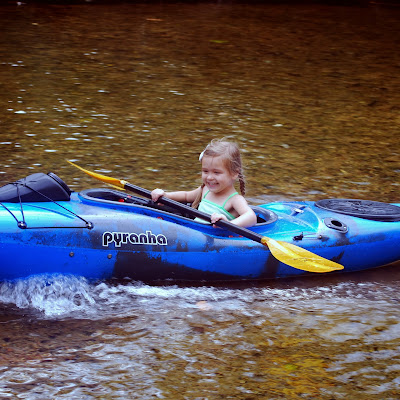 The rest of the time was spent creating micro habitats along the rocky shoreline for the dozens of tadpoles (and the occasional crayfish) that they caught. 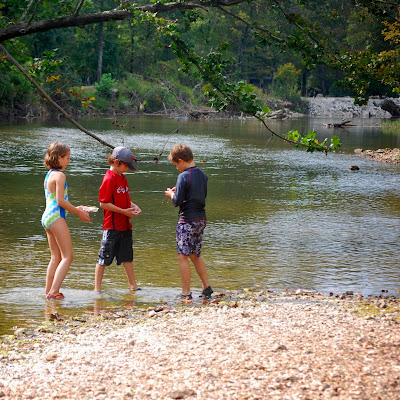 Earlier in the morning the group went on a hike, stretching out along the path, kids and grownups in a line. 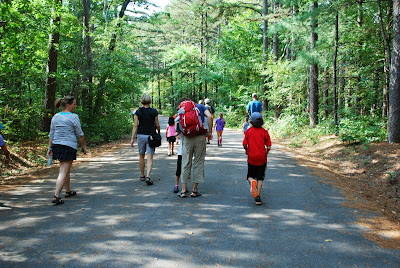 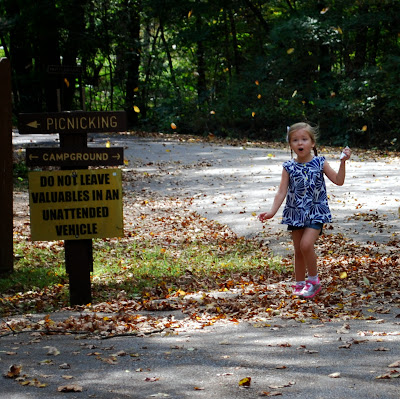 The leaves were just starting to turn, and some bright reds one were scattered along the path like sign posts. The little ones looked for sparkling fairy gold and came down with heavy pockets of precious rocks. 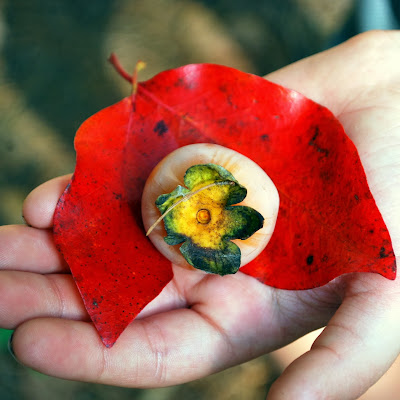 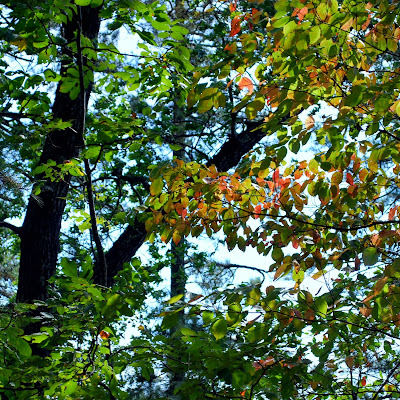 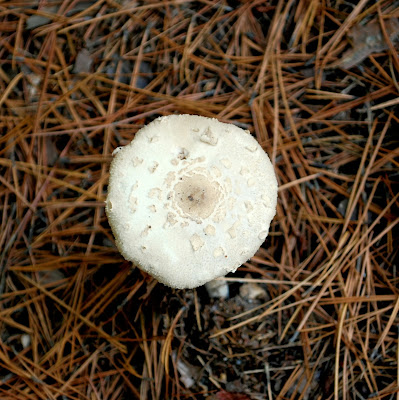 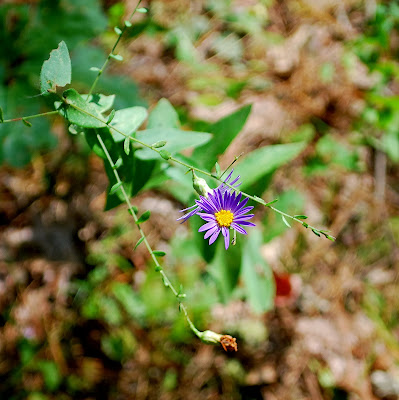 We found the most gorgeous campsite we’d ever seen – a quiet little spot right on the edge of this incredible overlook. No one was around so we clambered through to enjoy the view. Everyone loved this little pop up trailer with the sleeping window looking out over the bluffs. 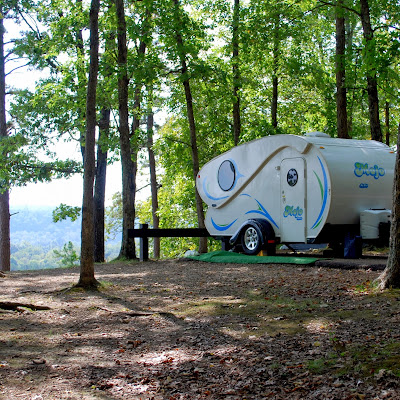 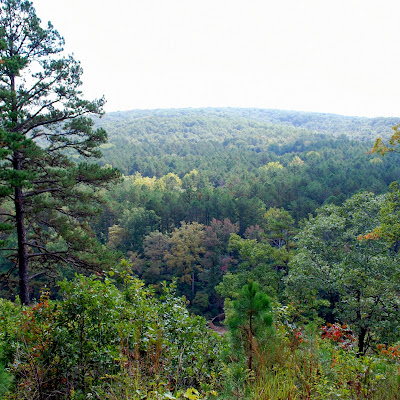 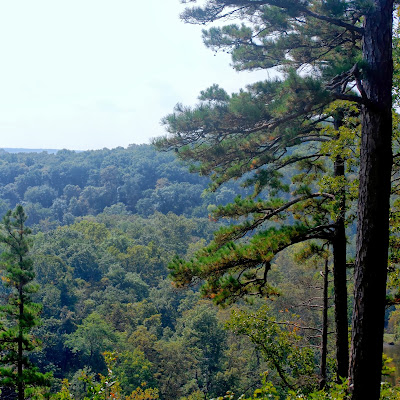 We all agreed that it would a great spot to come back to… in several years time. We surely would have lost a kid or two in the campfire evening, over the edge. There was a definite “grown up” feeling to the site. Come in, set up camp, enjoy the view, respect the cliff. None of this crazy kid running around business of the sites below. 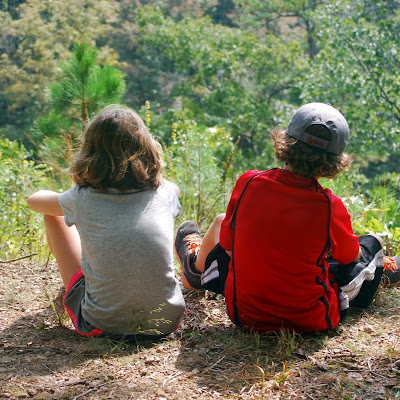 Sunday morning, M got up early and hiked around with the camera for awhile. It was cooler and wetter, after a long night’s washing. 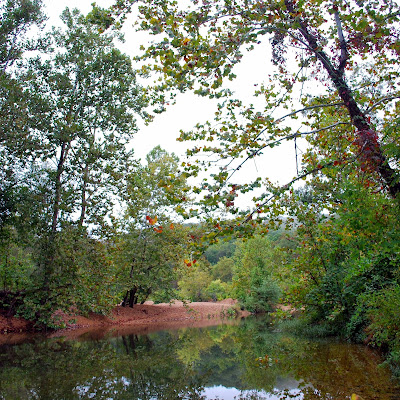 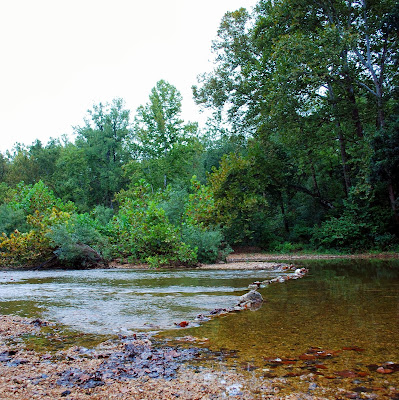 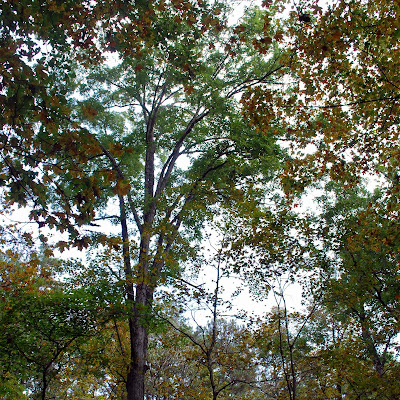 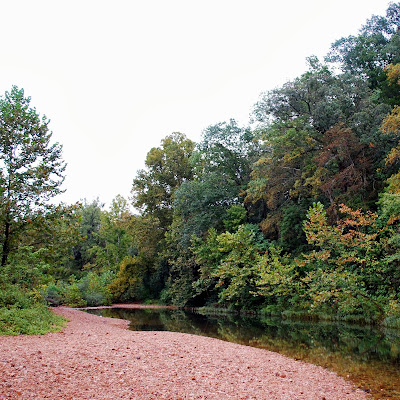 And then we packed up soggy tents and the sun came out, so we headed to a second little beach as pretty as the first. 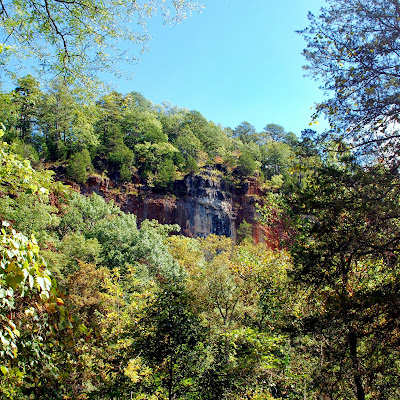 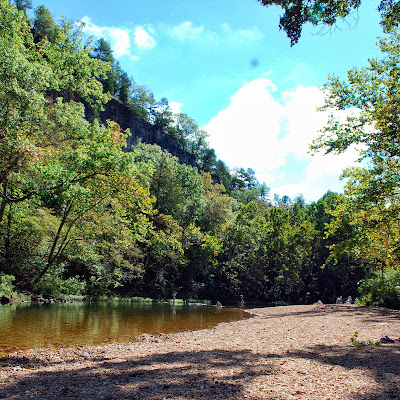 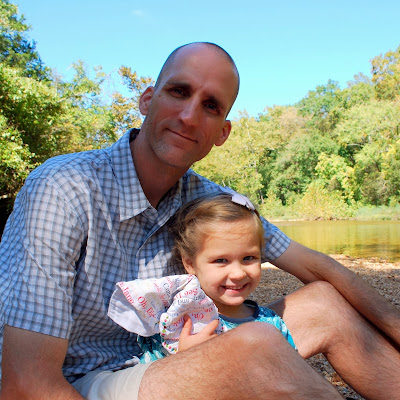 Later we packed up two sleepy, sleepy girls and headed back home, to laundry and homework and phone service. Last week was so hectic the four of us never set down to the table once together – a rarity for us. Perhaps hanging out in a tent together through a rain storm is a bit of the extreme in the other direction – but it was so nice to unplug and hang out together again. Pit toilets excluded. 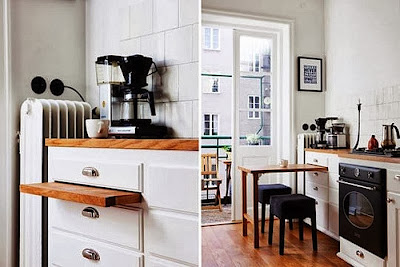 Bolaget via Remodelista
When I cook, the little one always insists on helping. She’s just at the right height for standing on a chair and reaching the countertop, but she tends to lean into the countertop, pushing the chair out from under herself. It can get a bit harrowing. I usually set her up at the kitchen table instead, but then my back is to her a lot, which can also get a bit harrowing. I may have mentioned she’s a bit of a go-getter before, taking things into her own hands, even small appliances and sharp utensils.
She frequently cooks at school, and is pretty familiar around the kitchen, even for a four-year-old. When I saw this image I realized what the perfect solution would be. This lovely pull out countertop at a right angle to the main work station! Can you imagine it at just the right height for a standing child? Perfect. I love the way the legs fold up into slots on the underside (not shown, but I studied it closely enough to determine it so – either that or magic). I’ve seen lots and lots of pull out cutting boards, but they can’t cantilever out too far and remain sturdy, and I always think of random bits of onions flying into the gap between cutting board and cabinet. But the legs allow this thing to fully extend – and even if there’s just some lettuce tearing or recipe reading going on – there’s a nice adjacency to the idea, while still being separate enough for the cook (me) to not lose her mind.
I have so many little ideas percolating in my head for a future kitchen project. Alas, the girls will be so tall by then that this won’t be necessary, but I thought I’d share it anyway. 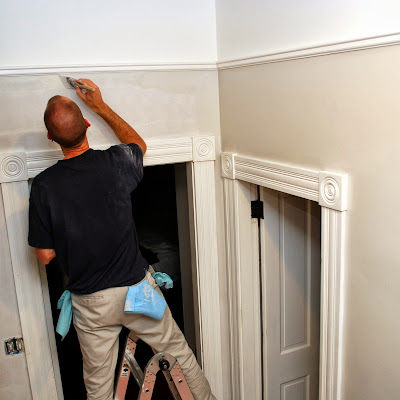 August and September have brought some pretty intense schedules around these parts. Travel, meetings, work, and a lot of time off of work, juggling around doctors and sickness and jury duty, etc. So last weekend M planned to catch up in the office and catch up at home while the girls and I were out of town. When those plans fell through we decided to try and stick with a portion of that plan anyway. Plan A (no wife and kids) meant that he could remove all the stair treads and leave them off for the weekend. The stair treads are bolted through heavy steel brackets and the massive stair stringers (all exposed) six times. Each. Times thirty-three stringers. It’s not an easy on-off relationship. Plan B (wife and kids) meant that he had to be much more careful with tread removal, and we had to stay out of the house as much as possible. It made for a pretty exhausting weekend for everyone.
Here’s why the stringers need to come off the wall – the don’t actually touch the wall at all. Our stair is a floating stair that only attaches at the bottom and the top. It’s held away from the wall by one inch – and that inch is impossible to work within – with a drywall knife, a sander, all the electrical work he’s been doing lately, and then finally, with a paintbrush or roller. 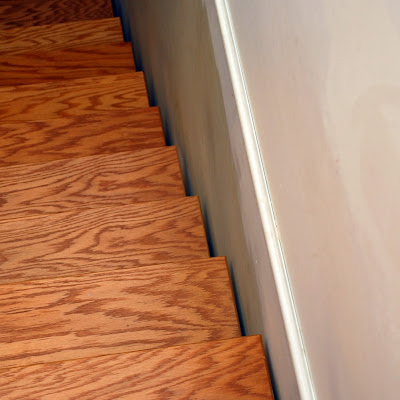 He did manage to remove just a few random treads when he was rewiring the stair lights a few weeks back, but even then it was a little freaky to walk up our already floating stair (with open risers) and then skip over a huge gaping hole every few treads. We would always make sure to lock F’s door gate at night, and put big barriers at the top and bottom of the stairs just to startle / wake up any random late night wandering. And then I would dream about the fire alarms going off and the two of us dashing up the stairs to rescue the girls, only to step through the first hole, plunging to the floor below. So I’d stack up a few more barriers, and M put up the ironing board as well. If the fire alarm had actually gone off, we would have slumber-stumbled into all that stuff and ended up more annoyed than scared. It didn’t stop the weird dreams.
The alternate (temporary) fix was to reinstall the treads with only two of the six bolts – they technically weren’t going  anywhere when affixed that way…but they did squeak and moan and give just a tiny, tiny bit when you stepped on the loose ones – enough to be a little unnerving when running up and down them.
I talk about the design of the stair more in depth here and here, but I will say this about it now. There is a reason we have pushed this work off for thirteen years. It’s not easy, and it’s not fun. It’s the room that will not end. You think it’s merely a dining room, but it’s not. It’s a dining room with a ceiling that morphs into a stair that turns into a second floor hallway with a ceiling that again turns into stair and then you have a third ceiling and now you’re thirty-five feet up in the air and you can see slivers of the floor thirty-five feet below. If you don’t like heights, this is not the house for you. There was quite a bit of drywall work – mudding and sanding to do in here, and the process can seem endless at times.
But after a hard weekend push by M – with some additional late night help from me (2:45am on Saturday) – we managed to get quite a bit done. It’s a lot of surface area – priming, painting, cutting in around windows, doors, stairs, etc. There’s at least another hard weekend push or two to get it finished. The new paint looks so, so good in there, that it’s hard to get discouraged. I’ve got big plans for these big walls.
We did get the light fixtures ordered for the four new locations and they will be in Friday. We went with the Lucy pendants (similar to the one below, but with a shorter stem for the wall mounted ones) to match the rest of the stair lights. 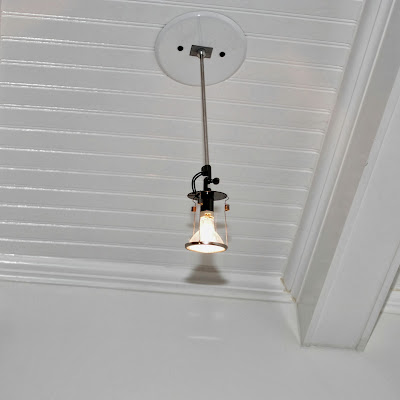 They are now discontinued, but we were able to locate the parts that we needed from a supplier. We still have to purchase a remote transformer since they are low voltage – we already have one transformer for the stair lights on the third floor. We’re going to be so light and bright and coordinated, we won’t hardly recognize ourselves as we move from floor to floor, effortlessly, and with no hole-jumping.