The question I get asked the most is – where’s the beef? Well, it’s generally phrased in a slightly different way, like “I noticed that you eat a lot of vegetables and grains… are you vegetarians?” The answer is simple, and complicated.

I asked M if he would write up a little something about why he decided to become a vegetarian, but he declined. He said it wasn’t really anything to write up – he simply decided to not eat meat, and now he doesn’t. He was not a vegetarian when he lived in South Africa towards the beginning of graduate school, and he was one when I met him right at the end of school. Simple as that.

I am not a vegetarian – in fact, I enjoy eating meat and I don’t have any ethical reasons against eating it. (Trust me, I have plenty of ethical concerns related to meat, but it can occasionally be found on my plate.)  I have never been a voracious carnivore – I much prefer a really, really good steak on my birthday once a year to weekly (or daily) meat of no consequence, or flavor (I’m looking at you, grilled chicken breast). Our girls eat meat at school and at restaurants and occasionally at home, but for the most part, we eat a vegetarian diet around here.

M was out of town for the three day weekend last week, so Sunday night I had leftovers and I fixed the girls one of the dinners I had prepared last week at Time For Dinner. It was essentially chicken tenders coated in a cornflake and parmesan breading, and it was decent, but nothing too spectacular.

Monday I was home with the girls, and I decided to make one of our favorite dishes – Heidi Swanson’s Stuffed Shells. Her blog is one of the few food blogs that I follow, and her Super Natural Every Day cookbook is a go-to resource for us at least once most weeks. The lemon zest brightens everything in this recipe – nothing is tricky at all about it, it just requires a little bit of prep time – the boiling, the sauce making, the assembling. I made it just after lunch – all the way through assembly – and then M threw it in the oven to finish when he got back home from his trip.

This past week was going to be a busy one for us – M had nightly projects to do around E’s school leading up to the open house on Saturday, and then I had a reception to plan and throw for it as well. We opted to cook the other Time For Dinner meal I had assembled, and I moved it from the freezer to the fridge on Tuesday morning to defrost. I arrived home on Tuesday evening to find grilled cheese and tomato soup going – the TFD black bean soup was still a solid chunk of frozeness in the refrigerator. (Illustrating my point – to myself – that freezer food that has to be defrosted and still cooked for another hour isn’t really convenience food to me.) The soup continued to defrost in the fridge for a few days – saved for lunches over the weekend. 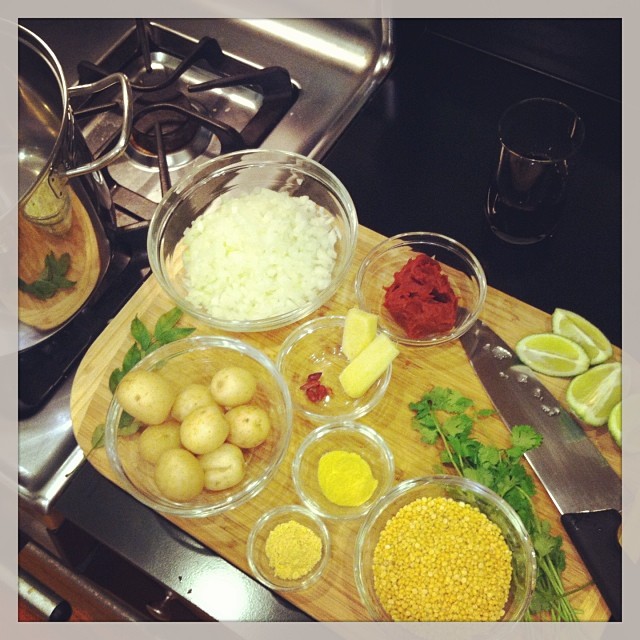 This week we opted for a Blue Apron box (I’ll write more on it next week), and so Wed / Thurs / Fri meals were already shopped for! Wednesday night’s dinner was Bangaladumpa Upma Koora (what a mouthful of a name!), and it was delicious. There were so many things I loved about this meal – beyond the actual food itself. I loved the fact that it had so many things that I had never cooked with and wouldn’t even know where to start to find. I read the detailed information about the meal to the girls at the table, looking up asafoetida spice to 1. figure out how to pronounce it, and 2. learn why it was used in the dish. It’s a powder derived from the sap of a plant in the fennel and carrot family, and it’s used to flavor foods eaten by people who practice Jainism and adhere to a very strict vegan diet, including the exclusion of potatoes and many other root vegetables. The spice, once cooked, smells and tastes of onions and garlic, so it’s beneficial to a diet that excludes the use of those flavoring agents. It led us to look into exactly why root vegetables are excluded, and the conversation around dinner was pretty interesting. If you can get your hands on the ingredients, I highly recommend this recipe – it’s not difficult to make, and it’s so very, very good.

Thursday night we had Cacio e Pepe pasta – traditionally, a favorite dish of mine that we haven’t made in a very long time. The twist on this recipe was the turnip greens in the sauce (and the fresh turnip pasta) – and the turnips themselves were sliced with pears and tossed in a homemade lemon vinaigrette that E made. Again – a fairly simple dish to prep and make, and a recipe that we will be making again. We only purchase the two serving meals from Blue Apron – often they are enough to feed all four of us, but we also add fruit and sometimes cheese or yogurt or another vegetable to the table to stretch things out and to give some other options for the less adventurous. I served up small amounts of the peppery pasta to both girls, and F promptly skipped over everything else on her plate and devoured hers and then started in on mine.

Friday night was supposed to be the last meal from BA – but by Friday we were both feeling overwhelmed with our to-do list for the evening. M took the girls out to dinner and over to the Magic House while I came home, ate a quick bite of leftovers and headed out to the grocery and back to bake the night away. We pushed off Friday night’s plans until Sunday – so more on that next week!

Saturday night was Date Night – and I capitalize that for a reason. We were simply not able (or in the mood) to do much going out during the last half of last year, but we’re trying to do better this year. I lined up a sitter early in the week, and after a late afternoon family nap on Saturday, the two of us headed out to Planter’s House for dinner / drinks. I’ve been really excited for this opening – I’ve admired (and enjoyed) Ted Kilgore’s skills at Niche / Taste, and the evening didn’t disappoint. Make sure you choose the seat at the table with the view of the bar, and enjoy the show. I’d recommend the Dutchtown Collins (enough to order a second) and the mussels in a butter broth were divine. Don’t leave without the donuts for dessert. Another waiter walked by as I was sopping up the remnants of my dinner with toast, and he sort of nodded and stated, “the donuts, right?” – not because he could read our minds, but apparently because what else are you going to say? The donuts, right? New forks were placed on our table, and within a minute the donuts were there.

The perfect ending to a great meal, and a busy (but delicious) week of eating.