I spent quite a few minutes this spring sitting in waiting rooms – lots of doctor appointments and x-rays. I won’t say all of those minutes were super productive (um, Candy Crush), but I did manage to scribble and fill half a notebook with kitchen and addition and garden ideas. One of those turned into a list of kitchen tools that we use on a regular basis. I made a list (and was surprised at how very long it was). I challenge you to do the same and see if you find it’s the same way. It’s really incredible how much lurks beyond the cabinet doors.

I see our new kitchen as having three zones:

I focused first on the galley area, which conveniently divides into three different zones: 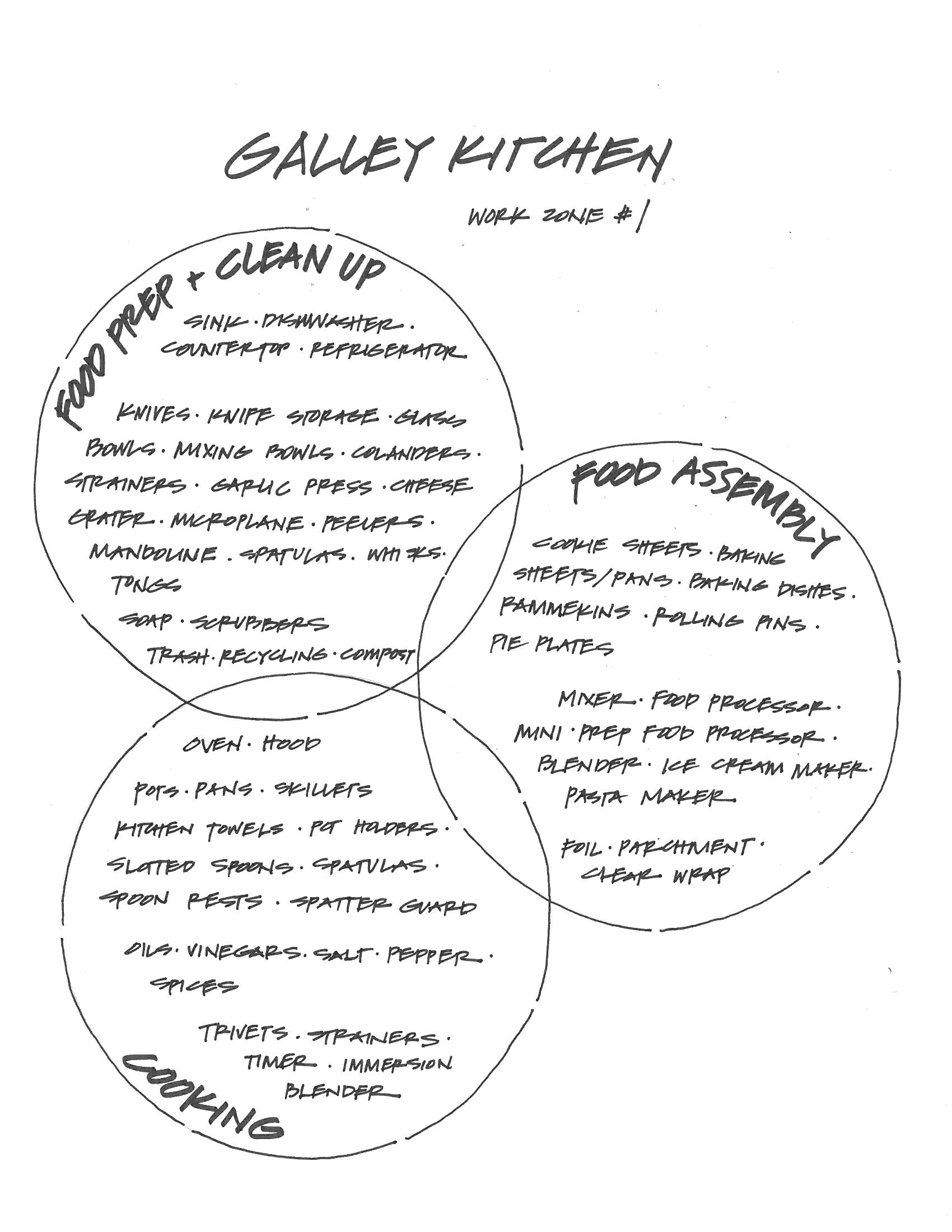 I group Food Prep and Clean Up together on purpose – first, because I like to do those two things together as much as possible, and second, because everything really comes full circle between those two zones. Additionally, if my blog posts were required to have some sort of thesis statement instead of being a random collection of thoughts and images, mine might just be a personal theory that the Food Prep + Clean Up is the main reason why people “don’t like to cook / never cook / think cooking is hard”. I get it, because that is exactly what I thought. I had to be very intentional about changing my thinking (and habits) in those two areas.

Cooking (and baking) is messy. You can confine yourself to recipes that have “Easy’, Ten-Minute-, No Mess-, One Pot-, No-Prep-” title starters if you’d like, and maybe they’ll even work for you. But those recipes are usually assembly recipes – putting together a few already assembled parts. It’s starting with whole ingredients and ending up with dinner that makes the big mess – there’s chopping and pouring and measuring and mixing and roasting and plating and dozens of other -ing verbs involved. Even if you don’t pre-assemble all your ingredients in little glass bowls like I obsessively do, it still uses tools, and tools require cleaning. In those early days of trying to wean myself off of food assembly, the transition to cooking was a huge mess. Dinner would get on the table, but the rest of the kitchen looked like a crime scene – if the crime committed was dirtying every single bowl and spatula and skillet in a fifty mile radius. Dinner would end and then we’d have to face the music – or simply go upstairs and ignore it. Ignoring it meant there was no room to make breakfast, and the cycle would continue – we’d arrive home tired and hungry, and the prospect of tackling the kitchen for half an hour before we could even start to make dinner was discouraging. A messy sink is the gateway drug to takeout.

I’ve tried to fight through the messy sink syndrome while cooking, but the results are never pretty because the Most Important Step of all is overlooked – Food Prep. Food Prep is often that hidden little time-suck gem at the start of a recipe. It disguises itself in the ingredient list and can look very innocuous – one yellow onion, chopped, two gloves of garlic, finely minced, 8 oz of tofu, drained and pressed, or the worst kind – one cup of roasted tomatoes (see page 214), and page 214 requires five different ingredients, a preheated oven and 45-50 minutes of roasting time before you can even think about starting on dinner. I’d start to do the math in my head, and because I didn’t want to eat dinner at nine o’clock that night, I’d be lured into combining the food prep step with the clean up the last night’s mess step. I’d get water boiling on the stove, oven preheating, skillet warming – all while unloading the dishwasher and reloading it. Onions and garlic would need to go in first, but then I’d realize they just need a super quick hit before burning, and meanwhile I’ve still got to find, rinse (in a loaded sink), measure and chop the next steps, and before I knew it the garlic was burning and the water was boiling over and I was resorting to quick stashing everything onto any open surface in an effort to salvage dinner.

Lightbulb moment. The kitchen has to be clean when you start. The ingredients need to be assembled. The tools need to be out and ready, before you begin. I make myself do this in a very simple way. I pull everything on the list out onto a clean countertop. I prep every single item in the recipe and place it in a bowl at the ready. I arrange it all on the cutting board, snap a photo (you know the drill Instagram buddies), and then I start. Sometimes recipes have downtime in them, but instead of cleaning or frantically prepping for the next step, I can set the table or enjoy a glass of wine or hand wash some of those tools I’m done with, or read a book or two to the little one.

Sometimes recipes are as simple as prepping ingredients and then cooking with them. Some have some middle steps that require assembling the prepared ingredients into another form – baking always does. Knowing how I like to organize the act of cooking and baking helps me better think through how I want the work horse of the kitchen to be laid out – from left to right – getting out ingredients from pantry and fridge, food prep and cleanup in the first zone, assembly in the middle (including the island, not shown yet, for larger baking endeavors), cooking at the end. Understanding exactly which tools and appliances / fixtures we use during each step will help us better plan the storage aspect of the kitchen as we move into more detailed drawings.