I haven’t been to bed before midnight in a week, and I’ve promised myself to be there by ten tonight. That’s in eleven minutes, so I’m typing at breakneck speed – I’ll do a quick edit in the morning and then post this. I’m just so excited to have a camera again, and so I’ve been playing around with it some this weekend. I shot some of these photos early this morning, and I was pretty rushed to get out the door to set up for the annual soiree at the girls’ elementary school. I’m glad I took the time to take the photographs though, I love to look back on these each year. There are a few process shots thrown in as well.

This year’s theme was Super Soulard Soiree – it had a pop art / comic book / super hero kind of vibe to it. I decided to take this really bold, graphic approach with paper as my medium, which gave the posters a really nice handcrafted feel. The top poster above was the crowd favorite, and the last one that I completed. E punched green paper with a hole punch for an hour while I glued the dots on in a grid to form the planet. Then I used two shades of gray to make the buildings, assembling them around the globe. I wove curved rainbow streamers through the building, and this poster was called “Save the World”. It featured lots of civic and good citizen minded prizes, plus a large gift certificate to Peacemaker Lobster & Crab just around the corner from us.

I loved this second poster – “Kryptonite”. The description asked “What’s your kryponite?” – carbs, beer, working out, etc. I drew inspiration for the background from Lichentstein’s Still Life with Crystal Bowl, and cut dozens of black strips of paper. Then I made dimensional green kryptonite exploding in the center. I love the way it turned out. A bird pooped on it at the end of the event, so maybe pigeon poop is your kryptonite!

The idea I got most excited about was for this third poster, “What’s Your Super Power?” The prize was full of experiences – music, art, fitness – so many different things to try out and explore. I decided to take inspiration from Warhol’s Campbell’s soup cans, and opened three of them, with some comic book bubbles asking the questions Could I? Should I? Maybe I Will. At one point I entertained the idea of doing the Campbell’s logo, but even I have my limits. I actually like the simplicity here.

The last poster was “Lightning Power for a Rainy Day” – it had so many awesome things to do in the summer when it’s raining outside. I had plenty of inspiration for this one last week. The BAM! in the center is dimensional with gold and red sticking out, and I love how the white dot pattern – stretched out into raindrops – turned out. Lots of measuring and marking on these four posters to get them to turn out right.

The afternoon was perfect – sunny, 70, with a light breeze. The decorations were so much fun – my friend Becky orchestrated all of that, and there was a great crew there Sunday morning setting everything up.

I’ve heard rumors it was the most successful soiree to date – which is really exciting to hear after all the hard work from everyone.

I “borrowed” a few of the centerpieces, and tucked them around the house. I was seriously worn out by dinner time, but rallied to do a few more things before bed. My goal this week is to be in bed by 10pm each night – we’ll see how that works out! It was nice to celebrate and visit with friends on such a beautiful afternoon.

I decided a few weeks back that I would send F off to Kindergarten in the same way I sent E off six years ago – with cookies. I planned to make some for all of the teachers and staff at her former school (sob), and for everyone at her new school as well. I wanted to make the same school house cookies for her new school that I made when E started there because they are big and fun and a little bit over the top, which is a good way to usher in the new school year. But I told F I’d let her dump out the hundreds of cookie cutters I have and pick out some for her goodbye gift. (I also threw in a little fine print to that offer – I reserved the right to veto, if necessary.) She loved looking through all those cutters, but other than gravitating towards the giant copper snowflake cutters (because they are Frozen-like, and honestly “Let it Go” isn’t a completely horrible idea for a send off), she really reserved her final decision for the giant bucket of letters. “I want to make them a message,” she said, and so we did.

F was thrilled this morning when she saw them finished, and I stood on a chair to take pictures as she removed one letter at a time from the table, promising her I’d print out a picture of them and “make them move”. We worked like a team this morning, getting them all organized, wrapped and ready. I made them colorful, like preschool, but I also added a little texture to the icing, rolling a serrated wheel across them to create a subtle quilting pattern. I piped on white icing like stitches around the edges. School has been exciting and fun for both of our girls, but it’s also been a source of comfort and support for our whole family. Bits and pieces of all sorts of experiences and little scraps of tender moments – the image of a patchwork quilt coming together from many hands and many fingers feels like a fitting way to describe the way these eleven years have helped to prepare our girls for bigger worlds.

I know it’s just a little cookie, sweet for a moment in time, and then gone again. It’s not a big thing at all. Eleven years seemed so big and vast and long until it wasn’t, and now it’s small. It’s hard to know how to say thank you for the tiny, patient rows of stitches, holding fast.

Posted on August 3, 2011 | Leave a comment
Several different moments of thought and conversation over the past few days have led me to the point of this blog post.  Here are a few of those threads… a conversation about the cost of a language learning system, and the ease with which I fell into speaking conversational Italian  (years ago) by actually conversing with others in Italy… an obsession with thinking back to where I was “ten years ago today, or three months ago this week, or how I’ve been a member here for fourteen years, or I’m five years removed from that… (all of that brought on, I’m sure, by the fact that we are attending M’s twenty year reunion shortly)…a random stumble upon this blog, and then this one…an NPR bit about the stagnant economy in Southern Europe…the train station scenes in the final Harry Potter movie that we saw on Saturday night…my near constant thoughts of escaping to a beach in my vacation-less year, and remembering what it was like to live for months on end with a view of one right outside my bedroom window.
And all that leads back to Genoa, Italy.
So I got excited for a moment and thought I might spend a few days scanning in some of my pre-digital photos from my life there, some sketches I made along the way, some faltering Italian (if I can remember it) and a few good stories I have that usually revolve around food or train stations.  And then I remembered that my photo albums, my sketchbooks, all of it – packed up in boxes and sitting in the basement waiting for a finished living room project that never comes.  So I’ll put that on hold, and revisit it again, when the boxes come back up to sit around in the house.  To say that this has been a difficult summer would be an enormous understatement.  The proverbial straw lies shattered beneath the feet of my personal camel, and no amount of bacio gelato is going to make me feel better.
I’ll get there, I promise, but don’t mind me if I escape to previous lives every once in awhile.  Previous lives where I called this place home. 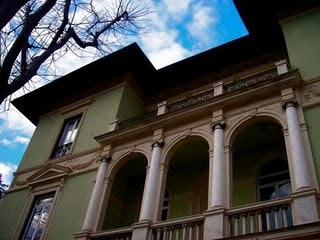 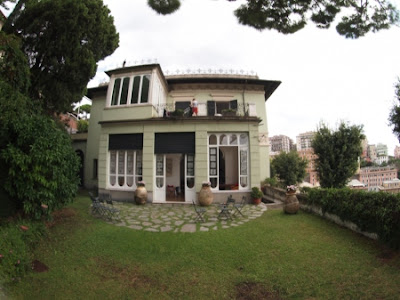 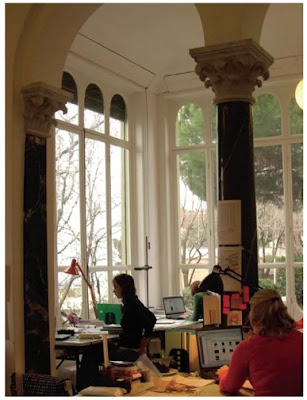