scenes from the end of a weekend

Sunday afternoon, E and M returned from their weekend Girl Scout camping trip (where they managed to dodge the thunderstorms and rain we had at the house), and everyone reunited over a late lunch at the Mud House. When we got back to the house we headed outside – E wrapped up a few things on her science fair project, M put away tarps and tents, and F climbed trees and painted rocks and sticks. We had a late dinner and by the time everyone was in bed it was late.

E used to fall asleep in her books all the time, but F never does. She usually reads to herself for a few minutes, calls down to us that she’s turning off her reading light, and then goes to sleep. Last night she never called down, but it was strangely silent up there. An hour later, as we were headed to bed, we checked on everyone and there she was – frozen in time.

And so we kick off another busy May week – wishing I had just one more weekend day in me first. 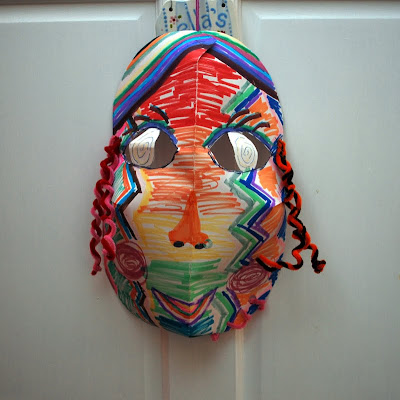 This is a giant mask that E made earlier in the summer.  It hangs on her doorway, and I stare at it each night as I’m falling asleep.  Why, you ask, do I stare at something on her door as I’m falling asleep?  Well, it’s because I’m sleeping in E’s bed, F is sleeping on her crib mattress on the floor of E’s room, E’s sleeping in my spot in my bed next to M who is hardly sleeping at all (like the rest of us).  Let’s just call it the perfect storm of sickness, emergency home repair, an enormous to-do list, stressful jobs and the summer from hell, and leave it at that.
At least I have this mask to gaze at and remind myself that no matter how bad it gets, I don’t look quite as crazy as this lady.
Yet. 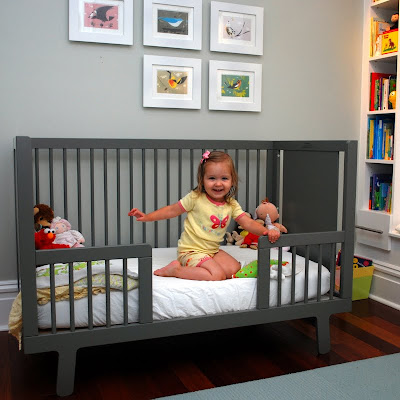 After the late night arrival of a friend’s new baby twins, I had trouble falling asleep.  Those nights of worry never really go away once you’re a parent – and even when your worry is focused on others’ babies, the anxiety hits so close to home.  Earlier in the evening M transformed the little one’s crib into a “bid-durl bet” (big girl bed), and the joy – oh the joy! it inspired was priceless.  I’m hoping the newness wears off in a few days and she crawls back into my lap for extra books instead of listening to them from her bed, but for now it’s just such an exciting thing.  I’m still not quite sure why we did it – she wasn’t climbing out of her crib, and she’s just now two.  I just think that we tend towards transitions when things are calm and smooth and the timing seems easy – maybe even early.  Because when the timing is late and things are done out of necessity and frustration it’s never quite as nice.  Two nights into it, and she stays in there.  In fact, this morning she stretched luxuriantly and closed her eyes to the sun I let into the room.  Proof that we’ve added one more future snooze button-er to the ranks. 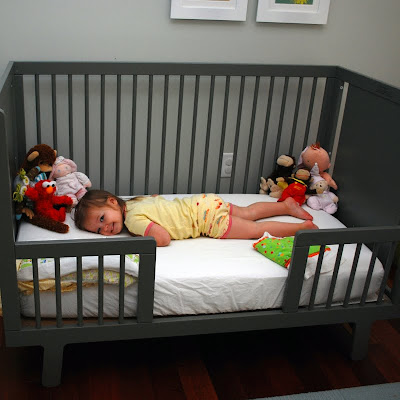 We bought the conversion kit shortly after we got the crib.  We loved the crib so much that we thought we might get some extra use out of it as a smaller bed before moving her into a standard bed.  This configuration gives more play area in the middle of the room too, and it seems to meet her “nesting” needs – I just went up to check in on her and she’s all bunched up in one corner, lying across the bed, feet through the slats, just as she did when it was a crib.